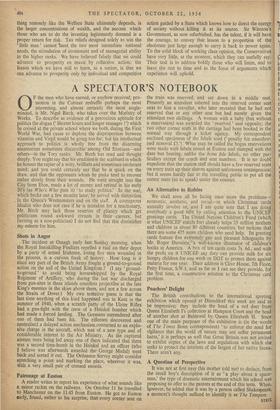 Page 6, 22 October 1954 — The incident at Omagh early last Sunday morning, when the
Close

The incident at Omagh early last Sunday morning, when the

Royal Inniskillings Fusiliers repelled a raid on their depot by a party of armed Irishmen, losing five men wounded in the process, is a curious freak of history. How long is it since any part of the British Army fought aground-to-ground action on the soil of the United Kingdom ? (I say ` ground- to-ground' to avoid being horsewhipped by the Royal Regiment of Artillery, who during the last war discharged from gun-sites in these islands countless projectiles at the late King's enemies in the skies above them, and not a few across the Straits of Dover.) My own tentative guess is that the last time anything of this kind happened was in Kent in the summer of 1940, when a scratch party of the Ulster Rifles had a gun-fight with the crew of a Heinkel bomber which had made a forced landing. The Germans surrendered after one of them had been hit. The riflemen discovered and neutralised a delayed action mechanism connected to an explo- sive charge in the aircraft, which was of a new type and of considerable interest to the Air Ministry. As the captured airmen were being led away one of them indicated that there was a second time-bomb in the Heinkel and an officer (who j believe was afterwards awarded the George Medal) went back and sorted it out. The Ordnance Survey might consider stretching a point and marking the place, wherever it was, Ifith a very small pair of crossed swords.