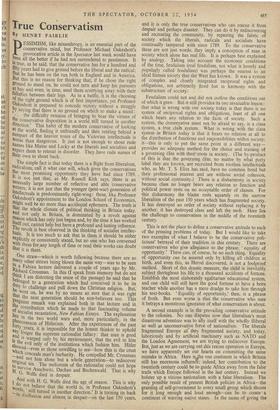 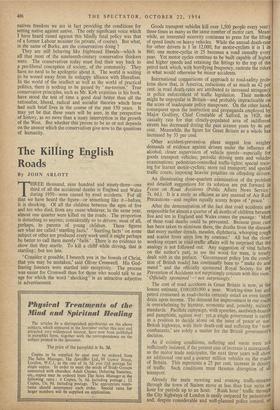 BY HENRY FAIRLIE ESSIMISM, like misanthropy, is an essential part of the conservative mind, but Professor Michael Oakeshott's provocative article in the Spectator last week would have been all the better if he had not surrendered to pessimism. It is true, as he said, that the conservative has for a hundred and fifty years had to give ground before the liberal and the radical; that he has been on the run both in England and in America. But this is no reason for thinking that, if he chose the right Wound to stand on, he could not turn and keep his pursuers at bay and even, in time, send them scurrying away with their fallacies between their legs. As in a battle, it is the choosing Of the right.ground which is of first importance, yet Professor Oakeshott is prepared to concede victory without a struggle !:,), saying that there is no ground on which to make a stand : • • . the difficulty remains of bringing to bear the virtues of the conservative disposition in a world still turned in another direction.' This habit of the modern conservative of looking at the world, finding it unfriendly and then retiring behind a rampart of the heavier tones of the Victorian intellectuals is Worse than dangerous. It just is not enough to shout rude names like Maine and Lecky at the liberals and socialists and expect them to retreat in disorder. They have rude names of their own to shout back.

The simple fact is that today there is a flight from liberalism, radicalism, call it what one will, which gives the conservatives the most promising opportunity they have had since 1789. It is not just that, as Mr. Russell Kirk says, there is an unusually large number of reflective and able conservative writers; it is not just that the younger (post-war) generation of intellectuals is predominantly right-wing: these, like Professor Oakeshott's appointment to the London School of Economics, might well be no more than accidental ephemera. The truth is that the whole climate of political thinking in Britain today. and not only in Britain, is dominated by a revolt against reason which has only just begun and, by the time it has worked Itself out cannot help but have a profound and lasting influence. The revolt is best observed in the thinking of socialist intellec- tuals. It is too much to ask that in them it should be either explicitly or consistently stated, but no one who has conversed with them for any length of time or read their works can doubt that it is there.

One straw—which is worth following because there are so many other straws being blown the same way—was to be seen _111. a Fabian lecture delivered a couple of years ago by Mr. Richard Crossman. In this (I speak from memory but do not Punk I am distorting the sense of the passage) he said that he belonged to a generation which had conceived it to be its duty to challenge and pull down the Christian religion. But, that Went on, he was by no means so sure that it was right wat the next generation should be non-believers too. This Pregnant remark was explained both in that lecture and in contribution which he made to that fascinating volume Of socialist recantation, New Fabian Essays. The explanation ;les in the two world wars and, more particularly, in the Phenomenon of Hitlerism. After the experiences of the past forty years, it is impossible for the honest thinker to uphold any longer the supreme rationalist fallacy : that man is good and is warped only by his environment, that the evil in him Is, the evil only of the institutions which fashion him. Hitler showed--even to those unwilling to see—how thin is the crust Which conceals man's barbarity. He compelled Mr. Crossman --and not him alone but a whole generation—to rediscover original sin. The meliorism of the rationalist could not hope to survive Auschwitz, Dachau and Buchenwald. That is why 11. G. Wells died in despair. And with H. G. Wells died the age of reason. This is why do not believe that the world is, in Professor Oakeshott's words, 'still turned in another direction.' It is turning its back in disillusion and almost in despair—on the last 150 years, and it is only the true conservatives who can rescue it from despair and perhaps disaster. They can do it by rediscovering and recreating the community, by repairing the fabric of society which the liberals, radicals and socialists have continually tampered with since 1789. To the conservative these are not just words; they imply a conception of man in society which alone has real life. It is perhaps best explained by analogy. Taking into account the economic conditions of the time, feudalism (real feudalism, not what is loosely and popularly called feudalism) was perhaps the nearest to an ideal human society that the West has known. It was a system of complex and closely integrated reciprocal rights and obligations, not arbitrarily fixed but in harmony with the substructure of society.

Feudalism could nyt and did not outlive the conditions out of which it grew. But it still provides its one invaluable lesson: that what is wrong with our society today is that there is no system of reciprocal rights and obligations, least of all one which bears any relation to the facts of society. Such a system, the donseqative must not be afraid to say, is a class system, a true claN system. What is wrong , with the class system in Britain today is that it bears no relation at all to the distribution of functions and responsibilities within society; it—this is only to put the same point in a different way— provides 'no adequate method for the choice and training of a governing elite with their" roots in society. (The by-product of this is that the governing elite, no matter by what party label they are known, are recruited from rootless intellectuals who, as Mr. T. S. Eliot has said, have no common bond but their professional interest and are without social cohesion, without social continuity.) There is a disharmony in society because class no longer bears any relation to function and political power rests on no acceptable order of classes. For this disharmony the blame rests squarely on the narrow liberalism of the past 150 years which has fragmented society. It has destroyed an order of society without replacing it by another; it has destroyed class and left the mob. Here lies the challenge to conservatism in the middle of the twentieth century.

This is not the place to define a conservative attitude to each of the pressing problems of today. But I would like to take two examples of what I believe to be the conservative poli- ticians' betrayal of their tradition in this century. There are conservatives who give allegiance to the phrase, ' equality of opportunity.' There can, of course, be no such thing. Equality of opportunity can be assured only by killing all children at birth, and even this, as Herod discovered, is not a foolproof method. Short of this drastic measure, the child is inevitably subject throlighout his life to a thousand accidents of fortune. Establish the most elaborately egalitarian educational system, and one child will still have the good fortune to have a born teacher while another has a mere drudge to take him through his text-books. ' Equality of opportunity,' then, is a phrase of froth. But even worse is that the conservative who uses it betrays a monstrous ignorance of what conservatism is about.

A second example is in the prevailing conservative attitude to the colonies. No one disputes now that liberalism's most disastrous adventure was to ally itself with the wholly, illiberal as well as unconservative force of nationalism. The liberals fragmented Europe as' they fragmented society, and today, laboriously and by artificial machinery such as NATO and the London Agreement, we are trying to rediscover Europe. But, just as we are carrying out this rescue operation in Europe, we haye apparently set our hearts on committing the same mistake in Africa. Here ishe one continent in which Britain still has enormous influena; indeed, her contribution to the twentieth century could be to guide Africa away from the false trails which Europe folloied in the last century. Instead we bolster up a vicious nationalism with a false liberalism. The only possible result of present British policies in Africa—the granting of self-government to every small group which shouts for it long enough and loud enough—can be to create- a continent of warring native states. In the name of giving the natives freedom we are in fact providing the conditions for setting native against native. The only significant voice which I have heard raised against this blindly fatal policy was that of a former Labour minister (in private, of course). But what, in the name of Burke, are the conservatives doing ? They are still behaving like frightened liberals—which is all that most of the nineteenth-century conservative thinkers were. The conservatives today must find their way back to a pre-liberal conception of society, of the community. They have no need to be apologetic about it. The world is waiting to be wooed away from its unhappy alliance with liberalism. In the world of the intellect as well as the world of practical politics, there is nothing to be gained by me-tooism' True conservative principles, such as Mr. Kirk examines in his book, have stood the test of time a good deal better than all the rationalist, liberal, radical and socialist theories which have had such brief lives in the course of the past 150 years. It may yet be that these years will be seen, in the perspective of history, as no more than a nasty interruption in the growth of the West. But whether this proves to be so or not depends on the answer which the conservatives give now to the questions of humanity.