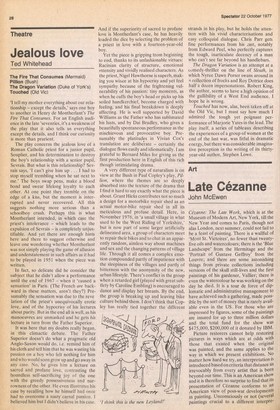 The Fire That Consumes (Mermaid) Pillion (Bush) The Dragon Variation (Duke of York's) Touched (Old Vic) tell my mother everything about our relationship — except the details,' says one boy to another in Henry de Montherlant's The Fire That Consumes. For an English audience in the late 'seventies, it's a weakness of the play that it also tells us everything except the details, and I think our curiosity is more than prurient.

The play concerns the jealous love of a Roman Catholic priest for a junior pupil, Souplier, and his determination to destroy the boy's relationship with a senior pupil, Sevrais. But what is this relationship? Sev rais says, 'I can't give him up I had to stop myself trembling when he sat next to me.' The boys swap pens, make a blood bond and swear lifelong loyalty to each other. Al one point they tremble on the edge of a kiss, but the moment is interrupted and never recovered. All this suggests nothing more serious than a schoolboy crush. Perhaps this is what Montherlant intended, in which case the priest's intolerance — which leads to the expulsion of Sevrais — is completely unjustifiable. And yet there are enough hints here and there to suggest otherwise and leave one wondering whether Montherlant was not simply playing the game Of allusion and understatement in such affairs as it had to be played in 1951 when the piece was written.

It was here that my doubts really began, in this climactic debate. The Father Superior doesn't do what a pragmatic old Anglo-Saxon would do, i.e. remind him of his cloth and tell him that he was wasting his passion on a boy who felt nothing for him and who would soon grow up and go away in any case, No, he gives him a lecture on sacred and profane love, contrasting the boundless self-sacrificing joy of the one with the greedy possessiveness and narrowness of the other. He even illustrates his case by recalling how he himself had once had to overcome a nasty carnal passion. I believed him but I didn't believe in his case. And if the superiority of sacred to profane love is Montherlant's case, he has heavily loaded the dice by selecting the problem of a priest in love with a fourteen-year-old boy.

Yet the piece is gripping trom beginning to end, thanks to its unfashionable virtues: Racinian clarity of structure, emotional intensity and vividly realised characters. As the priest, Nigel Hawthorne is superb, making you wince at his hypocrisy and yet feel sympathy because of the frightening vulnerability of his passion: tiny moments, as when he cuffs the boy's head or picks up his soiled handkerchief, become charged with feeling, and his final breakdown is deeply affecting. He is well supported by David Williams as the Father who has sublimated his lusts, and by Dai Bradley, who gives a beautifully spontaneous performance as the mischievous and provocative boy. Presumably the platitudes in Vivian Cox's translation are deliberate — certainly the dialogue flows easily and idiomatically. I am grateful to Bernard Miles for giving us the first production here in English of this rich though intimidating drama.

A very different type of naturalism is on view at the Bush in Paul Copley's play, Pillion, where the themes are so deeply absorbed into the texture of the drama that I find it hard to say exactly what the piece is about. Grant Hicks contributes not so much a design for a motorbike repair shed as an actual motor-bike repair shed in all its meticulous and profuse detail. Here, in November 1976, in 'a small village in what used to be the West Riding of Yorkshire,' but is now part of some larger artificially delineated area, a group of characters meet to repair their bikes and to chat in an apparently random, aimless way about machines and sex and the changing patterns of village life. Through it all comes a complex emotion compounded partly of impatience with the sleepiness of the villages and partly of bitterness with the anonymity of the new, urban lifestyle. There's conflict in the group when a retarded girl (played with great subtlety by Caroline Embling) is encouraged to dance and display her breasts. By the end, the group is breaking up and leaving bike culture behind them. I don't think that Copley has really tied together the different strands in his play, but he holds the attention with his vivid characterisations and easy colloquial dialogue. Chris Parr gets fine performances from his east, notably from Edward Peel, who perfectly captures the tough, inarticulate decency of a man who can't see far beyond his handlebars.

The Dragon Variation is an attempt at a comedy-thriller on the line of Sleuth, in which Nyree Dawn Porter swans around in R collection Of frocks and Roy Dotrice does half a dozen impersonations. Robert King, the author, seems to have a high opinion of the gullibility of a West End audience. I hope he is wrong.

Touched has now, alas, been taken off at the Old Vic, but I must say how much I admired the tough yet poignant performance of Marjorie Yates in the lead. The play itself, a series of tableaux describing the experiences of a group of women at the end of the last war, was fitful in dramatic energy, but there was considerable imaginative perception in the writing of its thirtyyear-old author, Stephen Lowe.