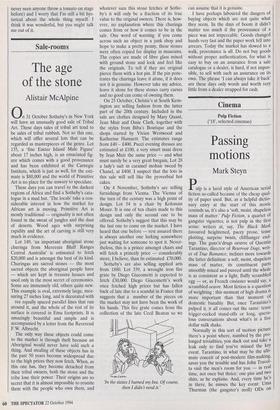 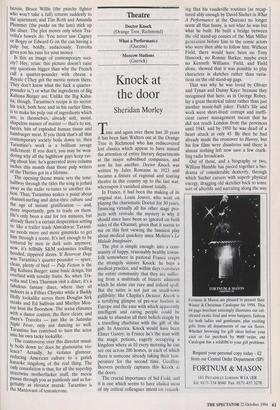 Pulp is a lurid style of American serial fiction so-called because of the cheap qual- ity of paper used. But, as a helpful dictio- nary entry at the start of this movie reminds us, it's also a 'soft, moist, shapeless mass of matter.' Pulp Fiction, a quartet of gangster vignettes, is not pulp in the first sense: writers at, say, The Black Mask favoured heightened, pacey prose, tense plotting, surprise twists, cliffhanger end- ings. The guns'n'drugs oeuvre of Quentin Tarantino, director of Reservoir Dogs, writ- er of True Romance, inclines more towards the latter definition: a soft, moist, shapeless mass of matter, its constituent parts smoothly mixed and pureed until the whole is as consistent as a light, fluffy scrambled egg — or, as French cineastes would say, a scrambled oeuvre. Most fiction is a question of weighting : this moment of high drama is more important than that moment of domestic banality. But, once Tarantino's pulped it, it all comes out the same: tense trigger-cocked stand-offs or long, queru- lous conversations about what's in a five dollar milk shake.

Normally in this sort of motion picture there's a point where, numbed by the pro- longed trivialities, you duck out and take a leak only to find you've missed the key event. Tarantino, in what may be the ulti- mate conceit of post-modern film-making, saves you the trouble and has John Travol- ta visit the men's room for you — in real time, not once but thrice: one piss and two shits, as he explains. And, every time he's in there, he misses the key event: Uma Thurman (the gangster's moll) ODs on heroin, Bruce Willis (the punchy fighter who won't take a fall) returns suddenly to the apartment, and Tim Roth and Amanda Plummer (the punks on the lam) stick up the diner. The plot moves only when Tra- voha's bowels do. You never saw Cagney or Bogey or Edward G on the can having a Pulp but, boldly, audaciously, Travolta gives you his runs for your money.

Is this an image of contemporary soci- ety? Hey, relax: this picture doesn't raise any questions bigger than why the French call a quarter-pounder with cheese a Royale (They got the metric system there. They don't know what the fuck a quarter- pounder is,') or what the ingredients of Big Kahuna Burger are. Unlike the Big Kahu- na, though, Tarantino's recipe is no secret: his trick, both here and in his earlier films, is to make his pulp out of ingredients which are, in themselves, already soft, moist, shapeless masses of matter — that's to say, faeces, bits of exploded human tissue and hamburger meat. If you think that's all that contemporary society boils down to, then Tarantino's work is a brilliant savage indictment. If you don't, you may be won- dering why all the highbrow guys keep rav- ing about him: he's generated more column inches this month than those pulp writers of the Thirties got in a lifetime. The opening theme music sets the tone: halfway through the titles the song is jerked away as the radio re-tunes to another sta- tion. Thus, Tarantino makes a point about channel-surfing and drive-thru culture and the age of instant gratification — and, more importantly, gets to trade on them. He's only been a star for ten minutes, but already there's a certain desperation setting In: like a trailer trash Almodovar, Taranti- no needs more and more gimmicks to get him through a scene. It's not enough to be tortured by men in dark suits anymore; now, it's hillbilly S&M sodomites trailing hooded, zippered slaves. If Reservoir Dogs was Tarantino's quarter-pounder — spare, clean, plenty of beef — Pulp Fiction is the Big Kahuna Burger: same basic design, but overlaid with novelty fruits. So, when Tra- volta and Uma Thurman visit a diner, it's a fabulous fantasy diner, where they sit indoors in a Fifties Chrysler while a Buddy Holly lookalike serves them Douglas Sirk steaks and Ed Sullivan and Marilyn Mon- roe host the floorshow. The scene climaxes with a dance contest; the floor clears, and there's Travolta — just like in Saturday Night Fever, only not dancing so well: Tarantino has contrived to turn the actor into his own tacky lookalike. The controversy over this director usual- ly boils down to: does he glamourise vio- lence? Actually, he violates glamour, reducing American culture to a garish karaoke singalong of the real thing. The only consolation is that, for all the superhip streetwise motherfucker stuff, the movie passes through you as painlessly and as for- gettably as elevator muzak: Tarantino is the Mantovani of testosterone.