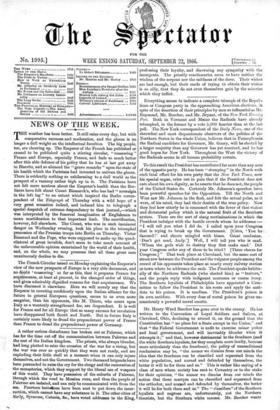 Page 1, 22 September 1866 — A rather serious disturbance has broken out at Palermo, which
Close

A rather serious disturbance has broken out at Palermo, which

has for the time cut off the communication between Palermo and the rest of the Italian kingdom. The priests, who always blunder, had long plotted to seize the occasion of the war for a rising, but the war was over so quickly that they were not ready, and are exploding their little shell at a moment when it can only injure themselves, and not the Government. Two thousand brigands have been persuaded to raise the cry for the clergy and the restoration of the monasteries, which they support by the liberal use of weapons of this world. They have possession of the suburbs of Palermo, through which the road to Messina runs, and thus the people of Palermo are isolated, and can only be communicated with from the sea. Fourteen battalions have been sent to put down the insur- rection, which cannot have any substance in it. The other cities of Sicily, Syracuse, Catania, &c., have voted addresses to the Sing, professing their loyalty, and disowning any sympathy with the insurgents. The priestly reactionaries seem to have neither the wisdom of the serpent nor the mildness of the dove. Their wishes are bad enough, but their mode of trying to obtain their wishes is so silly, that they do not even themselves gain by the miseries which they inflict.