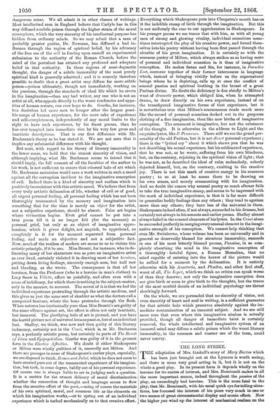 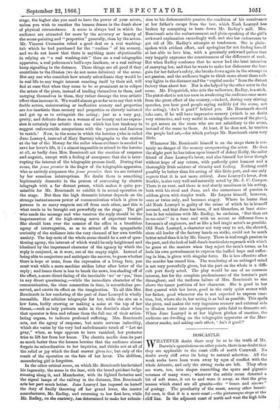 THE adaptation of Mrs. Gaskell's story of Mary Barton which has been just brought out at the Lyceum is worth seeing, and there is some very good acting in it, but it is not on the whole a good. play. In its present form. it depends wholly on, the heroine for its-centre of interest, and Ma% Bouoicanit makes. in. all the more important scenes, indeed throughout the passion of the play, an exceedingly bad. heroine. This is the more fatal to the play, that Mr. Boucieault, with his usual quick eye for telling situa- tions, has focussed the interest of his- piece very much in one or two scenes of great circumstantial display and scenic effect Now i the higher you wind up the interest of mechanical realism on the stage, the higher also you need to have the power of your actors, unless you wish to smother the human drama in the dumb show of physical circumstance. A scene is always bad in which the audience are attracted far more by the accuracy or beauty of the scene-painting and " properties " generally, than by the actors. Mr. Vincent Crummles relied a good deal on a real washing- tub which he had purchased for the "realism " of his scenery, and we do not know that there is anything more objectionable in relying on " a real washing-tub " than on a real telegraphic apparatus, a real policeman's bull's-eye lanthorn, or a real railway lamp signalling in the distance. These things are all good if they contribute to the illusion (we do not mean delusion) of the scene. But any one who considers how utterly subordinate they would be in real life to any tragic interest enacting itself by their aid, will feel at once that when they come to be so prominent as to eclipse the actors of the piece, instead of lending themselves to them, and merging themselves in them, they rather damage the true artistic effect than increase it. We would almost go so far as to say that with feeble actors, uninteresting or ineffective scenery and properties are less inartistic than scenery and properties so cleverly imitated and got up as to extinguish the acting ; just as a very gay, pretty, and delicate dress on a woman of no beauty and no expres- sion is certainly less artistic than one which has less tendency to suggest unfavourable comparisons with the ' person and features to match.' Now, in the scene in which the heroine (who is called Jane Learoyd, instead of Mary Barton) telegraphs to the station at the bar of the Mersey for the sailor whose evidence is needed to -save her lover's life, it i s almost impossible to attend to the heroine at all, so badly does Mrs. Boucicault act the emotion of suspense and anguish, except with a feeling of annoyance that she is inter- Tupting the interest of the telegraphic process itself. During that scene, the jeune premier is the finger of the telegraphic apparatus, who so entirely surpasses the jeune premire that we are irritated by her senseless interruptions. No doubt there is something legitimately dramatic in the process of conversing by electric telegraph with a far distant person, which makes it quite per- missible for Mr. Boucicault to exhibit it in actual operation on the stage. But then the high dramatic interest depends on the strange instantaneous power of communication which it gives to persons in so many respects cut off from each other, and this is what needs to be brought out powerfully on the stage. The girl who sends the message and who receives the reply should be the impersonation of the high-strung nerve of expectant tension. She should lean over the counter of the office in a breathless agony of interrogation, so as to attract all the sympathetic curiosity of the audience into the very channel of her own terrible anxiety. The key-note of the whole scene should be a sort of ques- tioning agony, the interest of which would be only heightened and idealized by the impersonal character of the agency by which the reply is conjured, as it were, out of the empty night. Instead of :being able to conjecture and anticipate the answer, to guess whether there is hope or none, from the expression of a living face, you must wait while a mere machine strikes letter after letter of the reply ; and hence there is less to break the news, less shading off of the effect, a more direct facing of the inevitable ' no' or yes,' than in any direct questioning,—while the immediate character of the -communication, the close connection in time, is nevertheless pre- served, and exerts its effect on the imagination. To all this Mrs. Boucicault in her rendering of the part of Jane Learoyd is wholly insensible. Her solicitor telegraphs for her, while she sits on a low form, feebly crowing or making a noise at the top of her throat,—such as lady patients make in the dentist's chair when that operator is firm and refuses them the full use of their articu- lating organs, to indicate profound suffering. Mrs. Boucicault -acts, not the agony of suspense, but acute nervous imbecility, -which she varies by the very bad melodramatic touch of "Let me ,pray," when, as hope appears to have vanished, her protector tries to lift her from her knees. The electric needle does its part so much better than the human heroine that the audience almost forgets its subordination to her inquiries, and thinks not at all of the relief or joy which the final answer gives her, but only of the result of the operation on the fate of her lover. The shiftless, maundering girl is forgotten.

In the other critical scene, on which Mr. Boucicault has lavished his ingenuity, the scene in the lane, with the broad quickset hedge running along it, and Manchester, with its lighted factories and the signal lamps of the railway in the distance, Mrs. Boucicault acts her part much better. Jane Learoyd has imposed on herself the duty of finally throwing off her grand lover, the master manufacturer, Mr- Radley, and returning to her first love, while Mr. Radley, on the contrary, has determined to make her submis- sion to his dishonourable passion the condition of his connivance at her father's escape from the law, which Noah Learoyd has broken by conspiring to burn down Mr. Radley's mill. Mrs. Boucicault acts the embarrassment and plain-speaking of the girl's awkward explanation exceedingly well, and also her endeavours to get rid of Mr. Radley's attempts at tenderness. She is plain- spoken with evident effort, and apologizes for not finding herself at last able to love him, with a genuinely awkward pathos that very happily expresses the consciousness of the difference of rank. But when Radley confesses that he never had the least intention of marrying her, and that he wants to make her dishonour the bar- gain for her father's safety, she breaks down again in the attempt to act passion, and the audience begin to think more about those rail- way lights in the distance and the "capital smoke" from the distant factory than about her. Nor is she helped by the other actor in the scene. Mr. Fitzpatrick, who acts the millowner, Radley, is a stick. The pistol-shot is not too soon in awakening the audience once more from the great effect of the scenery,—indeed, during very stirring speeches, you hear good people saying audibly (of the scene, not the acting), 'An't it good ?' behind you. Mr. Boucicault should take care, if he will have impressive scenery (which is no doubt very attractive, and very useful in causing the success of the piece), to get actors on the scene who are not subsidiary to the scene, instead of the scene to them. At least, if he does not, he teaches the people bad art,—for which perhaps Mr. Boucicault cares very little.

Whenever Mr. Boucicault himself is on the stage there is cer- tainly no danger of the scenery overpowering the actor. He does the slight part he has taken upon himself of Johny Reilly, the sailor friend of Jane Learoyd's lover, and also himself her lover though without hope of any return, with perfectly quiet humour and a thoroughly Irish mixture of vivacity and feeling. Nothing could possibly be better than his acting of this little part, and one only regrets that it is not more critical. Jane Learoyd's lover, Jem Starkie, is also very well and naturally acted by Mr. J. C. Cowper. There is no rant, and there is real sturdy manliness in his acting, both with his rival and Jane, and the earnestness of passion is seldom given with simpler truth. He forgets himself, however, once or twice only, and becomes stagey. Where he learns that old Noah Learoyd is guilty of the crime of which he is himself accused, and that Jane has been, if not blameless, at least stain- less in her relations with Mr. Radley, he exclaims, But thou art in-no-cent !' in a tone and with an accent as different from a foreman's of engineers, and as like a bad tragic actor's as possible. Old Noah Learoyd, a character not very easy to act, the shrewd, stern old leader of the factory hands on strike, could not be much better acted than it is by Mr. Emery. There is real rough passion in the part, and the look of half-dumb inarticulate reproach with which he gazes at the masters when they reject the men's terms, as he feels his own powerlessness to express the baffled hope and suffer- ing in him, is given with singular force. He is less effective after the murder has crazed him. The wandering of an unhinged mind is not very powerfully given, but the part on the whole is a diffi- cult part finely acted. The play would be one of no common interest, but for the complete predominance of the heroine's part throughout, and the uniform failure of Mrs. Boucicault to rise above the tamer portions of her character. She is good in her first quarrel with her lover, good in the early quiet scenes with her father, good whenever she is not expected to express emo- tion, but, where she is, her acting is as bad as possible. This spoils the piece, and makes the very ingenious scenery and external aids to illusion tower into an importance quite fatal to dramatic art. When Jane Learoyd is at her highest pitches of emotion, the audience are dwelling on the telegraphic apparatus or the Mau- cheater smoke, and asking each other, Ant it good?'