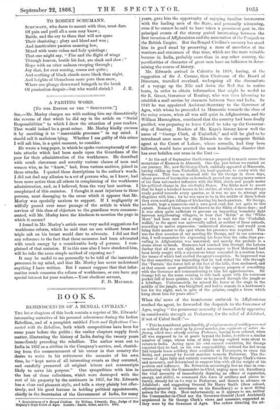 [To THE EDITOR OF THE " SPECTATOR."

Sin,—Mr. Morley charges me with making him say diametrically the reverse of that which he did say in the article on " Social Responsibilities" to which I drew the attention of your readers. That would indeed be a great crime. Mr. Morley kindly excuses it by ascribing it to " inscrutable processes " in my mind. I should call it malicious lying. Whether I am guilty of this crime I will ask him, in a quiet moment, to consider.

He wrote a long paper, in which he spoke contemptuously of cer- tain attacks which had been made upon the Guardians of the poor for their administration of the workhouses. He described with much cleverness and severity various classes of men and women who, as he " knew," had, from various motives, joined in these attacks. I quoted these descriptions in the author's words. I did not find any allusion to a set of persons who, as I knew, had been more active than all others in complaining of the workhouse administration, and, as I believed, from the very best motives. I complained of this omission. I thought it most injurious to those persons, most damaging to the cause which it appears that Mr. Morley was specially anxious to support. If I negligently or wilfully passed over some passage of the article in which the services of this class of objectors to the guardians were commem- orated, will Mr. Morley have the kindness to mention the page in which it occurs?

I found in Mr. Morley's article some very useful suggestions for workhouse reform, which he said that no one without brass and triple oak on his breast would dare to advocate. I did not find any reference to the fact that these measures had been advocated with much energy by a considerable body of persons. I com- plained of that omission. If in this case also I have slandered him, will he take the same simple method of exposing me ?

It may be useful to me personally to be told of the inscrutable processes in my mind, and that Mr. Morley has never understood anything I have written. But I cannot suppose that that infor- mation much concerns the reform of workhouses, or can have any special interest for your readers.—Your obedient servant,