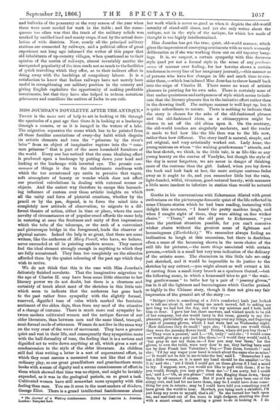 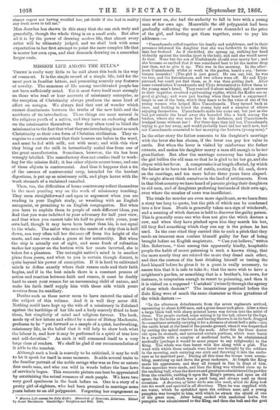 Page 17, 22 September 1866 — MISS JOURDAN'S NOVELETTE AFTER THE ANTIQUE.* THERE is the same
Close

MISS JOURDAN'S NOVELETTE AFTER THE ANTIQUE.* THERE is the same

sort of help to art in looking at life through the spectacles of a past age that there is in looking at a landscape through a camera, or as it is imaged in the waters of a lake. The migration separates the scene which has to be painted from all those familiar associations of every-day habit which disguise its artistic elements and turn the " primrose by the river's brim" from an object of imaginative rapture into the " com- mon primrose " that is part of the mere household furniture of the world. Every one has noticed that the same idealizing effect is produced upon a landscape by putting down your head and looking at the landscape with inverted eye. The prosaic com- monness of things is due to the unfortunate readiness with which the too accustomed eye omits to perceive that vague, soft atmosphere of beauty or wonder which does not affect our practical calculations in dealing with external scenes or objects. And the easiest way therefore to escape this benumb- ing influence of custom over those artistic insights on which all the unity and form of pictorial creations, whether by the pencil or by the pen, depend, is to force the mind into a completely new attitude of observation, to migrate to a dif- ferent theatre of action, either in time or place, where the mere novelty of circumstances or of popular creed affords the same help in restoring at once the freshness and unity of first impressions which the tube of the telescope, or the arch of a convenient and picturesque bridge in the foreground, lends the observer of physical nature. Indeed the help is so great, that there are some writers, like the authoress of Mary Powell, who have, we believe, never succeeded at all in painting modern scenes. They cannot feel the ideal element strongly enough in anything to which they are fully accustomed. They lean too completely on the stimulus afforded them by the quaint colouring of the past age which they wish to revive.

We do not think that this is the case with Miss Jourdan's delicately finished novelette. That the imaginative migration to the age of Charles II. may have been some little stimulus to her literary power we do not doubt, but there is a clearness and certainty of touch about most of the sketches in this little tale which seem to indicate that the authoress has gone back to the past rather from sympathy with the slightly formal, reserved, dignified tone of calm which marked the feminine sentiment of the olden days, than from any need of the stimulus of a change of costume. There is much more real sympathy be- tween modern cultivated women and the antique flavour of our older literature, than between men and the same bland, tranquil, semi-formal mode of utterance. Women do not live in the same way on the very crest of the wave of movement. They have a greater quiet and rest in their life, and consequently they sympathize more with the half-formality of tone, the feeling that it is a serious and dignified act to write down anything at all, which gives a sort of condescension to the style of the older literature. As children still feel that writing a letter is a sort of supernatural effort, in which they must assume a measured tone not like that of their ordinary play, so our great grandfathers and grandmothers wrote books with a sense of dignity and a serene consciousness of effort in them which showed that time was no object, and might be lavishly expended, as it was in the geological periods, on so great a task. Cultivated women have still somewhat more sympathy with this feeling than men. You see it even in the most modern of thinkers, George Eliot. There is a grand intellectual fastidiousness about • The Journal of a Waiting Gentlewoman. Edited by Beatrice A. Jourdan. London : Samisen Low.

her work which is never so good as when it depicts the old-world serenity of stand-still times, and yet she only writes about the antique, not in the style of the antique, for which her mode of thought is too highly intellectualized.

Miss Jourdan has got the true, quiet, old-world manner, which gives the impression of conveying sentiments with as much womanly deliberation as if she was working them out on old tapestry hang- ings. It is, we suspect, a certain sympathy with this decorous style (and yet not a formal style in the sense of any predomi- nance of manner over feeling, for her heroine shows a certain tenderness in every line of her imaginary journal),—this manner as of persons who have few changes in life and much time to con- sider them, —which has induced Miss Jourdan to throw herself back into the reign of Charles II. There seems no want of artistic pleasure in painting for its own sake. There is certainly none of that undue quaintness and antiqueness of style which seems to indi- cate that the literary pleasure lies in the imitative effort rather than in the drawing itself. The antique manner is well kept up, but it is quite subordinate to nature. There is nothing to indicate that the story is chosen for the sake of the old-fashioned phrases and the old-fashioned ideas, as a chimneypiece might be• chosen to set off the old china upon it. On the contrary, the old-world touches are singularly moderate, and the reader is made to feel how like-the life then was to the life now, rather than how different. The story itself is natural, simple, and yet original, and very artistically worked out. Lady Anne, the• young mistress on whom " the waiting gentlewoman " attends, and the best sketch, we think, in the little tale, is as life-like as any young beauty on the canvas of Vandyke, but though the style of the day is never forgotten, we are never in danger of thinking more of the costume than the girl. Indeed, when you lay down the book and look back at her, the mere antique costume fades away as it ought to do, and you remember little but the vain, light-headed, wilful, vivacious, good-natured beauty, with manners a little more insolent to inferiors in station than would be natural now.

Goethe in his conversations with Eckermann dilated with great enthusiasm on the picturesque domestic quiet of the life reflected in some Chinese stories which he had been reading, instancing with delight this sentence, " I heard the pretty maidens laugh, and when I caught sight of them, they were sitting on fine wicker chairs." " There," said the old poet to E ckerma,nn, " you

have the prettiest situation possible, for you can't conceive wicker chairs without the greatest sense of lightness and becomingness (Zierlichkeit)." We remember always feeling an inclination to laugh at this encomium, but there is doubtless often a sense of the becoming shown in the mere choice of the still life for pictures, —the mere things associated with certain. persons,—which is a small but very true indication of the delicacy of the artistic sense. The characters in this little tale are only just sketched, and it would be impossible to do justice to the sketches by any extract,—you might almost as well extract a bit, of carving from a small ivory brooch as a specimen thereof,—but. the following scene, in which a housemaid tries to get " the wait- ing gentlewoman " to bribe her by a pair of " jessemy gloves," has in it all the lightness and becomingness which Goethe praised so highly in the Chinese story, though it does not give any fair impression of the general art of the story :— " Bridget (who is something of a Job's comforter) bath just looked in to tell me about it and seeing me much moved, fell to asking me how long we had had the dog, and why my mistress and I both held him so dear. I gave her but short answers, and wished much to be rid of her company, but she would tarry in the room, greatly to my dis- pleasure, particularly as she began turning over my things, and fingering a pair of jessemy gloves, which I had worn last on Wednesday night. ' How delicious they do smell ! ' says she; I declare one would think they were the jessemy flower itself. Prithee, where did you buy them?' —' They were a present,' said L—' Oh, truly I' said she ; I would some one would give me a pair just like them.'—' I would they would,' said I, ' but pray do not try them on—I fear you may tear them,' for the gloves, to own the truth, were very dear to me, they having been sent me by dear Frank last Valentine's Day.—' Tear them, forsooth ! ' said she ; I'd lay any wager your hand is much about the same size as mine.'

It would not be fair in me to take the bet,' said L ' Remember I am but a little woman, so it is meet my hand should be the smaller.'—' So it is,' said she; ' yet I think I could get on these gloves if I had a mind to try. I suppose, now, you would not like to part with them ; if so be you would, though, you may give them me.'—' I am sorry, but I could not,' said I.—' Oh, as you please !' cried she, flinging them down, keep them, by all manner of means. But if you'd not have been one of the stingy sort, and had let me have them, may be I could have done some- thing for you in return ; may be I could have told you something you'd. have given the world to hear. Howbeit, you being such a skinflint, I'll just keep my news to myself, that's all.' So she turned her back upon me, and marched out of the room in high dudgeon, abutting the door with a smart sound, and making a great to-do in locking it. I do almost regret not having recalled her, yet doubt if she had in reality any fresh news to tell me."

Miss Jourdan has shown in this story that she can etch truly and gracefully, though the whole thing is on a small scale. But after all it is by the power of drawing modern life, that almost every artist will be ultimately judged, and we shall look with some expectation to her first attempt to paint the more complex life that is nearer her own eyes, and that demands drawing on a somewhat