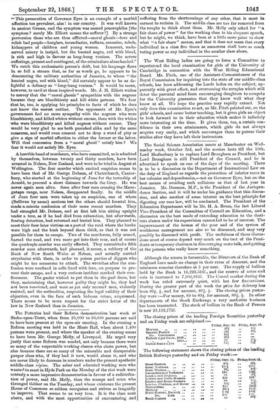 certain Mr. J. H. Elliott, whose letter Mr. Carlyle has thought valuable enough to send to the press. This eloquent and impulsive person begins in the following lofty (if not wholly articulate) strain :— (' This persecution of Governor Eyre is an example of a morbid affection too prevalent; alas ! in our country. It was well known in ancient Greece, and the symptom was named ponerophilos [the symptom? surely Mr. Elliott means the sufferer ?] By a strange perversion those who are thus afflicted—moral ghouls—love and relish bad people—burglars, incendiaries, ruffians, assassins, rebels, kidnappers of children and young women. Innocent, unde- served misery is insipid, but the hunted negro, red with blood, is rich and high in flavour as long-hung venison. The severe sufferings, present and contingent, of the criminalare alone heeded." We catch this enthusiastic person's drift, but his language flows in so full a stream that, as far as words go, be appears to be denouncing the military authorities of Jamaica, to whom " the hunted negro, red with blood," did certainly appear to be as de- lightful• a delicacy as " long-hung venison." It would be mean, however, to cavil at these inspired words. Mr. J. H. Elliott wishes to convey that the "moral ghouls" sympathize with the negroes because they are bloodthirsty and kill white persons. We fear that he, too, is applying his principles to facts of which he does not know the merest outline. The opponents of Mr. Eyre's -government feel no more sympathy with the negroes who were bloodthirsty, and killed whites without excuse, than with the whites -who were bloodthirsty and killed negroes without excuse. They would be very glad to see both. punished alike and by the same measures, and would even consent not to drop a word of pity or give a sign of morbid affection to either the former or the latter. Will that concession from a " moral ghoul " satisfy him ? We fear it would not satisfy Mi. Eyre.