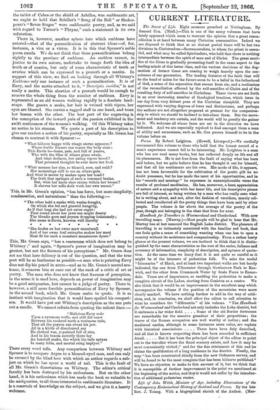 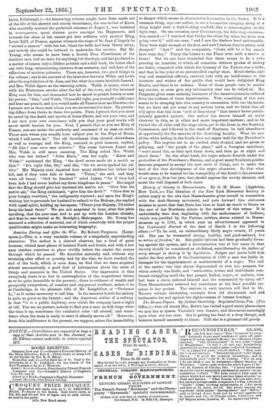 Page 22, 22 September 1866 — laren, Edinburgh.)—An.interesting volume might have been made out of the
Close

laren, Edinburgh.)—An.interesting volume might have been made out of the

life of the.shrewd and sturdy Scotchman, the son-in-law of Knox, who manfully resisted the prelatical schemes of James I., was banished in consequence, spent sixteen years amongst the Huguenots, and towards the close -el his career got into collision with another King,

Louis:XIII. of .France, against whereat.the siege of St. Jean d'Angely he "served a cannon" with his hat, when-the ladle had been blown away, and nobody else could be induced to undertake the service. But Mr. Young, -who seems to have been a -Scotch Free Churchman of the straitest sect, had no taste for anything but theology, and has produced as a matter of course only a lifeless portrait and a dull book, the latter eked out withiong, uninteresting.extracts from sermons, and redolent of the effluvium of modern polemics. There are, however, two good things in the volume; one is the account of the interview between Welsh and Louis after the capitulation of St. Jean, and the other is a scene in which James L and Mrs. Welsh-figure as the amusing actors. Welsh. it seems, went on with his Protestant service after the fall of the town, and the incensed King sent for him, and demanded how he dared to preach heresy so near his person. "Sire," said Welsh, "if you did right, you yourself would come and hear me preach, and you wotddmake all France hear me likewise; for I preach not as those men whom you are accustomed to hear. My preach- ing differs from theirs in these two points. First, I preach that you must bo saved by the-death and merits of Jesus Christ, and not your own, and I am sure your own conscience tells you that your good works will never merit heaven for you. Next, I preach that as yon are King of France, you are under the authority and command of no man on earth. Those men whom you usually hear subject you to the Pope of Rome, whichI will never do." The old Scotehman thus showed shrewdness as well as courage, and the King, restored to good humour, replied, " bien I vans serez mon ministre." The scene between James and Mrs. Welsh is still more amusing. The King asked Mrs. Welsh who was her father? "John Knox," was her reply. "Knox and Welsh !" exclaimed the King, " the ,devil never made sic a match as that !" "It's right like, Sir," said she, "for we never speired his ad- vice." -His Majesty next inquired -how many children her father had left, and if they were lads or lasses. "Three," she said, and they were all lasses. "God be thanked !" cried James, " for if they had been lads I had never bulked my threelingdoms in peace." Shourged that-the King should give her husband his native air. "Give him his native ,air," _the King exclaimed, "live him the devil !" "-Give that to your hungry courtiers," she indignantly rejoined ; and upon the King's wishing her topersuade her husband to submit to the Bishops, shareplied with equal epirit,Jaelding up herapron, ",Please your Majeaty, I'd rather keep.histead there." 'We ..are not .surprised to hear, after-this-plain speaking, that.the poor.man -had to put up with the Loudon and-that he eves buried at St. "Botelph's, iBishopsgate. Mr. Young has amassed a collection of material, out of which somebody with the proper qualification might make. an interestingbiegraphy.