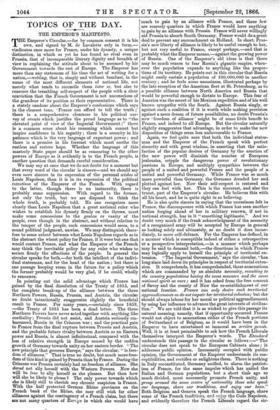 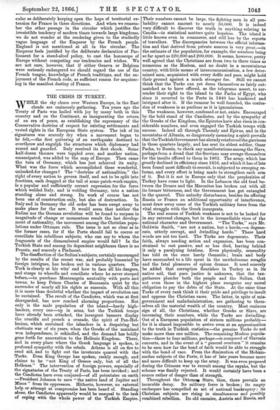 rPEmperor's Circular,—for by common consent it is his own, and signed by M. de Lavalette only in form,— vindicates once more for France, under his dynasty, a unique distinction, in which as yet he has found no rival even in Prussia, that of incomparable literary dignity and breadth of view in explaining the attitude about to be assumed by his Government towards the rest of Europe. The Emperor has more than any statesman of his time the art of writing for a nation,—writing, that is, simply and without bombast, in the name of the most different elements of national life, not merely what tends to reconcile them inter se, but also to reassure the trembling self-respect of the people with a clear conviction that the French Government is not unconscious of the grandeur of its position as their representative. There is a stately candour about the Emperor's confessions which says in the clearest tone, France can afford to tell the truth ;' there is a comprehensive clearness in his political sur- vey of events which justifies the proud language as to "the elevated point of view of the Imperial Government ;" there is a common sense about his reasoning which cannot but inspire confidence in his sagacity ; there is a serenity in his patience which is the very language of expectant power ; and there is a promise in his forecast which must soothe the restless and restore hope. Whether the language of this masterly State paper should be as reassuring to the other powers of Europe as it evidently is to the French people, is another question that demands careful consideration.

We may say at once that we do not doubt for a moment but that every word of the circular is sincere—and we should say even more sincere in its expression of the personal wishes of Louis Napoleon, than it is in its expression of the political intentions of the Emperor of the French. With regard to the latter, though there is no insincerity, there is probably some suppression. With regard to the former, not only the truth, but we are disposed to think the whole truth, is probably told. No one recognizes more clearly than Louis Napoleon that a great national ruler who wishes to establish his dynasty firmly on the throne, must make some concessions to the genius or vanity of the people, even though in the abstract, and without relation to the temper of the people, such concessions would seem, to a sound political judgment, unwise. We may distinguish there- fore to some extent between what Louis Napoleon regards as in the abstract the wisest policy for France, if it were but one that would content France, and what the Emperor of the French may think the inevitable policy for any ruler who wishes to secure firmly the affections of the people. In general the circular speaks for both,—for both the intellect of the indivi- dual statesman, and for the head of the nation ; but there is one passage keeping room in the future for a policy which the former probably would be very glad, if he could, wholly to renounce.

In pointing out the solid advantage which France has gained by the final dissolution of the Treaty of 1815, and the complete break-up of the alliance between the three Northern Powers, Russia, Prussia, and Austria, the circular no doubt intentionally exaggerates slightly the beneficial result to France. For many years,—certainly since 1859, —the Treaty of 1815 has been a dead letter. The three Northern Powers have never acted together with anything like cordiality ; Prussia did not assist, and Austria seriously em- barrassed, Russia in the Crimean war ; and the practical gain to France from the final rupture between Prussia and Austria, and the probable future rivalry between Austria as an Eastern power and Russia, is almost infinitesimal, compared with the loss of relative strength in Europe caused by the sudden growth of Germany towards unity on her eastern border. " The new principle that governs Europe," says the circular, "is free- dom of alliances." That is true no doubt, but much more free- dom of this kind is gained by Prussia than byFrance. During the Crimean war Prussia certainly had no freedom of alliance. She dared ed not ally herself with the Western Powers. Now she be free to ally herself as she pleases. But then how will she be likely to please V The only power towards which i she is likely still to cherish any chronic suspicion is France. With the half protected German Rhine provinces on the French bank of the Rhine, she may still wish for other alliances against the contingency of a French claim, but there are not many quarters of Eurcpe in which she would have much to gain by an alliance with France, and these few are scarcely quarters in which France would have anything to gain by an alliance with Prussia. France will never willingly aid Prussia to absorb South Germany. France would do a great deal to prevent any encroachment on Holland. In short, Prus- sia's new liberty of alliance is likely to be useful enough to her, but not very useful to France, except perhaps,—and that is probably what the Emperor means,—against the growing power of Russia. One of the Emperor's old ideas is that there may be much reason to fear Russia's gigantic empire, when- ever the population expands to anything like the propor- tions of its territory. He points out in this circular that Ruasia, might easily sustain a population of 100,000,000 in another century ; and he feels some uneasiness, illustrated perhaps by the late reception of the American fleet at St. Petersburg, as to. a possible alliance between North America and Russia that would be powerful enough to dictate to Europe. This fear of America was the secret of his Mexican expedition and of his well known sympathy with the South. Against Russia singly, or against such a coalition if it is worth while making provision against a mere dream of future possibilities, no doubt Prussia's new 'freedom of alliance' might be of some little benefit to, France, and indeed to all Europe. But the circular naturally slightly exaggerates that advantage, in order to make the new disposition of things seem less unfavourable to France.

Again, we feel quite sure that both the individual states- man and the Emperor of the French speak with perfect sincerity and with great wisdom, in asserting that the satis- faction of the popular desires of Germany by the erection of the new power will diminish the number of European jealousies, cripple the dangerous power of revolutionary passions in Europe, and multiply sympathies between the people of a united and powerful France and the people of a. united and powerful Germany. While France was so muck more powerful than Germany, the Germans dreaded her an& plotted against her. Now their self-respect is restored and they can feel with her. This is the sincerest, and also the truest, part of the Emperor's circular. He believes this with all his heart, and he is quite right in so believing.

He is also quite sincere in saying that the uneasiness felt in France, the discomposure with which France has seen another nation forging ahead of her in military renown, if not in national strength, has in it " something legitimate." And we doubt very much if the frank acknowledgment of the necessity of a reorganized army will be accepted by Europe in general as looking solely and ultimately, as no doubt it does imme- diately, to mere self-defence. For the Emperor has defined, in a manner which is susceptible indeed of either a retrospective or a prospective interpretation,—in a manner which perhaps. may be said to demand both,—the directions in which France- may logically apply to herself the principle of territorial ex- tension. "The Imperial Government," says the circular, "has. long since laid down its principles in respect of territorial exten- sion. It comprehends, it has comprehended, those annexations. which are commanded by an absolute necessity, reuniting to the country populations having the same manners and the same- national spirit as ours ; and it has asked from the free consent. of Savoy and the county of Nice the re-establishment of our national frontier. France can only desire such territorial aggrandizements as di, not impair her territorial cohesion; but she should always labour for her moral or political aggrandizement. by using her influence to advance the great interests of civiliza- tion." We are told that it is as wicked to give this passage its natural meaning, namely, that if opportunity occurred France would not object to annexations either of the French portions. of Switzerland or of Belgium, as it would have been in the Emperor to have entertained so immoral an arrare pense'e. Well, it is at least permissible to ask how the French Liberals themselves interpret the Emperor's words. The Etendard understands this passage in the circular as follows :—" The circular does not speak to the European Cabinets alone ; it addresses public opinion. Incessantly occupied with public opinion, the Government of the Emperor understands its sus- ceptibilities, and rectifies or enlightens them. There is nothing in Italy reconstituted, Germany unified, to alarm the patriot- ism of France, for the same impulse which has united the Italian and German populations, but a short time ago so much divided, must necessarily promote French unity, and group around the same centre of nationality those who speak our language, share our traditions, and enjoy our laws." Both Belgium and Geneva speak the French language, share some of the French traditions, and enjoy the Code Napoleon, and evidently therefore the French Liberals regard the cir-

cular as deliberately keeping open the hope of territorial ex- tension for France in these directions. And when we remem- ber the other passage in the circular which justifies the irresistible tendency of modern times towards large kingdoms, we do not wonder at the rendering given to the studiedly vague language of the Emperor by the French people. England is not mentioned at all in the circular. The Emperor feels justified by the deliberate declaration of Par- liament for a stand-aloof policy, to cast the horoscope of Europe without computing our tendencies and wishes. We are not sure, however, that if either Geneva or Belgium were seriously endangered we should regard the use of the French tongue, knowledge of French traditions, and the en- joyment of the French code, as sufficient reason for acquiesc- ing in the manifest destiny of France.