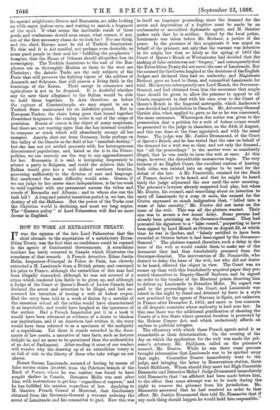 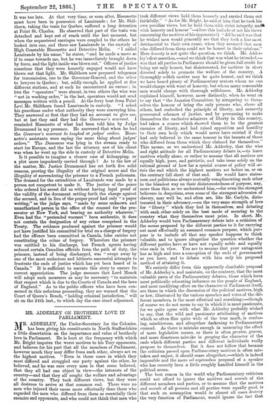 HOW TO "WORE AN EXTRADITION TREATY. ,

IT was the -opinion of the date Lord Palmerston that -the chief obstacle to the negotiation of a satisfactory Extra- dition Treaty, was the fact that no confidence could be reposed in the agents of Continental Governments. A scandalous incident has lately occurred in Canada which illustrates the soundness of that -remark. A French detective, Edme Justin Melin, Jnspecteur-Principal de Police de:Paris, has cleverly extracted a M. Lamirande from a British prison, and conveyed his prize to France, although the extradition of this man had been illegally demanded, although he was not accused of a crime which rendered him liable to be given up, and although a Judge of the Court of Queen's Bench of Lower Canada had declared the arrest and detention to be illegal, and had an- nounced his intention of issuing a writ of habeas corpus. Had the story been told in a work of fiction by a novelist of the sensation school all the critics would have characterized it as improbable, and would have laughed at the ignorance of the author. Had a French Imperialist put it in a book it would have been advanced as evidence of a desire to blacken our institutions, and if an American had written it, the story would have been referred to as a specimen of the malignity of .a republican. Yet there it stands recorded in the docu- ments of law courts, a narrative of bare facts, such as lawyers delight in, and no more to be questioned than the authenticity of an Act of Parliament. After reading it none of our readers will wonder why the drawing up of an extradition treaty is so full of risk to the liberty of those who take refuge on our shores.

Ernest Bureau Lamirande, accused of having by means of false entries stolen 30,0001. from the Poictiers branch of the Bank of France, where he was cashier, was found to have sought shelter in Canada, Detective Melin was sent after him, with instructions to get him "regardless of expense," and he has fulfilled his mission regardless of law. Applying to M. Gautier, French Consul at Montreal, that functionary obtained from the Governor-General a warrant ordering the arrest of Lamirande and his committal to gaol. Now this was

in itself an improper proceeding, since the demand for- the arrest and deportation of a fugitive must be made- by an ambassador or accredited diplomatic agent, and M. Gautier- makes oath that he is neither. -Seized by the local' police, Lamirande was taken before Mr. Brehaut, a justice of the peace. In the presence of this magistrate it was urged on behalf of the prisoner, not only that the warrant was defective in its origin, but that so lately as the spring of 1865 the Court of Queen's Bench at Westminster had decided that the making of false entrieswas not "forgery," and consequently that, the Extradition Treaty did not cover the case of Lamirande. But the counsel for the Crown laughed at the decisions of the English. Judges and declared they had no authority, and Magistrate. Brehaut gave no heed to them, and committed Lamirande for trial. His lawyers subsequently saw Lord Monck, the Governor- General, and had obtained from him the assurance that ample- time should be given to allow the prisoner to appeal to all Courts competent to deal with his case, even to the Court of Queen's Bench in the Imperial metropolis, which Anderson's- case deoidedhad jurisdiction in Canada. Mr. Attorney-General Cartier also, when applied to, gave, so far as he was concerned,. the same assurance. Whereupon due notice was given to the- prosecution that a petition for a writ of habeas corpus would be presented to the judge in chambers, on the 24th of August, and this was done at the time appointed, and with the usual' forms. The judge was Mr. Justice Drummond, of the Court of Queen's Bench, and he has stated that the case on behalf of the demand for a writ was so clear, and not only the demand,. but "all the proceedings " in the matter were so manifestly illegal, that he was ready to issue the writ .at once. At this stage, however, the discreditable manceuvres begin. The very- fairness of an English Court, the excellent custom of healing both sides, was twisted into an engine to be used for the defeat of the law. A Mr. Pominville, retained for the Bank_ of France, desired to be heard, and that he might be heard_ fairlythe judge adjourned the case until the next morning. The 'prisoner's lawyers already-suspected foul play, but ,whea Mr. Doutre, his counsel, said something about an intention to- carry off.Lamirande -by a coup de main, the -counsel for the Crown expressed so much •indignation :that, ".lulled into a. seam of false security," Mr. Doutre ,did not insist on the issue of the writ. This •was all the platters.wanted. .Their- raini was -to secure a few lours' delay. Some persons :had 'already been practising on the,Govarnor-General. They had procured his signature to ..a "false record," purporting to have- been signed by Lord Monck at Ottawa on August28, at which- time he was in Quebec, and "falsely certified to have been recorded at Ottawa before it had been-signed by the Governor-- General." The plotters wanted, therefore, such a delay in the issue of the writ as would enable them to make use of the document they had thus fraudulently procured from the Governor-General. The intervention of Mr. Pominville, who- desired to delay the issue of the writ, but who did not desire to be heard, effected the object in view. The Court was no- sooner up than with this fraudulently acquired paper they pre- sented themselves to Deputy-Sheriff Sanborn, and he signed an order to the turnkey of the Montreal prison directing him to deliver up Lamirande to Detective Melin. No regard was- paid to the proceedings in the Court, and Lamirande was- seized in the night by fraud and detained by force in a style now practised by the agents of Narvaez in Spain, not unknown in France after December 2, 1851, and more or less common in all despotic countries where authority is lord over law. In this case there was the additional gratification of cheating the• Courts of a free State where personal freedom is protected by the Habeas Corpus Act, and which audaciously affords an asylum to political refugees.

The effrontery with which these French agents acted is as- remarkable as their determination. On the evening of the day on which the application for the writ was made the pri- soner's attorney, Mr. Shilthorn, called on the prisoner's: counsel, Mr. Doutre. While he was there some persona brought information that Lamirande was to be spirited away that night. Counsellor Doutre immediately went to the judge, and bringing the latter to Bonaventura station, there' found Shilthorn. Whom should they meet but High Constable Bissonette and Detective Melin? Judge Drummond immediately told Bissonette that "an affidavit had been made before him, to the effect that some attempt was to be made during the night to remove the prisoner from his jurisdiction. Mr.. Bissonette answered that he had received no order to that effect. Mr. Justice Drummond then told Mr. Bissonette that if any such thing should happen he would hold him responsible."

It was -too late. At that very time, or soon after, Bissonette must have been in possession of Lamirande ' • for Mr. Shil- thorn, taking the train for Quebec, suffered a long detention at Point St. Charles. He observed that part of the train was detached and kept out of reach until the last moment, but when the sequestered carriages were coupled to the others he looked into one, and there saw Lamirande in the custody of High Constable Bissonette and Detective Melin. " I called Lamirande by his name," he states, "and he made a move as if to come towards me, but he was immediately brought down by force, and the light inside was blown out." Officers of justice conscious that they were honestly engaged would not have blown out that light. Mr. Shilthorn now prepared telegrams for transmission, one to the Governor-General, and the other to lawyers in Quebec ; but, oddly enough, he applied at five different stations, and at each he encountered an excuse ; in two the " operators " were absent, in two others the wire was " not in working order," in the last, operators would not send messages written with a pencil. At the ferry boat from Point Levi Mr. Shilthorn found Lamirande in custody. "I asked his guardians under what authority they were conveying him. They answered at first that they had no account to give me, but at last they said they had the Governor's warrant. I reminded Bissonette of what had been told him by Judge Drummond in my presence. He answered that when he had the Governor's warrant he laughed at judges' orders. Bisso- nette's assistants were saying the same thing about judges' orders." The Damascus was lying in the stream ready to start for Europe, and the last the attorney saw of his client was when he went up the side in custody of Detective Melin.

'Is it possible to imagine a clearer case of kidnapping, or a plot more impudently carried through ? As to the law of the matter, Mr. Justice Drummond has set forth five solid reasons, proving the illegality of the original arrest and the illegality of surrendering the prisoner to a French policeman. The demand for the extradition of Lamirande was made by a person not competent to make it. The justice of the peace who ordered his arrest did so without having legal proof of the validity of the document setting forth the charge against the accused, and in lieu of the proper proof had only " a paper writing," as the judge says, "made •by some unknown and unauthorized person in the office of the counsel for the pro- secutor at New York, and bearing no authority whatever." Even had 'the " pretended warrant " been authentic, it does not contain the designation of any crime comprised in the Treaty. The evidence produced against the prisoner would not 'have justified his committal for trial on a charge of forgery had the offence been committed in Canada, false entries not constituting the crime of forgery. Wherefore the prisoner was entitled to his discharge, but French agents having seduced certain Canadian officials from the path of duty, the prisoner, instead of being discharged, was " swept away by one of the most audacious and hitherto successful attempts to frustrate the ends of justice which has yet been heard of in Canada." It is sufficient to narrate this story to ensure its correct appreciation. The judge assumes that Lord Monck will adopt such measures as may be necessary "to maintain that respect which is due to the Courts of Canada and the laws of England." As to the public officers who have been con- cerned in this nefarious proceeding, they are warned that the Court of Queen's Bench, " holding criminal jurisdiction," will sit on the 24th inst., to which day the case stood adjourned.