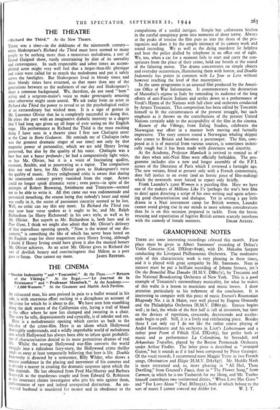 THERE are some interesting recordings released this month. First place must be given to Albert Sammons' recording of Delius's Violin Concerto (Col. DX8197-8199), with Dr. Malcolm Sargent conducting the Liverpool Philharmonic Orchestra. The meditative style of this characteristic work is very pleasing in these times, and it is played with great sympathy by Mr. Sammons. Next in interest must be put a brilliant recording of Johann Strauss, jnr.'s On the Beautiful Blue Danube (H.M.V. DB6r71), by Toscanini and the National Broadcasting Orchestra of New York. This is a good example of Toscanini's extraordinary musicality, for what he makes of this waltz is a lesson to musicians and music lovers. I draw attention particularly to his treatment of the conclusion. It is interesting to compare with this piece of music Enesco's Roumanian Rhapsody No. it in A Major, very well played by Eugene Ormandy and the Philadelphia Orchestra (H.M.V. DB613o). Enesco begins well • in fact, the whole of the first half is full of invention, but later on the devices of repetition, crescendo, decrescendo and acceler- ando begin to pall. Still, it is a lively and exhilarating piece. Besides these I can only say I do not like the rather coarse playing of Andre Kostelanetz and his orchestra in Liszt's Liebestraum and a rather poor Poem of Fibic-h (Col. DX1163), but prefer both as music and as performance La Colondrina, by Serradell, and Arkanshaw Traveller, played by the Boston Promenade Orchestra under Arthur Fiedler. The latter piece is described as " arranged Guion," but it sounds as if it had been composed by Percy Grainger. Of the vocal records, I recommend most Maggie Teyte in two French songs, Obstination and Elegie (H.M.V. DA1847). Mr. Heddle Nash is more restrained and, so, more pleasing in " All Hail, Thou Dwelling," from Gounod's Faust, than in "The Flower Song," from Carmen, in which he is too Tauberish for my liking, ancl*Mr. Tauber himself contributes two sentimental ditties, " When Love Has Gone" and " For Love 'Alone " (Parl. RO2o531), both of which belong to the

sort of music I cannot conceal my dislike for. W. J. T.