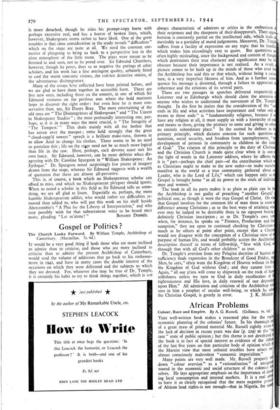 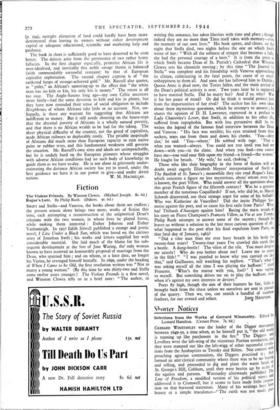 Tms well-written book makes a reasoned plea for the rep economic planning of the colonies' future. In his thorough of a great mass of printed material Mr. Russell rightly notes the lack of decision in recent years was due (p. 229) to the " tant " state of public opinion ; but this theme is not developed, the book is in fact of special interest as evidence of the influ of the last five years on that particular body of opinion which the Marxist view that most colonial troubles have arisen out almost consciously malevolent "economic imperialism." Many points are very well made. Mr. Russell properly down "colour aversion" as a "rationalisation" of anta rooted in the economic and social structure of the colonies selves. He lays appropriate emphasis on the importance of de ing local consumption and internal markets. It is a real a to have it so clearly recognised that the mere negative pro! of African land rights-is not enough—that in Nigeria, for

(p. 294), outright alienation of land could hardly have been more detrimental than leaving its owners• without either development capital or adequate educational, scientific and marketing help and guidance.

The book in short is sufficiently good to have deserved to be even better. The defects arise from the persistence of two rather hoary fallacies. In the first chapter especially, primitive African life is over-idealised, and inevitably this noble savage theme is balanced (with commendably sorrowful restraint) by that . of European capitalist exploitation. The second chapter .caption is of " the cankered heaps of strange-achieved gold." Mr. Russell also quotes, as " pithy," an African's summing-up to the effect that " the white man has no kith or kin, his only kin is money." The retort is all too easy. The Anglo-Saxons long ago—my own Celtic ancestors more lately—had the same devotion to kith and kin in plenty, but they have now extended their sense of social obligation to include Neighbours of whom Africans take little or no account. Nor, un- happily, is there any warrant for suggesting that Africans are indifferent to money. But it still needs shouting on the house-tops that the abysmal poverty of Africans is a wholly natural poverty, and that there is no African wealth to be had for the taking. The sheer physical difficulty of the country, not the greed of capitalists, made African railways so deplorably costly. The pitiable ineptitude of Africans did much more than European rapacity to ruin native palm or rubber trees, and this fundamental weakness still governs the situation. Mr. Russell's own aims and ideals are unimpeachable, but he is unduly hard on the European pioneers whose struggles with adverse African conditions had no such body of knowledge to guide them as we have to-day. He is not alone in grievously under- estimating the distance African society has yet to travel, under the best guidance we have it in our power to give—and under direct