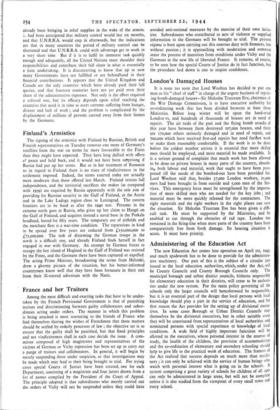 France and her Traitors

Among the most difficult and exacting tasks that have to be under- taken by the French Provisional Government is that of punishing traitors and discriminating between guilty collaborators and subor- dinates acting under orders. The manner in which this problem is being attacked is most reassuring to the friends of France who find themselves sharing the wishes of Frenchmen that these matters should be settled by orderly processes of law ; the objective set is to ensure that the guilty shall be punished, but that fixed principles and not vindictiveness shall in each case decide the issue. A com- mittee composed of high magistrates and representatives of the victims of German or Vichy repression has been set up to carry out a purge of traitors and collaborators. In general, it will begin by merely suspending those under suspicion, so that investigations may be made which may lead to their being brought to trial. For trying cases special Courts of Justice have been created, one for each Department, consisting of a magistrate and four jurors drawn from a list of names compiled by the President of the Court of Appeal. The principle adopted is that subordinates who merely carried out the orders of Vichy will not be suspended unless they could have avoided anti-national measures by the exercise of their own initia- tive. Subordinates who contributed to acts of violence or supplied information to the Germans will be brought to trial. The present regime is bent upon carrying out this onerous duty with firmness, but without passion ; it is approaching with moderation and common sense the process of transition from conditions under Vichy and the Germans to the new life of liberated France. It remains, of course, to be seen how the special Courts of Justice do in fact function, but the procedure laid down is one to inspire confidence.