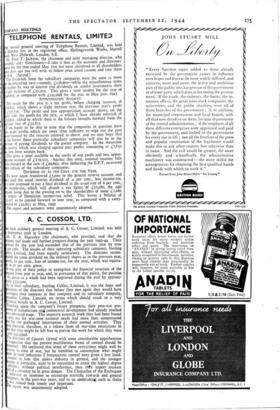 E annual general meeting of Telephone Rentals, Limited, was held Monday last at the registered office, Hollingsworth Works, Martell Gad, West Dulwich, London, S.E. Mr. Fred T. Jackson, the Chairman and joint managing director, who aided, said: Gentlemen —I take it that as-the accounts and directors' con for the year ended May 31st last were circulated to all shareholders ,ne days ago you will wish to follow your usual custom and take them read. (Agreed.) The dividends from the subsidiary companies were the same as those the preceding year—namely, £136,600—while the miscellaneous items income by way of interest and dividends on sundry investments show slight increase of £10,205. This gives a total income for the year of 146,805, as compared with £145,698 for the year to May 31st, 1943.

APPROPRIATION ACCOUNT. The result for the year is a net profit, before charging taxation, of 138.851, which shows a slight increase over the previous year's profit £137,756. The profit and loss appropriation account shows, on the edit side, the profit for the year, Lo which I have already referred, of 138,851, added to which there is the balance brought forward from the evious year of £32,811. I am happy to be able to state that the companies in question have made profits which are more than sufficient to wipe out the past es'covered by the reserves referred to above, and we may hope that the future these particular subsidiary companies will also be in the ration of paying dividends to the parent company. In the meantime reserve which was charged against past profits amounting to £7,650 s now been written back.

This gives a total available to the credit of our profit and loss appro- ation account of £179,312. Against this total, national taxation falls be charged in the sum :If £99,695, after deducting the E.P.T. recovered m certain of the subsidiary companies. DIVIDEND OF TO PER CENT. FOR THE YEAR. We have again transferred £5,000 to the general reserve account and re paid the usual interim dividend of 4 per cent., less income-tax. is now proposed to pay a final dividend at the usual rate of 6 per cent., s income-tax, which will absorb a net figure of £25,080, the odd tint being due to the passing on to the shareholders of some £1,080 respect of Dominion income-tax relief. This leaves a balance of 3.537 to be carried forward to next year, as compared with a carry- .ard of £32,811 at May, 1943 The report and accounts were unanimously adopted.