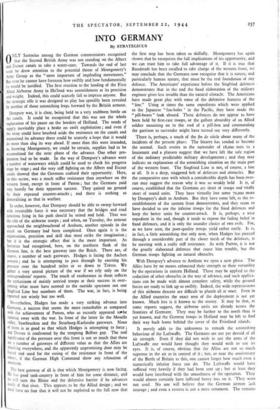 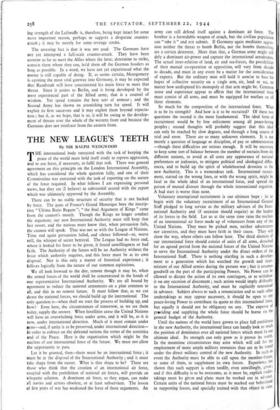 ONLY Sertorius among the German commentators recognised that the Second British Army was not standing on the Albert and Escaut canals to take a water-cure. Towards the end of last week he drew attention to the potential threat of Montgomery's Army Group as the " most important of impending movements." But even he cannot have foreseen how swiftly and how fundamentally be would be justified. The first reaction to the landing of the First Allied Airborne Army in Holland was astonishment at its precision and weight. Indeed, this could scarcely fail to impress anyone. But the strategic role it was designed to play has speedily been revealed by another of those astonishing leap. forward by the British armour.

Dempsey was, it is clear, being held to a very stubborn battle on the canals. It could be recognised that this was not the whole explanation of his pause on the borders of Holland. The needs of supp:y inevitably place a brake on swift exploitation ; and even if the army could have brushed aside the resistance on the canals and maintained its advance there could be scarcely a hope that it would do more than slog its way ahead. If more than this were intended, as, knowing Montgomery, we could be certain, supplies had to be accumulated for the next phase of the advance. One other pre- paration had to be made. In the way of Dempsey's advance were a number of waterways which could be used to check his progress stage by stage ; and the very stiff fighting on the Albert and Escaut canals showed that the Germans realised their opportunity. Here, on this sector, was a much stiffer resistance than anywhere on the western front, except in front of Patton ; but the Germans paid very heavily for their apparent success. They gained no ground by their repeated counter-attacks ; and there is nothing so demoralising as that in warfare.

In order, however, that Dempsey should be able to sweep forward with irresistible force it was necessary that the bridges and road junctions lying in his path shou'ad be seized and held. That was the role of the airborne troops ; and when, on Tuesday, the armour approached the neighbourhood of Arnhem, another episode in the attack on Germany had been completed. Once again it is the organisation, precision and skill that most strike the imagination ; but it is the strategic effect that is the more important. As Sertorius had recognised, here, on the northern flank of the German line, is the best gateway into the Reich. There are, of course, a number of such gateways. Hodges is facing the Aachen postern ; and he is attempting to pass through by exerting his pressure over the hundred miles or so down to Treves. We gather a very unreal picture of the war if we rely only on the correspondents' reports. The touch of exuberance in them reflects the enthusiasm of mainly untried troops at their success in over- coming what must have seemed to the outside spectator not one Siegfried Line but numbers of them. The war, in fact, is being reported not wisely but too well.

Nevertheless, Hodges has made a very striking advance into Germany, a success that seems the more remarkable as compared with the achievement of Patton, who so recently appeared tcPbe running away with the war. In front of the latter lie the Moselle

Saarbrucken and the Strasburg-Karlsruhe gateways. None of them is as good as that which Hodges is attempting to force ; and Devers is confronted by the tempting Belfort gap. The real significance of the pressure over this front is not so much that there are a number of gateways of different value as that the Allies are attacking everywhere, and the apparently unpromising door may be forced and used for the easing of the resistance in front of the others, if the German High Command show any relaxation of attention.

The best gateway of all is that which Montgomery is now facing. He has good tank-country in front of him for some distance, and he will turn the Rhine and the defensive barrier if he advances north of that river. This appears to be the Allied design ; and we need have no fear that it will not be exploited to the full now that

the first step has been taken so skilfully. Montgomery has again shown that he recognises the full implications of his opportunity, and we can trust him to take full advantage of it. If it is true that Rundstedt has been recalled to take charge of the western front, we may conclude that the Germans now recognise that it is nature, and particularly human nature, that must be the real foundation of any defence. The Americans' experience before the Siegfried defences demonstrates that in the end the fixed elaboration of the military engineer gives less trouble than the natural obstacle. The Americans have made great play with some of the defensive features of the " line." Using at times the same expedients which were applied to the Japanese " fox-holes in the Pacific, they have made the " pill-boxes" 'look absurd. These defences do not appear to have been held by first-rate troops, or the gallant absurdity of an Allied soldier mounting on to the roof of a pill-box and commanding the garrison to surrender might have turned out very differently.

There is, perhaps, a touch of the fin de siècle about many of the incidents of the present phasa. The bizarre has tended to become the normal. Such events as the surrender of '8,00o men to a lieutenant and a platoon suggest that we have left the safe region of the ordinary predictable military developments ; and they may indicate an explanation of the astonishing situation on the main part of the western front. The Siegfried Line is not, of course, a line at all. It is a deep, staggered belt of defences and obstacles. But the comparative ease with which a considerable depth has been over- run may suggest the reason why it was so weakly held. It is, of course, established that the Germans are short of troops and vitally short of sound units. They have virtually lost some 70,000 more by Dempsey's dash to Arnhem. But they have some left, as the re- establishment of the eastern front demonstrates, and they seem to have decided to use the inferior troops for the fixed defences and keep the better units for counter-attack. It is, perhaps, a wise expedient in the end, though it tends to expose the fading belief in fixed defences, and it is only the sounder choice of two evils. For, as we have seen, the poor-quality troops yield rather easily. It is, in fact, a little astonishing that only now, when Hodges has pierced through a considerable part of the closer mesh of the defences, is he meeting with a really stiff resistance. As with Patton, it is not the greatly elaborated defences that cause him trouble, but the German troops fighting on natural obstacles.

With Dempsey's advance to Arnhem we open a new phase. The Allies have by no means exhausted their strength or their versatility by the operations in eastern Holland. These may be applied to the reduction of other obstacles in the way of advance, and such applica- tions can be made with almost complete safety, while the ground forces are ready to link up so swiftly. Indeed, the wide repercussions of this airborne descent are difficult to plumb all at once. Even in the Allied countries the exact area of the deployment is not yet known. Much less is it known to the enemy. It may be that, as some reports suggest, the airborne units are already across the frontiers of Germany. They may be farther to the north than is yet known, and the German troops in Holland may be left to find their way back home behind the cover of the Friesland islands.

It merely adds to the unknowns to remark the astonishing behaviour of the Luftwaffe. The Germans are not yet devoid of all air strength. Even if they did not wish to use the arms of the Luftwaffe one would have thought they would wish to use its eyes. It is, of course, obvious that the Allies are not so much supreme in the air as in control of it ; but, so near the anniversary of the Battle of Britain as this, one cannot forget how much even a numerically inferior force can do. The Luftwaffe would have suffered very heavily if they had been sent up ; but at least they would have interfered with the smoothness of the operation. They would almost certainly have inflicted heavy loss on it. They were not used. No one will believe that the German airmen :ack courage ; and even a reserve is not a mere ornament. The remain- ing strength of the Luftwaffe is, therefore, being kept intact for some more important reason, perhaps to support a desperate counter- attack ; it may be merely for some revenge stroke.

The arresting fact is that it was not used. The Germans have not yet attempted a full-scale counter-attack. They have been content so far to meet the Allies where the lattei determine to strike, contain them where they can, hold them off the German borders as long as possible. In a word, we have not yet experienced what the enemy is still capable of doing. If, as seems certain, Montgomery is opening the most vital gateway into Germany, it may be expected that Rundstedt will have concentrated his main force to meet that threat. Since it points to Berlin, and is being developed by the most experienced part of the Allied army, that is a counsel of wisdom. Yet speed remains the best sort of armour ; and the Second Army has shown an astonishing turn for speed. It will exploit its first successes and it may exploit them beyond expecta- tion ; but if, as we hope, that is so, it will be owing to the develop- ment of threats over the whole of the western front and because the Germans dare not reinforce from the eastern•front.