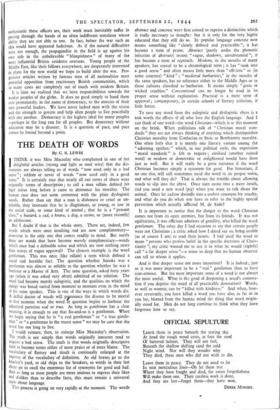 THE DEATH OF WORDS

ITHINK it was Miss Macaulay who complained in one of her delightful articles (strong and light as steel wire) that the dic- tionaries are always telling us of words " now used only in a bad sense" ; seldom or never of words " now used only in a good sense." It is certainly true that nearly all our terms of abuse were originally terms of description ; to call a man villain defined his legal status long before it came to denounce his morality. The human race does not seem contented with the plain dyslogistic words. Rather than say that a man is dishonest or cruel or un- reliable, they insinuate that he is illegitimate, or young, or low in the social scale, or some kind of animal ; that he is a " peasant slave," a bastard, a cad, a knave, a dog, a swine, or (more recently) an adolescent.

But I doubt if that is the whole story. There are, indeed, few words which were once insulting and are now complimentary— democrat is the only one that comes readily to mind. But surely there are words that have become merely complimentary—words which once had a definable sense and which are now nothing more than noises of vague approval? The dearest example is the word gentleman. This was once (like villain) a term which defined a social and heraldic fact. The question whether Snooks was a gentleman was almost as soluble as the question whether he was a barrister or a Master of Arts. The same question, asked forty years ago (when it was asked very often) admitted of no solution. The word had become merely eulogistic, and the qualities on which the eulogy was based varied from moment to moment even in the mind of the same speaker. This is one of the ways in which words die. A skilful doctor of words will prounce the disease to be mortal at that moment when the word m question begins to harbour the adjectival parasites real or true. As long as gentleman has a clear meaning, it is enough to say that So-and-so is a gentleman. When we begin saying that he is " a real gentleman " or " a true gentle- man " or " a gentleman in the truest sense " we may be sure that the word has not long to live.

I would venture, then, to enlarge Miss Macaulay's observation. The truth is not simply that words originally innocent tend to acquire a bad sense. The truth is that words originally. descriptive tend to become terms either of mere praise or of mere blame. The vocabulary-of flattery and insult is continually enlarged at the expense of the vocabulary-of definition. As old horses go to the knacker's yard, or old ships to the breakers, so words in their last decay go to swell the enormous list of synonyms for good and bad. And as long as most people are more anxious to express their likes and dislikes than to describe facts, this must remain a universal truth about language.

This process is going on very rapidly at the moment. The words

abstract and concrete were first coined to express a distinction which is really necessary to thought: but it is only for the very highly educated that they still do so. In popular language concrete now means something like " clearly defined and practicable "; it has become a term of praise. Abstract (partly under the phonetic infection of abstruse) means " vague, shadowy, unsubstantial "; it has become a term of reproach. Modern, in the mouths of many speakers, has ceased to be a chronological term ; it has " sunk into a good sense " and often means little more than " effi.:ient " or (in some contexts) " kind " ; "medieval barbarities," in the mouths of the same speakers, has no reference either. to the Middle Ages or to those cultures classified as. barbarian. It means simply " great or wicked cruelties." Conventional can no longer be used in its proper sense without explanation. Practical is a mere term of approval ; contemporary, in certain schools of literary criticism, if little better.

To save any word from the eulogistic and dyslogistic abyss is a task worth the efforts of all who love the English language. And I can think of one word—the word Christian—which is at this moment on the brink. When politicians talk of "Christian moral stan- dards " they are not always thinking of anything which distinguishes Christian morality from Confucian or Stoic or Benthamite morality. One often feels that it is merely one literary variant among the " adorning epithets " which, in our political style, the expression "moral standards" is felt to require ; civilised (another ruined word) or modern or democratic or enlightened would have done just as well. But it will really be a great nuisance if the word Christian becomes simply a synonym for good. For historians, if no one else, will still sometimes need the word in its proper sense, and what will they do? That is always the trouble about allowing words to slip into the abyss. Once turn swine into a mere insult, and you need a new word (pig) when you want to talk about the animal. Once let sadism dwindle into a useless synonym for cruelty, and what do you do when you have to refer to the highly special perversion which actually afflicted M. de Sade?

It is important to notice that the danger to the word Christian comes not from its open enemies, but from its friends. It was not egalitarians, it was officious admirers of gentility, who killed the word gentleman. The other day I had occasion to say that certain people were not Christians ; a critic asked how I dared say so, being unable (as of course I am) to read their hearts. I had used the word to mean " persons who profess belief in the specific doctrines of Chris- tianity "; my critic wanted me to use it in what he would (rightly) call " a far deeper sense "—a sense so deep that no human observer can tell to whom it applies.

And is that deeper sense not more important? It is indeed ; just as it was more important to be a " real " gentleman than to have coat-armour. But the most important sense of a word is not always the most useful. What is the good of deepening a word's connota- tion if you deprive the word of all practicable denotation? Words, as well as women, can be " killed with kindness." And when, how- ever reverently, you have killed a word you have also, as far as in you lay, blotted from the human mind the thing that word origin- ally stood for. Men do not long continue to think what they have forgotten how to say.