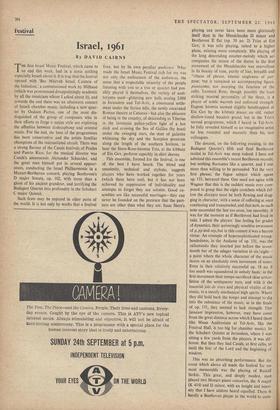 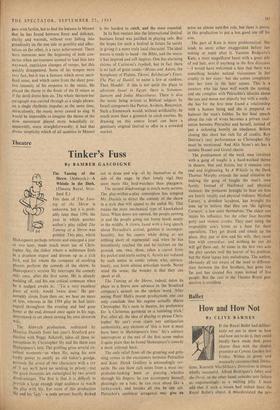 By DAVID CAIRNS rr HE first Israel Music Festival, which came to 1 an end this week, had in a sense nothing especially Israeli about it. It is true thatthe festival opened with `Bar Mitzvah Israel, Cantata of the Initiation,' a commissioned work by Milhaud (which was pronounced disappointingly academic by all the musicians whom I asked about it), and towards the end there was an afternoon concert of Israeli chamber music, including a new quar- tet by Oedoen Partos, one of the most dis- tinguished of the group of composers who in their efforts to forge a native style are exploring the affinities between dodecaphony and oriental music. For the rest, the bent of the programmes has been conservative and the artists familiar champions of the international circuit. There was a strong flavour of the Casals festivals of Prades and Puerto Rico, for the musical director was Casals's amanuensis Alexander Schneider, and the great man himself put in several appear- ances, conducting the Israel Philharmonic in a Mozart-Beethoven concert, playing Beethoven's D major Sonata, op. 102, with more than a ghost of his ancient grandeur, and terrifying the Budapest Quartet into profundity in the Schubert C major Quintet.

Such feats may be enjoyed in other parts of the world. It is not only by works that a festival lives, but by its own peculiar ambience What made the Israel Music Festival rich for me was not only the enthusiasm of the audiences, the sense that a respectable minority of the people listening with you to a trio or quartet had pos- sibly played it themselves, the variety of audi- toriums used—glittering new halls seating 3,000 in Jerusalem and Tel-Aviv, a communal settle- ment under the Syrian hills, the newly excavated Roman theatre at Cmsarea—but also the pleasure of being in the country, of descending to Tiberias in the luminous pollen-yellow light of a hot dusk and crossing the Sea of Galilee (by boat) under the swinging stars, the dust of galaxies whitening the sky and the Scorpion prostrate along the length of the southern horizon, to hear the Stern-Rose-Istomin Trio, at the kibbutz of Ein Gev, perform superbly in shirt sleeves.

This ensemble, formed for the festival, is one of the best I have heard. The blend and unanimity, technical and stylistic, suggests players who have worked together for years (which these have not), but it has not been achieved by suppression of individuality and attempts to forget they are soloists. Good en- sembles are like successful marriages—they can never be founded on the pretence that the part- ners are other than what they are. Isaac Stern's playing can never have been more gloriously itself than in the Mendelssohn D minor and Beethoven E flat (op. 70 no. 2) Trios at Ein Gev; it was solo playing, raised to a higher plane, existing more completely. His playing of the long descending counter-melody which ac- companies the return of the theme in the first movement of the Mendelssohn was marvellous in its beauty of tone, purity of line, breadth and ;Illness of phrase, intense singleness of pur- pose; but it remained an accompanying figure, pianissimo, not usurping the function of the cello. Leonard Rose, though possibly the least striking musical personality of the three, is a player of noble warmth and unforced strength. Eugene Istomin seemed slightly handicapped at Ein Gev by the kibbutz piano, an old, rather shallow-toned boudoir grand, but in the Trio's second programme, which I heard in Tel-Aviv, he fully revealed himself as an imaginative artist no less rounded and masterly than his two colleagues.

The descent, on the following evening, to the Budapest Quartet's fifth and final Beethoven recital in Tel-Aviv was steep indeed. I have not admired this ensemble's recent Beethoven records, but nothing fluctuates like a quartet, and I was more than willing to be persuaded. Yet the very first phrase, the fugue subject which opens op. 131, betrayed them. One need not agree with Wagner that this is the saddest music ever com- posed to grasp that the eight crotchets which fol- low the sforzato must be both flowing and drag- ging in character, with a sense of suffering at once continuing and transcended, and that now, as each note succeeded the last too soon, too smoothly, it was for the moment as if Beethoven had lived in vain. I admit the players' fine feeling for grades of dynamics, their quiveringly sensitive awareness of p, pp and mp, but in this context it was a barren virtue. An example of hypersophisticated wrong- headedness, in the Andante of op. 131, was the rallentando they inserted just before the seven- teenth bar of the adagio variation in six /eight-- a point where the whole character of the music insists on an absolutely even movement of notes. Even in their relatively successful op. 18 no. 6 too much was squandered in unholy haste; in the first movement their tempo sacrificed clear articu- lation of the semiquaver turn, and with it the essential joie de vivre and physical vitality of the music, to a merely mechanical high spirits. Where they did hold back the tempo and attempt to dig into the substance of the music, as in the finale of op. 131, they seemed to lack strength. This fainéant impression, however, may have come from the great distance across which I heard them (the Mann Auditorium at Tel-Aviv, like the Festival Hall, is too big for chamber music). In the Schubert Quintet at Jerusalem, where I was sitting a few yards from the players, it was dif- ferent. But then they had Casals, at first cello, to instil the fear of the Lord and the beginning of wisdom.

This was an absorbing performance. But the event which above all made the festival for me most memorable was the playing of Rudolf Serkin. This great, and deeply modest, man played two Mozart piano concertos, the A major (K 414) and D minor, with an insight and inten- sity that I have seldom heard equalled. There is hardly a Beethoven player in the world to cotn- pare with Serkin, but to find the balance in Mozart that he has found between force and delicacy, clarity and warmth, without ever falling into grandiosity on the one side or gentility and affec- tation on the other, is a rarer achievement. There were moments near the beginning of both con- certos when nervousness seemed to lead him into wayward, capricious changes of tempo, but this quickly disappeared. Some of his tempos were very fast, but it was a fastness which never sacri- ficed sense, and which came from the sheer posi- tive intensity of his response to the music. He played the theme in the finale of the D minor as if the devil drove him on. The whole thirteen-bar paragraph was carried through as a single phrase, on a single rhythmic impulse; at the same time, miraculously, the music never ceased to sing. It would be impossible to imagine the theme of the slow movement played more beautifully or, apparently, more straightforwardly; it had that divine simplicity which of all qualities in Mozart is the hardest to catch, and the most essential.

In its first venture into the international festival business Israel was justified in playing safe. But the hopes for such a festival in future lie surely in giving it a more truly local character. The ideal means is ready to hand—the Bible, and the music it has inspired and still inspires. One has alarming visions of Carissimi's Jepthah, but in fact there is no lack of great music—Moses and Aaron, the Symphony of Psalms, Threni, Belshazzar's Feast, The Play of Daniel, to name a few at random. Then Handel: if this is not quite the place to advocate Israel in Egypt, there is Solomon, Samson and Judas Maceabaeus. There is also the music being written to Biblical subjects by Israeli composers like Partos, Avidom, Boscovich. Such a framework would, without artificiality, be much more than a giMmick to catch tourists. By drawing on this source Israel can have a genuinely original festival to offer in a crowded market.