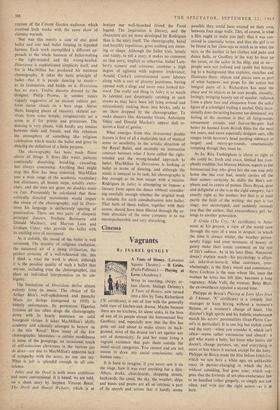 By ISABEL QUIGLY A Taste of Honey. (Leicester Square Theatre.) — 11 Grido. (Paris-Pullman.) — Playing at Love. (Academy.) WITH its touching, chirpy, ur- ban charm, Shelagh Delaney's A Taste of Honey, now turned into a film by Tony Richardson ('X' certificate), is out of line with the generally held view of kitchen-sink drama. Maybe because there are no kitchens, let alone sinks, in the lives of any of its people except the homosexual litly Geoffrey; and, especially now that the film has gone out and about to make streets its back- ground, most of the drama isn't set against any sort of domesticity, Jo and her mum living a vagrant existence that puts them outside the usual social categories. You cannot and are not meant to draw any social conclusions; only human ones.

It is hard to imagine, if you never saw it on the stage, how it was ever anything but a film. Alleys, docks, churchyards, shopping streets, backyards, the canal, the sky, the weather, ships and buses and prams are all so intrinsic a part of its speech and action that it hardly seems possible they could have existed on their own, between four stage walls. This, of course, is what a film ought to make you feel: that it was con- ceived in cinematic terms, and that the girl is to be found in her close-ups as much as in what she says, or the mother in her clothes and pubs and dance halls, or Geoffrey in the way he fixes up the room, or the sailor in his ship, and so on— people seen not isolated and spotlit but belong- ing to a background that explains, enriches and illustrates them; objects and places seen as part of what happens, not props for the action but integral parts of it. Richardson has used the place and its objects as he uses people, moodily, lovingly, bringing beauty out of squalor, radiance from a plain face and eloquence from the sulky figure of a schoolgirl trailing a satchel. Only occa- sionally does the setting become too dominant; my feeling at the moment is that all fairgrounds, amusement arcades and fun-on-the-pier had better be banned from British films for the next ten years, and more especially dodgem cars, rifle ranges (with heroine's head peeping sideways at target) and merry-go-rounds, cinematically tempting though they must be.

As Jo, Rita Tushingham is about as right as she could be, fresh and exact, limited but com- pletely credible; but Murray Melvin, superb as the homosexual boy who gives her the one and only home she has ever had, nearly carries off the final scenes—certainly he shifts the film's em- phasis and its centre of pathos. Dora Bryan, dear and delightful as she is in the right category, isn't exactly right as the mother, but that is at least partly the fault of the writing; the part is too stagy, too stereotyped, and suddenly reminds you that the author, that extraordinary girl. be- longs to another generation.

11 Grido (The Cry, 'A' certificate) is Anto- nioni at his greyest, a view of the world seen through the eyes of a man in despair, in which the time is always winter, the weather perma- nently foggy and even moments of beauty or gaiety make their ironic comment on the rest of life's sadness. As in his later films, Antonioni doesn't explain much—his psychology is ellipti- cal, take-it-or-leave-it; what convinces, over- whelmingly, is the film's mood and consistency. Steve Cochran is the man whose life, once the woman he loves has left him, becomes a long vagrancy; Alida Valli, the woman; Betsy Blair, the ex-sweetheart rejected a second time.

Philippe de Broca's Playing at Love (Les Jeux de l'Amour, 'X' certificate) is a comedy that manages to keep fizzing without a moment's flatness or a moment's change of heart. The director's high spirits and his balletic exuberance match his actors' personalities (Jean-Pierre Cas- sel's in particular). It is one big but stylish romp and the story—when you consider it, which isn't often—seems rather extraneous and absurd : a girl who wants a baby, her lover who insists she doesn't, change partners, set, and everything is more or less where it started, except for the baby. Philippe de Broca made the film before Infidelity, which we saw here a while ago, an unlikcable essay in partner-changing in which the fizz, without subsiding, had gone sour; which sug- gests that the formula of sex-plus-exuberance has to be handled rather gingerly, or simply not too often, and with just the right actors—as it is here.