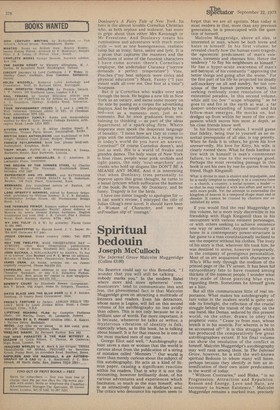 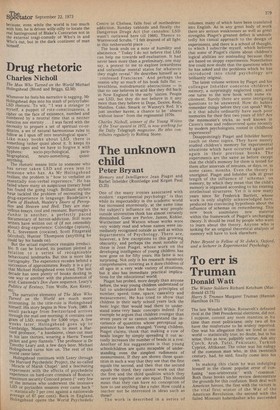 No Beatrice could say to this Benedick, "I wonder that you will still be talking . . nobody marks you." In the modern Babel where more and more ephemeral 'communicators' tend to communicate less and less, the phenomenal fact is that Malcolm Muggeridge goes on attracting a multitude of listeners and readers. Even his detractors, whose name is Legion, will fall on this second volume of his autobiography no less avidly than others. This is not only because he is a brilliant user of words. Far more important, it is because, whenever he talks or writes, a mysterious vibration of identity is felt, especially when, as in this book, he is talking about himself. It is for that reason he is one of the most marked men of our time.

George Eliot said well, "Autobiography at least saves a man or woman that the world is curious about from the publication of a string of mistakes called 'Memoirs '." Our world is more than merely curious about the subject of this autobiography. He acts as a kind of litmus paper, causing a significant reaction within his readers. That is why it is not the recounting, however brilliantly done, of his various adventures and experiences which fascinates, so much as the man himself, who, is as attractively elusive as Hadrian's soul, The critics who denounce his egotism seem to forget that we are all egotists. Man today is most modern in that, more than any previous generation, he is preoccupied with the question of himself, Malcolm Muggeridge, above all else, is interested in man, whom be both loves and hates in himself. In his first volume, he revealed clearly how the human comi-tragedy, the egocentric predicament of man's existence, torments and obsesses him. Hence the tendency "to flay his neighbours as himself." He has a hyper-acute awareness of man's self-betrayal, of his constantly "approving' the better things and going after the worse." For the first part of his life he projected his deadly self-mockery on all and sundry, far too conscious of the human persona's warts, but seeking restlessly some resolution of the existential paradox. In this second volume, while still too few " scape whipping " as he goes to and fro in the earth at war, a far deeper understanding of himself and his fellow-man emerges. He mocks on, but dredges up from within far more of the compassion which moves him most at depth, as his close friends know well.

In his hierarchy of values, I would guess that fidelity, being true to yourself as an es sential prerequisite of all else, is top priority.

When he finds it in others, he gives his love unreservedly. His love for Kitty, his wife, is clearly rooted there. What he finds hardest to live with in himself is man's commonest failure, to be true to the sovereign good.

Perhaps the most revealing passage in this book is not his own by one he quotes from his friend, Hugh Kingsmill:

What is divine in man is elusive and impalpable, and he is easily tempted to embody it in a concrete form — a church, a country, a social system, a leader — so that he may realise it with less effort and serve it with more profit. Yet the attempt to externalise the kingdom of heaven in a temporal shape must end in disaster. It cannot be created by charters nor established by arms.

If you would find the real Muggeridge in this volume, he is more truly discernible in his friendship with Hugh Kingsmill than in his encounters with various eminent personages, or with others seeking to achieve eminence one way or another. Anyone obviously at home in a contemporary power-structure is fair game to a man constitutionally inclined to see the emperor without his clothes. The irony of his story is that, wherever life took him, he was destined to arrive, however temporarily, in the company of prestigious personalities. Most of us are acquainted with characters in Who's Who only through the medium of the printed page or the TV screen, It has been hig extraordinary fate to have roamed among thickets of the topmost people. I wonder what they made of those piercing blue eyes, regarding them. Sometimes he himself gives us a hint.

But all this communicates little of real importance. What makes his autobiography of' rare value in the modern world is quite outside its limelight, the reflection of the crucial struggle behind the transit of the ego; on the one hand, like Demas, seduced by this present world, on the other, drawn to obey the prophetic voice, "Cease ye from man, whose breath is in his nostrils. For wherein is he to be accounted of?" It is this struggle which has produced the comparatively few great autobiographies extant. If his final volume can show the resolution of the conflict in himself, Malcolm Muggeridge's autobiography may well rank among them. In The Infernal Grove, however, he is still the well-known spiritual Bedouin to whom many will listen, perhaps because they identify in him an intensification of their own inner predicament in the world of today.

"Without Contraries," said Blake, "is no Progression: Attraction and Repulsion, Reason and Energy, Love and Hate, are necessary to human Existence." Malcolm Muggeridge remains a marked man, precisely

because, even while the world is too much with him, he is driven willy-nilly to locate the real battleground of Blake's Contraries not in the external tragi-comedy of Who's in and Who's out, but in the dark continent of man himself.