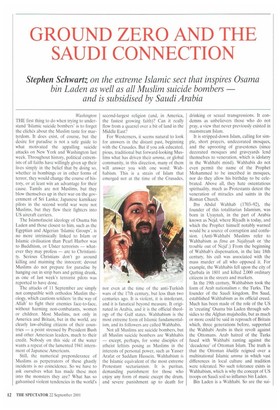 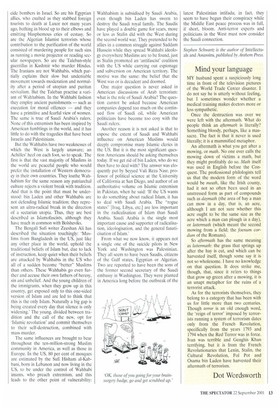 GROUND ZERO AND THE SAUDI CONNECTION

Stephen Schwartz on the extreme Islamic sect that inspires Osama

Washington THE first thing to do when trying to understand 'Islamic suicide bombers' is to forget the clichés about the Muslim taste for martyrdom. It does exist, of course, but the desire for paradise is not a safe guide to what motivated the appalling suicide attacks on New York and Washington last week. Throughout history, political extremists of all faiths have willingly given up their lives simply in the belief that by doing so, whether in bombings or in other forms of terror, they would change the course of history, or at least win an advantage for their cause. Tamils are not Muslims, but they blow themselves up in their war on the government of Sri Lanka; Japanese kamikaze pilots in the second world war were not Muslims, but they flew their fighters into US aircraft carriers.

The Islamofascist ideology of Osama bin Laden and those closest to him, such as the Egyptian and Algerian 'Islamic Groups', is no more intrinsically linked to Islam or Islamic civilisation than Pearl Harbor was to Buddhism, or Ulster terrorists — whatever they may profess — are to Christianity. Serious Christians don't go around killing and maiming the innocent; devout Muslims do not prepare for paradise by hanging out in strip bars and getting drunk, as one of last week's terrorist pilots was reported to have done.

The attacks of 11 September are simply not compatible with orthodox Muslim theology, which cautions soldiers 'in the way of Allah' to fight their enemies face-to-face, without harming non-combatants, women or children. Most Muslims, not only in America and Britain, but in the world, are clearly law-abiding citizens of their countries — a point stressed by President Bush and other American leaders, much to their credit. Nobody on this side of the water wants a repeat of the lamented 1941 internment of Japanese Americans.

Still, the numerical preponderance of Muslims as perpetrators of these ghastly incidents is no coincidence. So we have to ask ourselves what has made these men into the monsters they are? What has so galvanised violent tendencies in the world's second-largest religion (and, in America, the fastest growing faith)? Can it really flow from a quarrel over a bit of land in the Middle East?

For Westerners, it seems natural to look for answers in the distant past, beginning with the Crusades. But if you ask educated, pious, traditional but forward-looking Muslims what has driven their umma, or global community, in this direction, many of them will answer you with one word: Wahhabism. This is a strain of Islam that emerged not at the time of the Crusades, nor even at the time of the anti-Turkish wars of the 17th century, but less than two centuries ago. It is violent, it is intolerant, and it is fanatical beyond measure. It originated in Arabia, and it is the official theology of the Gulf states. Wahhabism is the most extreme form of Islamic fundamentalism, and its followers are called Wahhabis.

Not all Muslims are suicide bombers, but all Muslim suicide bombers are Wahhabis — except, perhaps, for some disciples of atheist leftists posing as Muslims in the interests of personal power, such as Yasser Arafat or Saddam Hussein. Wahhabism is the Islamic equivalent of the most extreme Protestant sectarianism. It is puritan, demanding punishment for those who enjoy any form of music except the drum, and severe punishment up to death for drinking or sexual transgressions. It condemns as unbelievers those who do not pray, a view that never previously existed in mainstream Islam.

It is stripped-down Islam, calling for simple, short prayers, undecorated mosques, and the uprooting of gravestones (since decorated mosques and graveyards lend themselves to veneration, which is idolatry in the Wahhabi mind). Wahhabis do not even permit the name of the Prophet Mohammed to be inscribed in mosques, nor do they allow his birthday to be celebrated. Above all, they hate ostentatious spirituality, much as Protestants detest the veneration of miracles and saints in the Roman Church.

Ibn Abdul Wahhab (1703-92), the founder of this totalitarian Islamism, was born in Uyaynah, in the part of Arabia known as Nejd, where Riyadh is today, and which the Prophet himself notably warned would be a source of corruption and confusion. (Anti-Wahhabi Muslims refer to Wahhabism as fitna an Najdiyyah or 'the trouble out of Nejd'.) From the beginning of Wahhab's dispensation, in the late 18th century, his cult was associated with the mass murder of all who opposed it. For example, the Wahhabis fell upon the city of Qarbala in 1801 and killed 2,000 ordinary citizens in the streets and markets.

In the 19th century, Wahhabism took the form of Arab nationalism v. the Turks. The founder of the Saudi kingdom, Ibn Saud, established Wahhabism as its official creed. Much has been made of the role of the US in 'creating' Osama bin Laden through subsidies to the Afghan mujahedin, but as much or more could be said in reproach of Britain which, three generations before, supported the Wahhabi Arabs in their revolt against the Ottomans. Arab hatred of the Turks fused with Wahhabi ranting against the 'decadence' of Ottoman Islam. The truth is that the Ottoman khahfa reigned over a multinational Islamic umma in which vast differences in local culture and tradition were tolerated. No such tolerance exists in Wahhabism, which is why the concept of US troops on Saudi soil so inflames bin Laden.

Bin Laden is a Wahhabi. So are the sui cide bombers in Israel. So are his Egyptian allies, who exulted as they stabbed foreign tourists to death at Luxor not many years ago, bathing in blood up to their elbows and emitting blasphemous cries of ecstasy. So are the Algerian Islamist terrorists whose contribution to the purification of the world consisted of murdering people for such sins as running a movie projector or reading secular newspapers. So are the Taleban-style guerrillas in Kashmir who murder Hindus. The Iranians are not Wahhabis, which partially explains their slow but undeniable movement towards moderation and normality after a period of utopian and puritan revivalism. But the Taleban practise a variant of Wahhabism. In the Wahhabi fashion they employ ancient punishments — such as execution for moral offences — and they have a primitive and fearful view of women. The same is true of Saudi Arabia's rulers. None of this extremism has been inspired by American fumblings in the world, and it has little to do with the tragedies that have beset Israelis and Palestinians.

But the Wahhabis have two weaknesses of which the West is largely unaware; an Achilles' heel on each foot, so to speak. The first is that the vast majority of Muslims in the world are peaceful people who would prefer the installation of Western democracy in their own countries. They loathe Wahhabism for the same reason any patriarchal culture rejects a violent break with tradition. And that is the point that must be understood: bin Laden and other Wahhabis are not defending Islamic tradition; they represent an ultra-radical break in the direction of a sectarian utopia. Thus, they are best described as Islamofascists, although they have much in common with Bolsheviks.

The Bengali Sufi writer Zeeshan Ali has described the situation touchingly: 'Muslims from Bangladesh in the US, just like any other place in the world, uphold the traditional beliefs of Islam but, due to lack of instruction, keep quiet when their beliefs are attacked by Wahhabis in the US who all of a sudden become "better" Muslims than others. These Wahhabis go even further and accuse their own fathers of heresy, sin and unbelief. And the young children of the immigrants, when they grow up in this country, get exposed only to this one-sided version of Islam and are led to think that this is the only Islam. Naturally a big gap is being created every day that silence is only widening.' The young, divided between tradition and the call of the new, opt for 'Islamic revolution' and commit themselves to their self-destruction, combined with mass murder.

The same influences are brought to bear throughout the ten-million-strong Muslim community in America, as well as those in Europe. In the US, 80 per cent of mosques are estimated by the Sufi Hisham al-Kabbani, born in Lebanon and now living in the US, to be under the control of Wahhabi imams, who preach extremism, and this leads to the other point of vulnerability: Wahhabism is subsidised by Saudi Arabia, even though bin Laden has sworn to destroy the Saudi royal family. The Saudis have played a double game for years, more or less as Stalin did with the West during the second world war. They pretended to be allies in a common struggle against Saddam Hussein while they spread Wahhabi ideology everywhere Muslims are to be found, just as Stalin promoted an 'antifascist' coalition with the US while carrying out espionage and subversion on American territory. The motive was the same: the belief that the West was or is decadent and doomed.

One major question is never asked in American discussions of Arab terrorism: what is the role of Saudi Arabia? The question cannot be asked because American companies depend too much on the continued flow of Saudi oil, while American politicians have become too cosy with the Saudi rulers.

Another reason it is not asked is that to expose the extent of Saudi and Wahhabi influence on American Muslims would deeply compromise many Islamic clerics in the US. But it is the most significant question Americans should be asking themselves today. If we get rid of bin Laden, who do we then have to deal with? The answer was eloquently put by Seyyed Vali Reza Nasr, professor of political science at the University of California at San Diego, and author of an authoritative volume on Islamic extremism in Pakistan. when he said: 'If the US wants to do something about radical Islam, it has to deal with Saudi Arabia. The "rogue states" [Iraq, Libya, etc.] are less important in the radicalisation of Islam than Saudi Arabia. Saudi Arabia is the single most important cause and supporter of radicalisation, ideologisation, and the general fanaticisation of Islam.'

From what we now know, it appears not a single one of the suicide pilots in New York and Washington was Palestinian. They all seem to have been Saudis, citizens of the Gulf states, Egyptian or Algerian. Two are reported to have been the sons of the former second secretary of the Saudi embassy in Washington. They were planted in America long before the outbreak of the latest Palestinian intifada; in fact, they seem to have begun their conspiracy while the Middle East peace process was in full, if short, bloom. Anti-terror experts and politicians in the West must now consider the Saudi connection.

Stephen Schwartz is the author of Intellectuals and Assassins, published by Anthem Press.