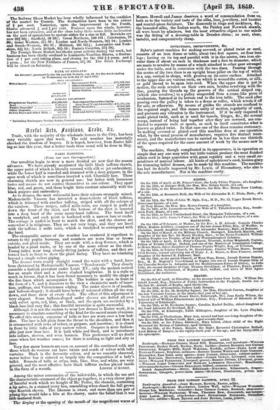 (From our own Correspondent.)

Our novelties begin to wear a more decided air now that the season advances. We have already mentioned the little black taffetas shawls, the upper point of which is literally covered with silk or jet embroidery, while the lower half is rounded and trimmed with a deep guipure, in the open work of which is sometimes inserted a rich Chantilly lace. These charming shawls are now in general use; but ladies with luxurious tastes and means do not confine themselves to one colour. They sport blue, red, and green, and these bright tints contrast admirably with the black guipure and embroidery. As to dresses, the most successful have their eolours strangely mixed. Mademoiselle Vasseur has invented a demi-toilette of black taffetas, which is trimmed with another taffetas, striped with all the colours of the rainbow. These stripes, called mille raies, are ranged in puffs all down the front* of the skirt, and the bottom of the skirt is inserted into a deep band of the same many-hued taffetas. The band itself is vandyked, and each point is bordered with a narrow lace or ruche. The corsage is puffed in front to match the skirt, and the sleeves are

somewhat il la religieuse. They are not very large, and they are lined with the taffetas u mille mica, which is vandyked to correspond with the band.

Tho changeable nature of the weather has rendered it expedient to return to the poplin burnous, and numbers are worn blue or brown

outside, and plaid inside. They are made with a deep flounce, which is headed by a plaid ruche, or by one of the same colour as the cloak. Young ladies wear long closely-fitting jackets of taffetas, and they are turned back in front to show the plaid facing. They have no trimming beyond a simple velvet piping. The dresses worn nearly straight round the waist with a band, have been christened by Mademoiselle Vasseur, " Beaubarnais." They closely resemble a fashion prevalent under Louis XV., only the modern revival has an ample skirt and a sleeve slashed lengthwise. It is a style ao much in favour, that it has been found necessary to modify the shape of the fine linen which accompanies it. The boddice is open in front in the form of a V, and it discovers to the view a chemisette made of inser- tion, puffings, and Valenciennes edging. The under sleeve is of muslin, and balloon-shaped ; it should have bows of coloured ribbon all the way down, and these show at every slash. The effect of this adjustment is very elegant. Some balloon-shaped under sleeves are dotted all over with velvet spots, red, blue, or black, and the spots are encircled by a black lace laid very flat ; this fanciful invention is quite successful. Although it is not the custom to wear low dresses in Easter week, it is necessary to simulate something of the kind for the sacred music reunions. To effect this nicety, eanezous of tulle or lace are worn over a low hod- dice. The lace is left plain from the throat to the shoulders, and then it is ornamented with rows of velvet, or guipure, and insertion ; it is closed in front by little tufts of very narrow velvet. Guipure is more fashion- able just now than lace. It is both white and black, and is introduced into collars, sleeves, and even bonnets. This preference will no doubt cease when hot weather comes; for there is nothing so light and airy as lace.

Very few straw bonnets are seen on account of the continued cold, and those which do venture out have twists and scarfs of velvet with tulle curtains. Black is the favourite colour, and as we recently observed, never before has it entered so largely into the composition of a lady's toilet. Bonnets of tulle or crêpe, rose, lilac, blue, and white, are very Feneral, and the most effective have black taffetas ruches plated inside

Among the minor necessaries of the toilet-table, in which the use and the characteristic ornament of the object go together, is a very clever piece of fanciful work which we bought of Mr. Pedler, the chemist, containing slip salve, in a stained ivory box, resembling when closed the full grown ripe Kentish cherry. The likeness is exact, and more than one pair of young lips would take a bite at the cherry, under the belief that it was rich matured fruit

The display at the opening of the month of the magnificent wares of Messrs. Howell and James deserves a word of commendation from us, both as to the variety and taste of the silks, lace, jewellery, and boudoir and mantel-piece furniture. The diamonds in rings and necklaces, &c., the brocaded silks, the Indian scarfs, the Paisley and Norwich shawls, all were beset by admirers, but the most attractive object to our minds was the fitting of a dressing-table in Dresden china ; so neat, clear, tasteful, and comparatively cheap.