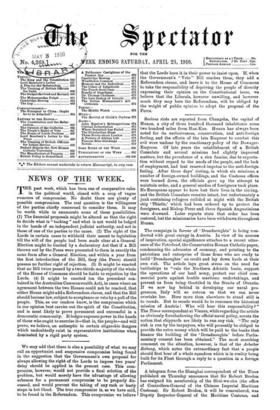 Page 1, 23 April 1910 — Serious riots are reported from Changsha, the capital of Hunan,
Close

Serious riots are reported from Changsha, the capital of Hunan,

a city of three hundred thousand inhabitants some two hundred miles from Han-Kau. Hunan has always been noted for its exclusiveness, conservatism, and anti-foreign feeling, and the efforts of the late Emperor to combat this evil were undone by the reactionary policy of the Dowager- Empress. Of late years the establishment of a British Consulate and several missions had slightly improved matters, but the prevalence of a rice famine, due to exporta- tion without regard to the needs of the people, and the lack of employment, had lent renewed impetus to the anti-foreign feeling. After three days' rioting, in which six missions, a number of foreign-owned buildings, and the Customs offices were burned down, the officials gave up the attempt to maintain order, and a general exodus of foreigners took place. No Europeans appear to have lost their lives in the rioting, and the British Consulate remains intact, but unfortunately a junk containing refugees collided at night with the British ship Thistle,' which had been ordered up to protect the foreigners, and Bishop Perez and three Spanish Augustinian' were drowned. Later reports state that order has been restored, but the missionaries have been withdrawn throughout Hunan.