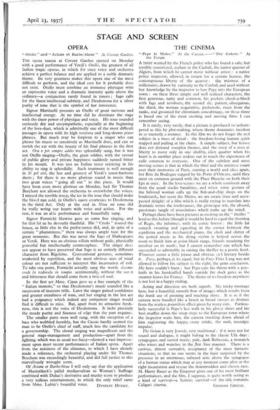 THE CINEMA A THIEF wanted by the French police who

has found a safe, but terribly constricted, asylum in the Casbah, the native quarter of Algiers, from which he cannot move without arrest : a native police inspector, allowed, in return for a certain licence, the contemptuous liberty of the quarter : the mistress of a millionaire, drawn by curiosity to the Casbah and used without her knowledge by the inspector to lure Pepe into the European town : on these three simple and well realised characters, the first generous, natty and common, his pockets chock-a-block with fags and revolvers, the second sly, patient, obsequious, the third, the woman acquisitive, prehensile, risen from the ranks, and groomed for chromium concubinage, on th2se three is based one of the most exciting and moving films I can remember seeing.

It is rarely, very rarely, that a picture is produced so unham- pered as this by plot-making, where theme dominates incident in so masterly a manner. In this film we do not forget the real subject in a mass of detail : the freedom-loving human spirit trapped and pulling at the chain. A simple subject, but fiction does not demand complex themes, and the story of a man at liberty to move only in one shabby, alien quarter when his heart is in another place widens out to touch the experience of exile common to everyone. One of the subtlest and most moving scenes is that in which the thief and the mistress count over their memories of Paris, starting a world and class apart, her Bois du Boulogne capped by his Porte d'Orlcans, until they meet on common ground with the Place Blanche on both their lips at once. In the love-scenes we are a whole continent away from the usual studio banalities, and when some gesture of the beloved woman calls up the fish-and-chip shops on the boulevards, her scent the Metro, we are aware (rare and unex- pected delight) of a film which is really trying to translate into dramatic terms the irrelevances, the grotesque wit, the absurd, passionate tangle of associations which make up the mind.

Perhaps there have been pictures as exciting on the " thriller " level as this before (though it would be hard to equal the shooting of Regis, the informer, with its comic horror : the little fat eunuch sweating and squealing in the corner between the aspidistra and the mechanical piano, the clash and clatter of the potted music as his dying victim is helped across the room to finish him at point-blank range, friends steadying the revolver on its mark), but I cannot remember one which has succeeded so admirably in raising the thriller to a poetic level. Winterset seems a little jejune and obvious n I literary beside it. Fury, perhaps, is its equal, but in Fury Fritz Lang was not allowed to follow his subject to the right, the grim conclusion. His hero couldn't burn ; but Pepe cuts his throat with a pen- knife in his handcuffed hands outside the dock gates as the steamer leaves for France. The theme of no freedom anywhere is not lost in a happy ending.

Acting and direction are both superb. No tricky montage here, but a beautiful, smooth flow of images which results from the frank use of panning and trucking shots. It is as if the camera were handled like a brush in broad sweeps as distinct from the restless pointilliste effect given by many cuts. Particu- larly successful is Pepe's last walk in his glossy shoes and his best muffler down the steep steps to the European town where the inspector waits him, the camera trucking down ahead of him registering the happy, crazy stride, the rash, nostalgic impulse.

The Golem is very Jewish, very traditional : if it were not for sound and dialogue, it might belong to the classic Ufa days : synagogues and sacred music, pale, dark Rebeccas, a monarch who wines and wenches in the Jew Sias manner. There is a curious, almost surrealist, acceptance of the most fantastic situations, so that no one seems in the least surprised by the presence in an enormous, raftered attic above the synagogue of a human statue which may at any moment come alive at the right incantation and rescue the downtrodden and chosen race. M. Harry Bauer as the Emperor gives one of his most brilliant performances, and the film, I suppose, is quite worth seeing as a kind of survival—a Semitic survival—of the old, romantic