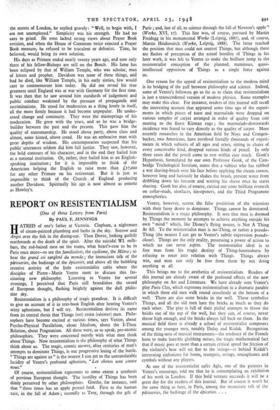 a nightmare of cream-painted plumbing and baths in the sky. Sorrow and Angst over the fish in the dining-car. Then Dover, looking guiltily northwards at the death of the spirit. After the suicidal WI. milk- bars, the red-haired men on the trams, what heart's-ease to be in Paris once more—to see the famihsteres, the cyclisme, the Metro ; to hear the grand cri sanglote du monde ; the insouciant talk of the patisseries, the badinage of the epiceries, and above all the bubbling creative activity of the little resistentialist cafes where the disciples of Pierre - Marie Ventre meet to discuss this fas- cinating new philosophy. Listening to Ventre for several evenings, I perceived that Paris still brandishes the sword of. European thought, flashing brightly against the dull philis- tine sky. Resistentialism is a philosophy of tragic grandeur. It is difficult to give an account of it in text-book English after hearing Ventre's witty aphorisms, but I will try. Resistentialism derives its name from its central thesis that Things (res) resist (resister) men. Philo- sophers have become excited at various times, says Ventre, about Psycho-Physical Parallelism, about Idealism, about the I-Thou Relation, about Pragmatism. All these were, so to speak, pre-atomic philosophies. They were concerned merely with what men think about Things. Now resistentialism is the philosophy of what Things think about us. The tragic, cosmic answer,, after centuries of man's attempts to dominate Things, is our progressive losing of the battle. "Things are against us" is the nearest I can get to the untranslatable lucidity of Venue's profound aphorism, "Les choses sont contre nous."

Of course, resistentialism represents to some 'extent a synthesis of previous European thought. The hostility of Things has been dimly perceived by other philosophers. Goethe, for instance, said that " three times has an apple proved fatal. First to the human race, in the fall of Adam ; secondly to Troy, through the gift of Paris ; and, last of all, to science through the fall of Newton's apple " (Werke, XVI, 57). This line was, of course, pursued by Martin Freidegg in his monumental Werke (Leipzig, 1887), and, of course, Martin Heidansieck (Werke, Leipzig, i888). The latter reached the position that man could not control Things, but although there are flashes of perception of the actual hostility of Things in his later work, it was left to Ventre to make the brilliant jump to the resistentialist conception of the planned, numinous, quasi- intellectual opposition of Things as a single force against us.

One reason for the appeal of resistentialism to the modern mind is its bridging of the gulf between philosophy and science. Indeed, some of Ventre's followers go so far as to claim that resistentialism is just a transcendental version of modern physics. Some examples may make this clear. For instance, readers of this journal will recall the interesting account that appeared some time ago of the experi- ments in which pieces of toast and marmalade were dropped on various samples of carpet arranged in order of quality from coir matting to the finest Kirman rugs ; the marmalade-downwards incidence was found to vary directly as the quality of carpet. More recently researches in the American field by Noys and Crangen- backer, two Americans, have involved literally thousands of experi- ments in which subjects of all ages and sexes, sitting in chairs of every conceivable kind, dropped various kinds of pencil. In only three cases did the pencil come to rest within easy reach. Gonk's Hypothesis, formulated by our own Professor Gonk, of the Cam- bridge Trichological Institute, states that a subject who has rubbed a wet shaving-brush over his face before applying the cream cannot, however long and furiously he shakes the brush, prevent water from dribbling down his forearm and wetting his sleeve once he starts shaving. Gonk has also, of course, carried out some brilliant research on collar-studs, shoelaces, tin-openers, and the Third Programme atmospherics.

Ventre, however, scorns the false positivism of the scientists with their fussy desire to dominate. Things cannot be dominated. Resistentialism is a tragic philosophy. It sees that man is doomed by Things the moment he attempts to achieve anything outside his own "mind" which, like Disney's flying mouse, is Not A Thing At All. To the resistentialist man is no-Thing, or rather a pseudo- Thing (the nearest I can get to Ventre's subtle expression pseudo- chose). Things are the only reality, possessing a power of action to which we can never aspire. The resistentialist ideal is to free man from his tragic destiny of Thing-hauntedness by refusing to enter into relation with Things. Things always win, and man can only be free from them by not doing anything at all.

This brings me to the aesthetics of resistentialism. Readers of this journal are already aware of the profound effects of the new philosophy on Art and Literature. We have already seen Ventre's play Puits Clos, which expresses resistentialism in a dramatic parable in which three old men walk round ceaselessly at the bottom of a well. There are also some bricks in the well. These symbolise Things, and all the old men hate the bricks as much as they do each other. The play is full of their pitiful attempts to throw the bricks out of the top of the well, but they can, of course, never throw high enough, and the bricks always fall back on them. In the musical field there is already a school of resistentialist composers among the younger men, notably Dufay and Kodak. Recognition of the thing-ness of musical instruments—the tendency of the French horn to make horrible glubbing noises, the tragic mathematical fact that if music goes at more than a certain critical speed the friction of the violinist's bow will set fire to the strings—is behind Kodak's interesting sinfonietta for horns, trumpets, strings, sousaphones and cymbals without any players.

At one of the resistentialist cafés Agfa, one of the painters in Ventre's entourage, told me that he is contemplating an exhibition of his work in London. If this bold venture succeeds it will be a great day for the readers of this journal. But of course it won't be the same thing as here, in Paris, among the insouciant talk of the patisseries, the badinage of the epiceries. . . .