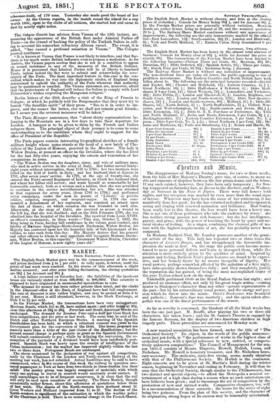 The Cologne Gazette has advices from Vienna of the 15th

instant, an- nouncing the appearance of the British fleet under Admiral Parker off Tunis—on the errand of backing the policy of the "Turkish Sultan in call- ing to account his somewhat refractory African vassal. The event, it is added, "has caused a profound sensation at Vienna." The Cologne journal continues- " It is known at Vienna that France is not likely to interfere, and that Sar- dinia is too much under British influence event° propose a mediation. As for Austria, the Vienna papers confess that she is not in a condition to oppose an armed resistance to any of the measures of the British Cabinet. Hence it is presumed that Admiral Parker will be at liberty to bombard Tunis, unless indeed the Bey were to submit and acknowledge the sove- reignty of the Porte. The most important feature in this case is the con- viction which makes its way into the diplomatic circles, of England being determined to uphold the authority of the Porte wherever that authority may be questioned or assailed. The Vienna statesmen are, moreover, afraid that the protectorate of England will induce the Sultan to comply with Lord Palmerston's wishes respecting the Hungarian refugees."

Berlin letters of the 20th describe a visit of the King of Prussia to Cologne, at which he publicly told the Burgomaster that they must try to banish "the fiendlike spirit" of their press. " See to it in order to im- prove, and the sooner the better, else we shall not remain good friends; for I assure you the severest measures will be taken."

The Paris Messager announces, that "about thirty representatives be- longing to the Mountain are in a few days to take their departure for London. A banquet is to be given to them by the French and Italian refugees there. The principal object of their journey is to come to some understanding as to the candidate whom they ought to support for the office of President of the Republic."

The Paris papers contain interesting biographical sketches of a female military knight whose name stands at the head of a new batch of Che- valiers of the Legion of Honour, gazetted in the Moniker. The lady is Widow Brulon, at present an officer in the Invalides, where she has lived for the last fifty-two years, enjoying the esteem and veneration of her eumpanions in arms. " The Widow Brulon was the daughter, sister, and wife of military men, Who died in active service in the army of Italy. Her father served thirty- eight years without interruption, from 1757 to 1795 ; her two brothers were killed on the field of battle in Italy ; and her husband died at Ajaccio in 1791, after seven years' service. In 1792, at the age of twenty-one, she entered the Forty-second Regiment of Infanhy, in which her husband died, and where her father still served; and made herself so remarkable by her honourable conduct, both as a woman and a soldier, that she was permitted to continue in the service notwithstanding her sex. She was attached to that regiment for seven years, (from 1792 to 1799,) and performed seven campaigns, under the nom de guerre of Liberte,' as private soldier, corporal, sergeant, and sergeant-major. In 1794 she com- manded a detachment of her regiment, and repulsed an attack upon the fort of Gesco - on which occasion she was wounded in each arm. Afterwards, at the siege of Calvi, she received so severe a wound in the left leg, that she was disabled; and on the 24th Frimaire 1799, she was admitted into the hospital of the Invalides. She received from Louis XVIII. an officer's commission, in these words—'This day, October 2, 1822, the King being in Paris, having full confidence in the valour, good conduct, and fidelity of Madame Angelique-Marie-Joseph Duchemin, Widow Brulon, his Majesty has conferred upon her the honorary title of Sub-Lieutenant of In- valides, to take rank from this day. His Majesty desires that his general and other officers to whom it may appertain will recognize Madame Duche- min, Widow Brulon, in this-capacity. Lieutenant Widow Brulon, Chevalier of the Legion of Honour, is now eighty years old."