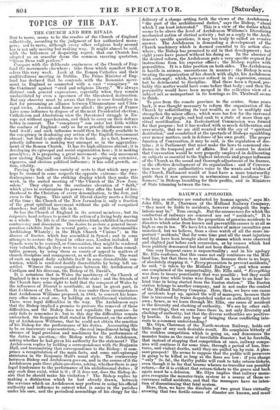 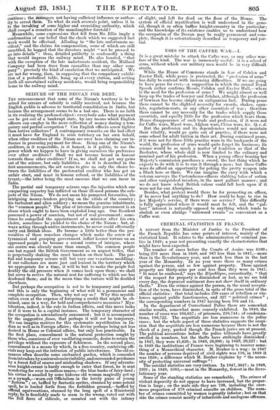 " So long as railways are conducted by human agents," says Mr. John Ellis, M.P., Chairman of the Midland Railway Company, " they must be liable to accidents, however stringent the regu- lations may be." True enough. But the occurrences for which the conductors of railways are censured are not " accidents." It is much to be doubted whether the proportion of genuine accidents to disasters which arise from known and preventible causes is at all so high as one in ten. We have let a number of minor casualties pass unnoticed, but we believe, from a close watch of all the more im- portant " accidents," that for some time past all the most injurious and fatal have been brought about by causes which were observed and slighted just before each occurrence, or by causes which had been publicly denounced but had not been discontinued.

One very frequent cause is unpunctuality ; and in his apology Mr. Ellis confesses, that this cause not only continues on the Mid- land line, but that there is no intention, because there is no hope, of absolutely stopping it. "Every precaution to prevent accidents," he said, "is taken by the Midland Railway "; and when some one complained of the unpunctuality, Mr. Ellis said, "Everything was done to insure punctuality that was possible ; but they could not keep time while trains were from half an hour to an hour be- hind time in being started from the Euston station." The Euston station belongs to another company, and is not under the control of the Midland Railway Company. Here, then, we have one cause of accidents kept up, against the will of managers, because their line is traversed by trains despatched under an authority not their own ; hence, as we learn through Mr. -Pills, one cause of accident is the diversity and clashing of authority. We see by other rail- way meetings, that on some lines there is, not only diversity and clashing of authority, but that the diverse authorities are positive- ly hostile. Is there any hope of bringing these conflicting inte- rests to a common understanding?

Mr. Glyn, Chairman of the North-western Railway, holds out little hope of any such desirable result. He complains bitterly of the reckless competition which is going on, and denounces the monster trains as the cause of inevitable disaster ; but he foretells, that instead of stopping that competition at once, railway compa- nies will continue it for some time, through a period of loss, frac- tures, and violent deaths, until they are pulled up by ruin. A plea- sant prospect! He seems to suppose that the public will persevere in going to be killed as long as the fares are low : if you charge " only" 2s. 6d., the thrifty public will rush to take return-tickets, even though it be for that bourne whence no traveller can possibly return,—for it is evident that return-tickets to the grave and back again must be a delusion. Mr. Glyn implies that railway mana- gers recognize the monster-train system as a source of those oc currences called accidents, and that the managers have no inten- tion of discontinuing that fatal system. Here, then, we have the directors of two great lines virtually avowing that two fertile (tenses of disaster are known, and must"

continue ; the Mitnagers not having sufficient influence or author- ity to arrest them. To what do such avowals point, unless it be to the invoking of some higher and overriding authority, which shall compel a cessation of the manslaughter foretold ? Meanwhile, some expressions that fell from Mr. Ellis imply a confirmation of our belief that the check which we suggested last week would be effectual. Alluding to " the late unfortunate ac- cident," and the claims for compensation, some of which are still unsettled, he begged that the directors might " not be pressed to go into details " : thus, detailed publicity is confessedly a thing that would impress the railway mind. He also boasted, " that with the exception of the late unfortunate accident, the Midland Company had been freer from casualties than any other com- pany " : precisely the kind of emulation that we anticipated. We are not far wrong, then, in supposing that the compulsory exhibi- tion of a periodical table, hung up at every station, and setting forth all ascertained railway accidents, would bring responsibility home to the railway mind.