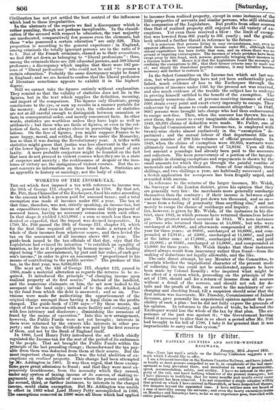 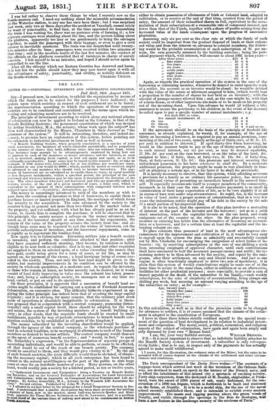 Butway,- WI August 1851. Sin—Tour last week's article -on the Railway Contusion suggests a re-, mark which I should like to offer. I am a frequent traveller on the Eastern Counties Railway, and havejoined, as loudly as most persons compelled to use it, in complaints of the bad man- agement so long prevalent there, and manifested inwant of punctuality, speed, accommodation, safety, and civility. I have noioterest in the pro- perty of the rail, and know nothing whatever of thepresent managers ; but I have pleasure in testifying, that for many months past neatly.every cause of complaint has been removed. I do not remember a single occasion that period on which Ilravearrived in Shoreditch, or been despatched thence, five minutes beyond the appointed time. I have neither seen nor heard of a case of incivility among the servants ; and even the heavy excursion-trains on Mondays and Saturdays have, -solar as my experience goes, travelled with entire punctuality. I was led rather to observe these things by what I recently saw on the smith-western rail. I need say nothing about the miserable accommodation at the Waterloo station, to any one has once been there ; but I was surprised last week, only two or ihree days after the aocident at Vauxhall, caused solely by want of punctuality, to find that, at the time appointed for despatching the train I was waiting for, there was no pretence even of forming it ; a few separate carriages were standing about the line, and the porters lolling about the platform, apparently too lazy or too gentlemanly to bring the carriages together, to assist the passengers with their luggage, or even to give a civil answer to inevitable questions. The train was not despatched until twenty- five minutes after its time ; passengers were received within two minutes of that time ; and in the needless bustle of the last few minutes, the conduct of the officials on the platform resembled that of turnkeys in charge of unruly convicts. I felt myself to be an intruder, and hoped I should never again be compelled to use the line.

After all the obloquy which our Eastern Counties has deserved and borne, it is but fair the public should know they may now travel upon it with all the advantages of safety, punctuality, and civility, so wofully deficient on