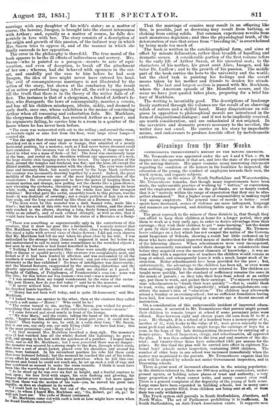 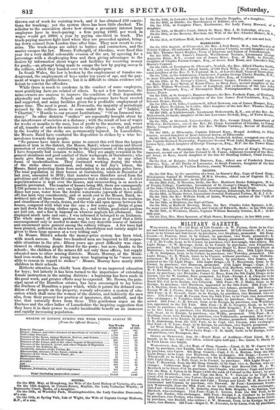 Mr. Tremenheere was appointed under the act 5 and 6 Viet c. 99, to inquire into the operation of that act, and into the state of the population of the mining districts. His paper contains many interesting statements regarding the condition of the miners in the localities he inspected; the education of the young, the conduct of employers towards their men, the truck system, and cognate subjects. In reporting on the mines of South Staffordshire and Worcestershire, Mr. Tremenheere remarks, that though many improvements have beea made, the unfavourable practice of working by " butties," or contractor% and the employment of females on, the pit-banks, are so deeply rooted, that it is "scarcely within the range of expectation that they can be alto. gether abandoned." But a higher sense of responsibility is making rapid way among employers. The general tone of morals is better : cruel sports have decreased, scenes of violence are more infrequent, language and manners are improved, and drinking habits appear to be on the del; dine.

The great reproach to the miners of these districts is, that though they can afford to keep their children at home for a longer period, they put them to work at a very early age, in order to derive advantage from their earnings ; they wish their children to get " some learning, ' but the desire of gain by their labour cuts short the time of schooling. Mr- Tremen, heere enlarges on a fact which has not escaped.the notice of the Govern:. meld Inspectork of 'Schools, showing a result but little reckoned on by those who have advocated improved means of instruction for the children of the labouring classes. When schoolmasters were very incompeten children necessarily remained under their charge for a considerable time before they acquired even the merest elements of knowledge • it was as- aumed that with a superior race of teachers the children would remain as long at school, and consequently leave it with a mach larger stock of in- struction. Better schoolmasters hare been provided for the poor ; but, unfortunately, the advantage to the children has been nil, or even worse than nothing, especially in the districts now referred to. The children are taught more quickly, but the standard of sufficiency remains the same in the minds of parents ; so they take their boys from school at an earlier age, put them to work, and pocket their earnings. The miners frequently urge schoolmasters to "finish their boys quickly "—that is, enable them to read, write, and cipher, all imperfectly; which accomplishments eon- stitute the miner's idea of "education." The children may afterwards attend a Sunday or an evening school; but no sufficient foundation having been laid, few succeed in acquiring at a mature age a decent &moulnt of instruction.

On a consideration of this unfavourable incident of improved educa- tional means, it occurred to Mr. Tremenheere that parents might permit their children to remain longer at school if some pecuniary prize were offered. Boys between eight and eleven years old earn from 6/. to 8/. a year. He thought, if in a school of a hundred boys a money-prize of 41., another of 31., with books to the value of 1/., were given annually to the moat proficient scholars, fathers might forego the earnings of boys for a year, in the hope of the lads distinguishing themselves by carrying Off a money-prize. School Inspectors, clergy, and schoolmasters, all approved the plan. It was then submitted to the iron and coal masters of the dis- trict; and twenty-three firms have subscribed 1551. per annum for the prizes. 'By this fund the plan will be carried into effect in eighteen Na- tional boys' schools under inspection, containing 2000 children. The number of older boys in one school was increased immediately when the matter was mentioned to the parents. Mr. Tremenheere expects that his plan will be adopted by schools not under Government inspection, and in Dissenting schools. There is groat need of increased education in the mining population : in the districts referred to, there are 900 men acting as contractors, under- ground agents, or holding minor places of trust and authority, a very large proportion of whom cannot write, and many cannot even read-. There is a general complaint of the depravity of the young of both sexes. Large sums have been expended in building schools, but in many cases they are not a quarter filled, from children not being seat at all, or front their too early withdrawal. The. Truck system. still prevails in South.Staffotdshire, Aberdare, and North Wales. The act of Parliament -prohibiting-it Is inefficient., la South Staffordshire, an Anti-Truck Association exists. It supports men thrown out of work for resisting truck, and it has obtained 250 convic- tions for trucking; yet the system there has been little checked. The solicitor to the association shows how strong a pecuniary interest large employers have in truck-paying: a firm paying 10001. per week in wages would get 20001. a year by paying one-third in truck. The truck-paying masters fight hard when they are proceeded against, bring- ing down counsel from London time after time. They now resort to eva- sions. The truck-shops are sublet to kitties and contractors, and the master escapes the law. Messrs. Fothergill, of Aberdare, were fined this year for a very skilful colourable evasion of the act, by agreeing for a percentage with a shopkeeping firm and then giving advantages to the dealers by information about wages and facilities for receiving money for goods,—an attempt being made to escape the law by paying money to the colliers, which they handed over to the shopkeepers.

In South Wales, the law is broken by the employment of females un- derground, the employment of boys under ten years of age, and the pay- ment of wages in public-houses ; but it is difficult to obtain evidence suf- ficient to convict the offenders.

While there is much to condemn in the conduct of some employers, most gratifying facts are related of others. In not a few instances, the mine-owners are anxious to improve the condition of their dependents physically and morally. Schools and reading-rooms have been erected and supported, and many facilities given for a profitable employment of spare time. The need is great. At Newcastle, the majority of periodicals perused by the colliers seem to come under the heads of " Infidel," " Chartist," " Hostile to our present Institutions," " Of an Immoral ten- dency." In other districts " strikes " are repeatedly brought about by the interference of societies at a distance ; with the result of loss of wages for weeks or months to the men, loss of profit to the masters, and, worst of all, transfer of orders for minerals to other places ; so that all parties in the locality of the strike are permanently injured. In Lanarkshire, the Messrs. Baird have combated the disposition to strikes by a wise be- nevolence towards their people. "No persons have taken more pains to correct this evil than the largest makers of iron in the district, the Messrs. Baird ; whose zealous and liberal promotion of everything contributing to the improvement of the population I have frequently had occasion to notice. They are amply rewarded in the general steadiness and good conduct of their work-people at erartsherrie ; who rarely give them any trouble by joining in strikes, or by any other forms of insubordination. They continued working during the whole of the strike above mentioned, and doing a full day's labour' the Messrs. Baird protecting them from molestation by .an adequate policeforce. The total population in their houses at Gartsherne, taken in December of last year, amounted to 2016; that number were therefore saved from the privations and all the other ill consequences that a strike occasions. A strict superintendence is kept over the houses, and overcrowding is as much as possible prevented. The number of houses being 385, there are consequently 8236 persons to a house ; only one lodger is allowed where there is a family. Since last year, water from the Airdrie waterworks (upwards of three miles off) has been very considerately, and at much cost to the Messrs. Baird, in- troduced into all these houses. The contrast is great between the neatness and cleanliness of the roads, drains, and the wide and open spaces between the houses, compared with what was the case a few years ago. Strips of grass are laid down for drying clothes upon, &c. ; and within, good-sized gardens are laid out, and a fine is imposed on whoever neglects h15 allotment. One displayed much taste and care ; I was informed it belonged to an Irishman. The whole aspect of these gardens may be taken as a proof that a little encouragement only is needed to make this very desirable source of interest and amusement more general among the colliery villages. A few trees had been planted, sufficient to show how much cheerfulness and variety might be given to these large squares at a very trifling cost."

In Messrs. Baird's schools the money-prize system has been tried, with much success. Some two hundred men are required to fill respon- sible situations in the pits : fifteen years ago great difficulty was expe- rienced in obtaining people fitted for the posts ; but now, thanks to the schools ; the children of the miners fill not only these offices, but supply educated men to other mining districts. Messrs. Murray, of the Monk- land iron-works, find the young men were beginning to be " more acces- sible to reason in regard to strikes" : Messrs. Murray have nearly 2000 children in their schools.

Hitherto attention has chiefly been directed to an improved education for boys ; but latterly it has been turned to the importance of extending female instruction in the mining districts : a beginning has been made in the good work, and greater efforts may be expected. Mr. Brown, the prin- cipal agent of the Hamilton estates, has been encouraged to lay before the Duchess of Hamilton a paper which, while it paints the debased con- dition of the people on the property, warmly advocates a system of edu- cation which shall raise the women of the district, and indirectly the men also, from their present low position of ignorance, dirt, unthrift, and the Vice that naturally flows from these. This gentleman urges on the Duchess and the other ladies of Lanarkshire the inspiring suggestion that they have it in their power to confer inestimable benefit on an immense and rapidly increasing population.