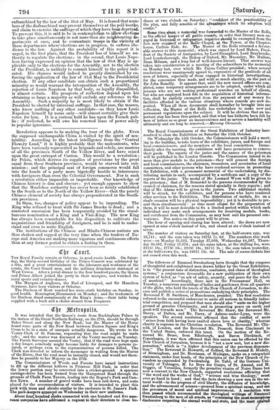 Tax Royal Family remain at Osborne, in good rustic health. On Satur- day, the thirty-second birthday of the Prince Consort was celebrated by a gtot, and a great entertainment to the labourers and workmen of the estate, the Coast Guard men, and the military detachment stationed at West Cowes. After a jovial dinner to the four hundred guests, the Queen and Prince Albert joined the party in their marquee, and watched the rural sports and country-dances. The Marquis of Anglesea, the Earl of Liverpool, and Sir Hamilton Seymour, have been visitors at Osborne.

The Duchess of Kent reached her sixty-sixth birthday on Sunday, in good health. Kensington:illuminated on Monday ; and the tradesmen of the Duchess dined sumptuously at the King's Arms,their table being supplied with a buck and a choice dessert from Frogmore.