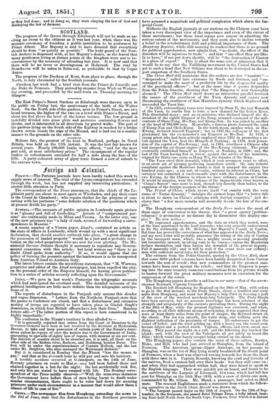 The progress of the Queen through Edinburgh will not be made so ex- citing an event to the citizens as it was last year, when there was the masenio ceremony of founding a public institution to be performed by Prince Albert. Her Majesty is said to have directed that everything should be done " ae quietly as possible." The body guard of the Scot- tish Archers is dispensed with, at her Majesty's desire, as she feared that many gentlemen living at distant points of the kingdom were put to in- convenience by the necessity of attending last year. It is now said that there will be no levee or drawingroom at Holyrood. The road by Stonehasen will be taken to Balm Taleas preferable to that by Cupar Angus.

The progress of the Duchess of Kent, from place to place, through the North, is duly chronicled by the Scottish journals.

Aberdeen last w'eelr had a brief visit from the Prince de Joinville and the Duke de Nemours. They arrived by steamer from Wick on Wednes- day evening, and proceeded by the mail-train on Thursday morning for Glasgow.

The East Prince's Street Gardens at Edinburgh were thrown open to the public on Friday last, the anniversary of the birth of Sir Walter Scott. On the North aide of the gardens, next to Prince's Street, are two broad terraces, the higher of the two on a level with Prince's Street, and about ten feet above the level of the lower terrace. The low ground is tastefully divided into grass plots and parterres containing flowers and shrubs, and is intersected in alll directions by graini walks. The part of the gardens lying on the South side of the Railway is reached by a bridge thrown across beside the edge of the Mound, and is laid out in a similar manner to the grounds on the other side.

Melrose fair, the greatest of its kind in Scotland, perhaps in Great Britain, was held on the 12th instant. It was the best fair known for -several years. Nearly 100,000 Iambs were offered, " and for the most part sold, at most satisfactory prices." The encampment of the regular traders in refreshments extended for half a mile along the base of the Kills. A party-coloured array of gipsy tents formed a sort of suburb to the canvass town.