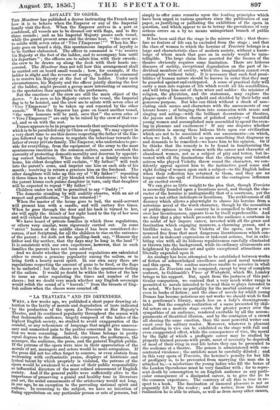 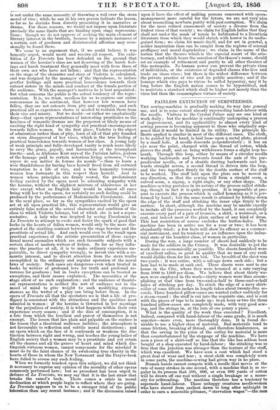 " LA TRAVIATA " AND ITS DEFENDERS.

WEEN, a few weeks ago, we published a short paper drawing at- tention to the laxity of morals and degradation of taste indicated • by the production of the opera La Traviata at Her Majesty's Theatre, and its continued popularity throughout the season with that fashionable audience, largely composed of the ladies of the highest English society, we studied to avoid exaggeration of the scandal, or any vehemence of language that might give unneces- sary and unmerited pain to the parties concerned in the transac- tion we were censuring. Indeed, the blame belongs in pretty equal degrees to the dramatist, the composer, the performers, the manager, the audience, the press, and the general English publio. If the patrons of the opera were nice in their appreciation of the morals of art, managers and actors would be more scrupulous. If the press did not too often forget to censure, or even abstain from welcoming with enthusiastic praise, displays of histrionic and lyrical talent by which propriety is violat4 the patrons of the opera would be awakened to a sense of their public responsibility as influential directors of the most refined amusement of English society. And if the general public were sufficiently alive to the importance of preserving a genial and healthy tone in literature and art, the social amusements of the aristocracy would not long, in our age, be an exception to the pervading national spirit and culture. In recurring to the subject, we have no intention of fixing opprobrium on any particular person or sets of persons, but

simply to offer some remarks upon the leading principles which have been urged in various quarters since the publication of our paper, as justifying or palliating the exhibition of the opera in question, and which appear to us to betray the prevalence of very serious errors on a by no means unimportant branch of public morals.

It has been said that the stage is the mirror of life ; that there- fore no feature of life can be excluded from the stage • and that the class of women to which the heroine of Traviata belongs is a large and characteristic class of modern society, without a know- ledge of whom much that goes on in society would be unin- telligible. The large claim thus asserted for the licence of the theatre obviously requires some limitation. There are hideous diseases of society, exceptional degradation on the part of in- dividual members of society, which the imagination cannot even contemplate without taint. It is necessary that such foul possi- bilities of human nature should be known in order that they may be guarded against and extirpated. A sense of practical duty will carry a man into regions of life which revolt all his sensibilities, and will bring him out of them wiser and sadder : the minister of religion, the physician, and the statesman, may explore the plague-spots of humanity, upheld and shielded by their lofty and generous purpose. But who can think without a shook of asso- ciating such scenes and characters with the amusements of our leisure hours ; of bringing them into connexion with music and singing and acting—with the brilliant decorations of thee

ing in pleasure and excitement ? If any one disputes whether prostitution is among these hideous blots upon our civilization which are not to be associated with our amusements—on which, when we look, it should be as upon something that disgraces us and demands to be remedied—we leave him to his opinion. Or if he thinks that the remedy is to be found in familiarizing the minds of virtuous young women with the career and character of abandoned women, not as a subject of pity and terror, but in- vested with all the fascinations that the charming and talented actress who played Violetta threw round the character, we con- fidently appeal against him to the instinctive good sense and right feeling of women upon such a subject—to the English ladies when their reflection has returned to them, and they are no longer under the spell of Piccolomini or the contagious influence of an excited crowd.

We can give as little weight to the plea that, though Traviata is avowedly founded upon a licentious novel, and though the cha- racter of the heroine is undisguisedly that of a courtesan, yet the opera is not either indelicate or licentious. The recklessness of all decency which allows a playwright to choose his heroine from a notorious novel of the worst character, though by the necessities of public opinion in this country he is compelled to throw a veil over her licentiousness, appears to us by itself reprehensible. And we deny that a play which presents to the audience a courtesan in

the midst of her impure career, invested with all the grace and fascination which engaging manners, a charming person, and a

birdlike voice, lent to the Violetta of the opera, can be pro-

nounced free /tem that most dangerous licentiousness which con- sists not in indecent expressions or indecent actions, but in exhi- biting vice with all its hideous repulsiveness carefully eliminated or thrown into the background, while its ordinary allurements are heightened by elaborate art and quite exceptional attractions are liberally expended upon it.

An analogy has been attempted to be established between works of fiction of acknowledged excellence and good moral tendency and this opera. We confess ourselves unable to perceive in what respects La Traviata can be compared, except by way of complete contrast, to Goldsmith's Vicar of Wakefield, which Mr. Lumley brings to his support. But, apart from the justness of this par- ticular comparison, we contend that a very much wider range is permitted to novels intended to be read than to plays intended to be acted. We have no partiality for the morbid anatomy of vice even in books of fiction ; and the class of novels for which young Dumas has become notorious are not works we should wish to find in a gentleman's library, much less on a lady's drawingroom-

table. But the complete realization of a scene presented by 'skil- ful actors on a modern stage exerts far greater power over the

sympathies of an audience, rendered excitable by all the accom- paniments of theatrical illusion, and by the contagion of a crowd all sharing the same emotion, than the most powerful writer can exert over his solitary reader. Moreover, whatever is pleasant and alluring in vice can be exhibited on ihe stage with full and even exaggerated effect, while the consequences of vice, the moral by the light of which a profligate career may be studied by properly trained persons with profit, must of necessity be deprived of most of their sting in real life before they can be presented to the audience at a theatre. The poison is administered with con-

centrated virulence ; the antidote must be carefully diluted ; and in this very opera of Traviata, the heroine's penalty for her life of profligacy is, to be prevented from marrying the man she is attached to,—a misfortune the young ladies who fill the boxes of the London Operahouse must be very familiar with ; for to repre- sent death by consumption to an English audience as any parti- cular consequence of a dissipated career, is to give the he to the common experience. The contrary of all this is true in re- spect to a book. The fascination of immoral pleasure is not so piquantly felt by the reader ; and the writer, from the fainter realization he is able to attain, as well as from many other causes,

is not under the same necessity of throwing a veil over the stern moral of vice ' • while he can in his own person indicate the lesson, so far as he shrinks from directly presenting it in narrative or drama. For these reasons, we would not impose upon literature precisely the same limits that are binding upon stage representa- tions ; though we do not approve of seeking the main element of literary interest in the brothels, because by a miracle instances of a certain sort of goodness and disinterested affection may occa- sionally be found there.