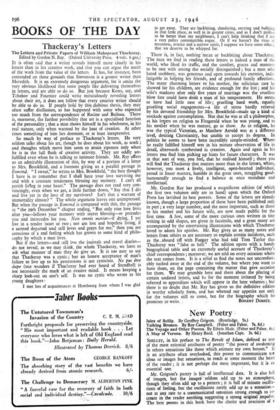 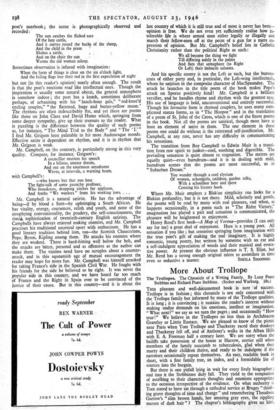 SHELLEY, in his preface to The Revolt of Islam, defined as one of the most essential attributes of poetry " the power of awakening in others sensations like those which animate my own bosom." It is an attribute often overlooked, this power to communicate not ideas or images but sensations, to reach at some moment the heart of the reader ; it is not perhaps the most important, but it is an essential one.

Mr. Grigson's poetry is full of intellectual data. It is also full of images, but the images' seldom add up to an atmosphere, though they often add up to a pattern ; it is full of minute oscilla- tions of feeling, but the oscillations rarely add up to a sensation— not at any rate to a communicated sensation strong enough to re- create in the reader anything suggesting a strong original impulse. The best poems in this book have the clarity and precision of a

poet's notebook ; the scene is photographically observed and recorded: The sun catches the flicked ears Of the lazy cattle, And it curves round the backs of the sheep, And the child in the pram Shakes a rattle, And on the chair the sun Warms the old woman asleep.

Sometimes observation is infused with imagination: When the form of things is clear on the six o'clock light, And the failing flags lose their red in the first expectation of night

but not (in this reader's opinion) nearly often enough. The result is that the poet's reactions read like intellectual ones. Though the inspiration is usually some natural object, the general atmosphere is somehow indoor ; the poet has a knack, sometimes deliberate perhaps, of urbanising with his " lunch-hour gale," " red-knee'd cycling couples," " the flattened, huge and butter-yellow moon.' The rhythms are often indescribably flat, and yet there are poems like those on John Clare and David Hume which, springing from some deeper sympathy, give up their treasure to the reader. What is puzzling is the difference between the quality of such poems as, for instance, " The Mind Tied to the Body " and " The I.' " I find Mr. Grigson least palatable in his most Audenesque moods. Effective satire is dependent on rhythm, and it is in rhythm that Mr. Grigson is weak.

Mr. Campbell, on the contrary, is particularly strong in this very quality. Compare, for instance, Grigson's: A councillor mutters his speech In a bilious, uneasy dream, And out on the enormous aerodrome

Waves, at intervals, a warning beam.

with Campbell's: —who knows but that you hear The fight-talk of some paunchy profiteer, Who broadcasts, dropping aitches for applause, And froths " We workers " from his working jaws. . . .

Mr. Campbell is a natural satirist. He has the advantage of being—if by blood a Scot—by upbringing a South African. He has vitality, energy, coarseness, relish and youth, and none of the atrophying conventionality, the prudery, the self-consciousness, the timid, sophistication of twentieth-century English satirists. The Campbells have always enjoyed making enemies, and Mr. Campbell practises his traditional ancestral sport with enthusiasm. He has a good literary tradition behind him, too—the Scottish Chaucerians, Pope, Byron, Kipling among them. He attacks his enemies where they are weakesi. There is hard-hitting well below the belt, and the attacks are bitter, personal and as offensive as the author can make them. The victims need have no scruples about a counter- attack, and in this squeamish age of mutual encouragement the reader may hope for more fun. Mr. Campbell was himself attacked for taking Franco's side in the Spanish Civil War. He fought with his friends for the side he believed to be right. It was never the popular side in this country, and we have heard far too much of Franco and the Right in Spain ever to be convinced of the justice of their cause. But in this country—and it is about the last country of which it is still true and of most it never has been— opinion is free. We do not even yet sufficiently realise how in- tolerable life is where armed men either legally or illegally can march their fellow-men off at the point of a gun for a mere ex- pression of opinion. But Mr. Campbell's belief lies in Catholic Christianity rather than the political Right as such: We all become the thing we fight Till differing solely in the palms And fists that semaphore (to Right Or Left) their imbecile salaams.

And his specific enemy is not the Left as such, but the bureau- crats of either party and, in particular, the Left-wing intellectuals, whom he satirises in the composite character of MacSpaunday. The attack he launches in the title poem of the book makes Pope's attack on Sporus positively kind! Mr. Campbell is a brilliant versifier, and he handles rhyme and rhythm with the greatest ease. His use of language is bold, unconventional and entirely successful. Though his favourite form is rhymed couplets, he uses many com- plicated stanza forms, as in "The Hoopoe " and in the translation of a poem of St. John of the Cross, which is one of the finest poems in the book. Not all the poems are satirical, though most have at least an element of satire in them. The one element in these poems one could do without is the reiterated self-justification. Mr. Campbell, at any rate, never has any difficulty in communicating his sensations.

The transition from Roy Campbell to Edwin Muir is a transi-

tion from raw spirit to junket—cool, soothing and digestible. The prevailing sensation is quiet almost to stagnation. The metres are equally quiet—even humdrum—and it is in dealing with mild, humdrum scenes that the poems are most successful, as in " Suburban Dream."

You wander through a cool elysium

Of women, schoolgirls, children, garden talks, With a schoolboy here and there Conning his history book.

Where Mr. Muir employs a Blakian simplicity one looks for a Blakian profundity, but it is not there. Mild, scholarly and gentle, the poems will be read by many with real pleasure, and when, as happens occasionally, in a poem such as " The Rider Victory," imagination has played a part and sensation is communicated, the pleasure will be heightened to enjoyment.

Henry Reed's first book—A Map of Verona—provides (I can only say for me) a great deal of enjoyment. Here is a young poet. All sensation if you like ; but sensation springing from imagination with the true poet's gift of making the real imaginary. It is highly romantic, young poetry, but written by someone with an ear and a self-indulgent appreciation of words and their musical and evoca- tive power. At present the obvious influence is T. S. Eliot, but

Mr. Reed has a strong enough original talent to assimilate in time