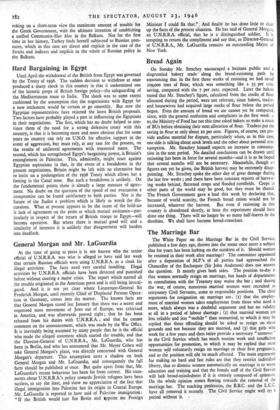 The White Paper on the Marriage Bar in the Civil Service, published a few days ago, throws into the arena once more a subject that for years has been lurking on the outskirts of it. Should women be retained in their work after marriage? The committee appointed after a deputation of M.P.'s of all parties had approached the Chancellor of the Exchequer (Sir John Anderson) does not answer the question. It merely gives both sides. The position to-day is that women normally resign on marriage, but heads of departments in consultation with the Treasury may waive the bar ; and during the war, of course, numerous married women were recruited as temporary Civil Servants, some to responsible positions. The chief arguments for resignation on marriage are ; (t) that the employ- ment of married women takes employment from those who need it more, which always was a doubtful argument and has no validity at all in a period of labour shortage ; (2) that married women are less reliable and less " mobile " than unmarried, to which it may be replied that those offending should be asked to resign on those grounds and not because they are married, and (3) that girls who work for a few years and then retire provide a necessary '1-turnover " in the Civil Service which has much routine work and insufficient opportunities for promotion, to which it may be replied that most women will voluntarily resign on marriage or their first pregnancy, and so the position will nbt be much affected. The main arguments for making no hard and fast rules are that they restrict individual liberty, that to dismiss women automatically on marriage is to waste education and training and that the female staff of the Civil Service will lack broad-mindedness if it is entirely composed of spinsters. On the whole opinion seems flowing towards the removal of the marriage bar. The teaching profession, the B.B.C. and the L.C.C. have all removed it recently. The Civil Service might well try a period without it. -