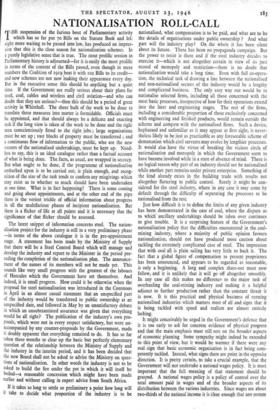 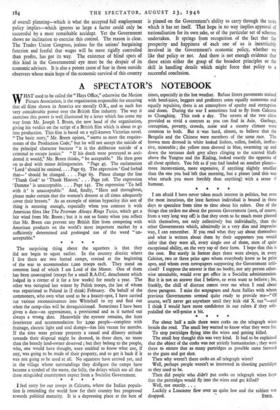 THE suspension of the furious bout of Parliamentary activity which has so far put 70 Bills on the Statute Book and lac eight more waiting to be passed into law, has produced an impres- sion that this is the close season for nationalisation schemes. In a purely legislative sense that is true. The most prolific session in Parliamentary history is adjourned—for it is easily the most prolific in terms of the content of the Bills passed, even though in mere numbers the Coalition of 1919 beat it with 102 Bills to its credit— and new schemes are not now making their appearance every day. But in the executive sense this should be anything but a quiet time. If the Government are really serious about their plans for steel, coal, cables and wireless and civil aviation—and who can doubt that they are serious?—then this should be a period of great activity in Whitehall. The sheer bulk of the work to be done to translate these measures into matter is formidable. Officials must be appointed, and that should always be a delicate and exacting task if the long view is taken of the work to be done and the right men conscientiously fitted to the right jobs ; large organisations must be set up ; vast blocks of property must be transferred ; and a continuous flow of information to the public, who are the new owners of the nationalised undertakings, must be kept up. Need- less to say, this is an ideal catalogue rather than a factual account of what is being done. The facts, as usual, are wrapped in secrecy. But what ought to be done, if the programme of nationalisation embarked upon is to be carried out, is plain enough, and recog- nition of the size of the task tends to confirm any misgivings whicn may exist as to whether so much should have been undertaken at one time. What is in fact happening? There is some coming and going about appointments, and at the other end of the pipe there is the veriest trickle of official information about progress in all the multifarious phases of incipient nationalisation. But there is a flicker of life at all points and it is necessary that the significance of that flicker should be assessed.

The latest snippet of information concerns steel. The nation- alisation project for the industry is still in a very preliminary phase —in terms of the above catalogue it is in the pre-appointment stage. A statement has been made by the Ministry of Supply that there will be a Steel Control Board which will manage and develop the industry and report to the Minister in the period pre- ceding the completion of the nationalisation plan. The announce- ment of the names of its members will not be made yet. This sounds like very small progress with the greatest of the labours of Hercules which the Government have set themselves. And indeed, it is small progress. How could it be otherwise when the proposal for steel nationalisation was introduced in the Commons in April in an almost casual statement that an unspecified part of the industry would be transferred to public ownership at an unspecified date, and followed in May by an unsatisfactory debate in which an unsubstantiated assurance was given that everything would be all right? The publication of the industry's own pro- posals, which were not in every respect satisfactory, but were un- accompanied by any counter-proposals by the Government, made it doubly apparent that everything remained to do. It has so far taken three months to clear up the basic but perfectly elementary question of the relationship between the Ministry of Supply and the industry in the interim period, and it has been decided that the new Board shall not be asked to advise the Ministry on ques- tions of nationalisation. In other words the industry is not to be asked to build the fire under the pot in which it will itself be boiled—a reasonable concession which might have been made earlier and without calling in expert advice from South Africa.

If it takes so long to settle so preliminary a point how long will it take to decide what proportion of the industry is to be nationalised, what compensation is to be paid, and what are to be the details of organisations under public ownership ? And what part will the industry play? On the whole it has been silent about its future. There has been no propaganda campaign. But the power to resist is there and if the steel industry decides to exercise it—which is not altogether certain in view of its past record of monopoly and restriction—there is no doubt that nationalisation would take a long time. Even with full co-opera- tion, the technical task of drawing a line between the nationalised and non-nationalised sectors of the industry would be a lengthy and complicated business. The only easy way out would be to nationalise selected firms, including all those concerned with the most basic processes, irrespective of how far their operations extend into the later and engineering stages. The rest of the firms, including a considerable proportion of those exclusively concerned with engineering and finished products, would remain outside the scheme and compete with the nationalised firms. Such a device, haphazard and unfamiliar as it may appear at first sight, is never- theless likely to be just as practicable as any foreseeable scheme of demarcation which civil servants may evolve by lengthier processes. It would also have the virtue of breaking the vicious circle of nationalisation and monopoly in which the Government seem to have become involved while in a state of absence of mind. There is no logical reason why part of an industry should not be nationalised while another part remains under private enterprise. Something of the kind already exists in the building trade with results not altogether flattering to public control. Surely it might be con- sidered for the steel industry, where in any case it may come by default through the difficulty of separating the processes to be nationalised from the rest.

Just how difficult it is to define the limits of any given industry has been. demonstrated in the case of coal, where the dispute as to which ancillary undertakings should be taken over continues to give trouble. It is a surprising feature of the Government's nationalisation policy that the difficulties encountered in the coal- mining industry, where a majority of public opinion favours nationalisation, should not have produced more caution about tackling the extremely complicated case of steel. The impression that with coal all is plain sailing has very little to back it. The fact that a global figure of compensation to present proprietors has been announced, and appears to be regarded as reasonable, is only a beginning. A long and complex share-out must now follow, and it is unlikely that it will go off altogether smoothly. In any case all this makes no difference to the major task of overhauling the coal-mining industry and making it a helpful adjunct to further production rather than the constant threat it is now. It is this practical and physical business of running nationalised industries which matters most of all and signs that it is being tackled with speed and realism are almost entirely lacking.

It might conceivably be urged in the Government's defence that it is too early to ask for concrete evidence of physical progress and that the main emphasis must still rest on the broader aspects of economic planning Some sympathy might indeed be extended to this point of view, but it would be warmer if there were any real -sign that basic economic organisation is in fact being com- petently •tackled. Instead, what signs there are point in the opposite direction. It is pretty certain, to take a crucial example, that the Government will not undertake a national wages policy. It is most important that the full meaning of that statement should be grasped. A national wages policy is a policy of control over the total amount paid in wages and of the broader aspects of its distribution between the various industries. Since wages are about two-thirds of the national income it is dear enough that any system of overall planning—which is what the accepted full employment policy implies—which ignores so large a factor could only be successful by a most remarkable accident. Yet the Government shows no inclination to exercise this control. The reason is clear. The Trades Union Congress, jealous for the unions' bargaining function and fearful that wages will be more rigidly controlled than profits, has got its way. The existence of blind spots of this kind in the Governmental eye must be the despair of its economic advisers. It is also a potent cause of fear in those outside observers whose main hope of the economic survival of this country is pinned on the Government's ability to carry through the tasks which it has set itself. That hope in no way implies approval of nationalisation for its own sake, or of the particular set of schemes undertaken. It springs from recognition of the fact that the prosperity and happiness of each one of us is inextricably involved in the Government's economic policy, whether we like that policy or not. And there is not enough evidence that there exists either the grasp of the broadest principles or the skill in handling details which might force that policy to a successful conclusion.