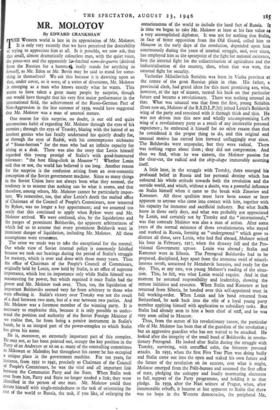 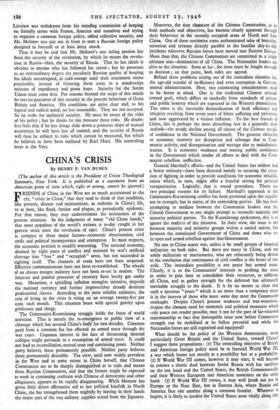 THE Western world is late in its appreciation of Mr. Molotov. It is only very recently that we have perceived the desirability of trying to appreciate him at all. Is it possible, we now ask, that this small, almost dramatically colourless man, with the quiet voice, the pince-nez and the apparently far-fetched nom-de-guerre (derived from the Russian for a hamm,4 really stands for anything in himself, as Mr. Eden or Mr. Bevin may be said to stand for some- thing in themselves? We ask this because it is dawning upon us that, under cover, as it were, of a series of diversions, Mr. Molotov is emerging as a man who knows exactly what he wants. This seems to have taken a great many people by surprise, though one would have thought that his very first major performance in the international field, the achievement of the Russo-German Pact of Non-Aggression in the late summer of 1939, would have suggested that Mr. Molotov was a man of unusual stature.

One reason for this surprise, no doubt, is our old and quite unconscious habit of regarding Mr. Molotov through the eyes of his enemies ; through the eyes of Trotsky, blazing with the hatred of an insolent genius who has fatally underrated his quietly deadly foe, or through the eyes of Radek, with his contemptuous nickname of " Stone-bottom " for the man who had an infinite capacity for sitting at a desk. There was also the story that Lenin himself regarded this young protégé of Stalin's with good-humoured tolerance: " the best filing-clerk in Moscow "! Whether Lenin said that or not, the world has believed it too long. Another reason for the surprise is the confusion arising from an over-romantic conception of the Soviet government machine. Since so many things in the Soviet Union have not always been what they seemed, the tendency is to assume that nothing can be what it seems, and that therefore, among others, Mr. Molotov cannot be particularly impor- tant. We remember, too, that after Lenin's death the exalted office of Chairman of the Council of People's Commissars, now tenanted by Rykov, was no longer a key appointment; and we assumed too easily that this continued to apply when Rykov went and Mr. Molotov arrived. We were confused, also, by the liquidations and the purges of prominent Bolsheviks, the apparent arbitrariness of which led us to assume that every prominent Bolshevik went in imminent danger of liquidation, including Mr. Molotov. All these assumptions were erroneous.

The error we made was to take the exceptional for the normal. Our whole view of Soviet internal policy is commonly falsified because we took our bearings during the period of Stalin's struggle for mastery, which is over and done with these many years. Thus the office of Chairman of the People's Council of Commissars, originally held by Lenin, now held by Stalin, is an office of supreme importance, which lost its importance only while Stalin himself was manoeuvring for power, but which regained it once Stalin had the power and Mr. Molotov took over. Thus, too, the liquidation of important Bolsheviks seemed very far from arbitrary to those who were effecting it. Stalin's victory over Trotsky was not the result of a duel between two men, but of a war between two parties. And Mr. Molotov was a foremost member of the winning party. It is necessary to emphasise this, because it is only possible to under- stand the position and authority of the Soviet Foreign Minister if we realise that, far from being a passive instrument in Stalin's hands, he is an integral part of the power-complex to which Stalin has given his name.

He is, moreover, an extremely important part of this complex. He may not, as has been pointed out, occupy the key position in the Party of an Andreyev or sit on a3 many of the controlling committees as Mikowan or Malenko; but throughout his career he has occupied a unique place in the government machine. For ten years, for instance, from 1931 to 1941, precisely as Chairman of the Council of People's Commissars, he was the vital and all important link between the Communist Party and the State. When Stalin took over from him, Party and State no longer needed a link; they were identified in the person of one man. Mr. Molotov could then devote himself with single-mindedness to the task of orientating the rest of the world to Russia, the task, if you like, of enlarging the

consciousness of the world to include the hard fact of Russia. II is time we began to take Mr. Molotov at least at his face value

a very accomplished diplomat. It was not for nothing that Stalin, in face of bitter opposition from the Old Guard, called him to Moscow in the early days of the revolution, depended upon him continuously during the years of internal struggle, and, ever since, has employed him as the spearpoint of the fight for national existence, first the internal fight for the collectivisation of agriculture and the industrialisation of the country, then, when that was won, the external fight for security.

Vacheslav Mihailovitch Scriabin was born in Viatka province at the centre of the great Russian plain in 1890. His father, a provincial clerk, had grand ideas for this most promising son, who, however, at the age of sixteen, turned his back on that particular future and became a revolutionary. There was nothing unusual in that. What was unusual was that from the first, young Scriabin (from now on, Molotov of the R.S.D.L.P.(b)) joined Lenin's Bolshevik wing of the parry and remained with it through thick and thin. Ho was not driven into this new and wholly uncompromising Left wing of a revolutionary party as a result of any intolerable personal experience ; he embraced it himself for no other reason than that he considered it the proper thing to do, and this original and unusual motive has carried him forward unflaggingly ever since. The Bolsheviks were unpopular, but they were radical. Thera was nothing vague about them ; they did not compromise. And thus we find, when he was sixteen, the Molotov passion for the clear-cut, the radical and the ship-shape immovably asserting itself.

A little later, in the struggle with Trotsky, there emerged his profound belief in Russia and her personal destiny which has coloured his whole attitude towards both the revolution and the outside world, and which, without a doubt, was a powerful influence on Stalin himself when it came to the break with Zinoviev and Kamenev. All these qualities must have been sooner or later apparent to anyone who came into contact with him, together with his capacity for immense and sacrificial industry. But what Stalin knew in those early days, and what was probably not appreciated by Lenin, and certainly not by Trotsky and the " internationals," was that comrade Molotov was also a man of action. After some years of the normal existence of those revolutionaries who stayed and worked in Russia, forming an " underground " which grew to distrust all those, save Lenin, who had fled abroad, Molotov seized his hour in February, 1917, when the dynasty fell and the Pro- visional Government uprose. Lenin was abroad ; Stalin and Kamenev were in Siberia. The Petrograd Bolsheviks had to be prepared, disciplined, kept apart from the immense swirl of miscel- laneous revolt, untainted by Menshevik heresies, and ready for the day. This, at any rate, was young Molotov's reading of the situa- tion. This, he felt, was what Lenin would require. And in that moment he assumed responsibility and leadership, showing the utmost initiative and resource. When Stalin and Kamenev at last returned from Siberia, he handed over this self-appointed trust in full working-order. When Lenin and his band returned from Switzerland, he sank back into the role of a loyal young party member applying himself with application to subsidiary tasks. But Stalin had already seen in him a born chief of staff, and he was very soon called to Moscow.

Thus, from the outset of his revolutionary career, the particular role of Mr. Molotov has been that of the guardian of the revolution ; but an aggressive guardian who has not waited to be attacked. He looked after the integrity of the small band of Bolsheviks in revolu- tionary Petrograd. He looked after Stalin during the struggle with Trotsky, surviving, with unruffled calm, the bitterest personal attacks. In 1931, when the first Five Year Plan was doing badly and Stalin came out into the open and staked his own future and the future of the revolution on its success, cost what it might, Molotov emerged from the Polit-bureau and assumed the first office of state, pledging the unhappy and loudly murmuring electorate to full , support of the Party programme, and holding it to that pledge. In 1939, after the Nazi seizure of Prague, when, after

innumerable rebuffs, it became at last apparent to Stalin that there was no hope in the Western democracies, the peripheral Mr,

-Litvinov was withdrawn from his standing commission of keeping on friendly terms with France, America and ourselves and trying to organise a common foreign policy, called collective security, and Mr. Molotov was put out in front to start a Russian foreign policy designed to forestall or at least delay attack.

Thus it may be said that Mr. Molotov's one ruling passion has been the security of the revolution, by which he means the revolu- tion in Russia—thus, the security of Russia. That he has ideals is obvious to anyone who has followed his career ; but he possesses to an extraordinary degree the peculiarly Russian quality of keeping his ideals uncorrupted, in cold-storage until their attainment seems practicable, instead of frittering them away in a nondescript mixture of expediency and pious hope. Security for the Soviet Union must come first. For reasons beyond the scope of this article he sees no guarantee of this security in the present behaviour of Great Britain and America. His conditions are quite clear and, to his logical and radical mind, no less reasonable. They are not accepted. So he seeks for unilateral security. He must be aware of the risks of his policy ; but he thinks he can measure those risks. He doubt- less feels that if he lets things slide down a primrose slope of mutual assurances he will have lost all control, and the security of Russia will then be subject to risks which cannot be measured, but which he believes to have been outlined by Karl Marx. His controlling lever is the Veto.