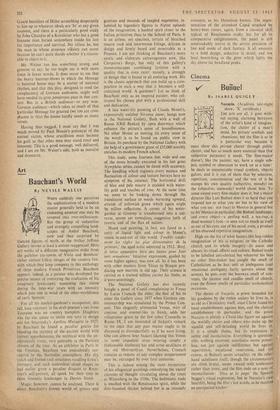 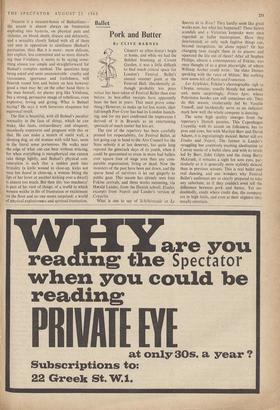 Nazarin. (Academy late-night show; 'X' certificate.) THE arts are all, it goes with- out saying, alarming betrayers of the artist's kind of imagina- tion, the clutter of a man's mind, his private symbols and obsessions, but the film is so in a particular way because it must show this private clutter through public clutter, and has so much more material than (for subjective purposes) it needs. The film-maker doesn't, like the painter, say, have a single sub- ject, symbol or obsession to work on at a time: he deals in innumerable visual synibols, objects galore, and it is out of them that by selection, repetition, concentration and the rest of it he stamps his own quality (subjective, moody) on the (objective, unmoody) world about him. To some extent every film-maker does it; but a major director like Luis Buituel does it so hard that you respond not to what you see but to his view of what you see : not (say) to Mexico in general but to hiS Mexico in particular, the Bunuel landscape; and every object—a peeling wall, a tea-tup,. a dead woman's foot—is seen not so much as itself as out of his eyes, out of his mind, even, a product of his obsessed repetitive imagirration.

High on the list of what haunts this hag-ridden imagination of his is religion; or the Catholic church and its whole imagery—its auras and abuses, its ritual, effects and culture. Butluel tends to be labelled anti-clerical but whatever his bias no other film-maker has caught the smell of Catholicism as he has; anti or ambiguous (and emotional ambiguity fairly quivers about the screen), he puts over the beeswax smell of con- vents, the incense and candles smell of church, even the flower smells of particular ecclesiastical occasions.

The theme of Nazarin, a priest hounded for his goodness by the rotten society he lives in, is, as old as Christianity itself, since Christ found his' local establishment against him, and the clerical establishment in particular, and the priest Nazario is plainly a Christ-like figure set against the worldly clerics and others who make up the squalid and self-deluding world he lives in. It is a simple theme, but its expression is subtle and inconclusive. Everything is question- able, nothing resolved; saintliness seems power- less, not just against indifference but against superstition, misplaced veneration, and (of coarse, in Butiuel) secret sexuality; on the other hand saintliness itself, though the circumstances are often brutal, seems viewed with tenderness rather than irony, and the film ends on a note of reconciliation : 'Dios se lo pap,' the Spanish beggar's ritual expression, but in Nazario's case heartfelt, being the film's last words, as he receives an unexpected kindne,

Nazarin is a treasure-house of Butiuelisms- the accent is almost always on frustration exploding into hysteria, on physical pain and violence, on blood, death, disease and deformity, and a sexuality closely linked with all of them and seen in opposition to saintliness (Bufluel's puritanism, this). But it is more : more delicate, less explicit, less committed and so more disturb- ing than Viridiana, it seems to be saying some- thing almost too simple and straightforward for Buituel's complex method. The questions keep being asked and seem unanswerable : cruelty and viciousness, ignorance and foolishness, will flourish round him and batten on him however good a man may be; on the other hand there is the man himself, no plaster prig like Viridiana, but a strong, persuasive image of rebellious, even explosive, loving• and giving. What is Buliuel saying? He says it with ferocious eloquence but equivocal result.

The film is beautiful, with all Builuel's peculiar sensuality in the face of things, which he can make, like faces, extraordinary and eloquent, ceaselessly expregsive and pregnant with this or that. He can make a stretch of sunlit wall, a sleeping dog, an old woman with wild hair, seem in the literal sense portentous. He walks near the edge of what one can bear without wincing, for when everything is metaphorical one cannot take things lightly, and Builuel's physical con- centration is such that a sudden push into brutality (a knife wound in close-up, kicks not seen but heard in' close-up, a woman biting the lips of her'lover or another kicking over a dwarf) is almost too much. But then this `too muchness' is part of his view of things, of a world in which Women writhe in fits of frustration or excitement on the floor and no one seems surprised; a world of physical explosiveness and spiritual frustration.