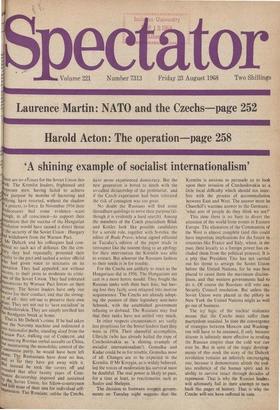 `A shining example of socialist internationalism'

here are no excuses for the Soviet Union this eek. The Kremlin leaders, frightened and Perate men, having failed to achieve eir purpose by months of hectoring and 'lying, have resorted, without the shadow P a pretext, to force. In November 1956 their redecessors had some evidence— scant tough, in all conscience—to support their intention that the success of the Hungarian evolution would have caused a direct threat 0 the security of the Soviet Union : Hungary 4d withdrawn from the Warsaw Pact.

Dubcek and his colleagues had coin- fitted no such act of defiance. On the con- ary they had repeatedly protested their °Yalty to the pact and sacked a senior official ho had given voice to strictures on its Peration. They had appealed, not without cess, to their press to moderate its critic- Ins of the Soviet Union. They had tolerated anoeuvres by Warsaw Pact forces on their rritory. The Soviet leaders have only one illotive for their conduct, and that the strong- est of all: they are out to preserve their own kins. They are not out to 'save socialism' in „zechoslovakia. They are simply terrified lest the floodgates break at home. That is Mr Dubcek's crime. If he had taken vet the Novotny machine and redirected it to nationalist paths, standing aloof from the arsaw Pact, stalking out of Comecon, and denouncing Russian verbal assaults on China, but maintaining the monolithic control of the alone mmunist party, he would have been left TI;' Rumanians have done no less, 8d so tar they have got away with it. It instead he took the covers off and vealed that after twenty years of Com- nlist dictatorship imposed and sustained the Soviet Union, his fellow-countrymen ,_tuta lost none of their zest for individual self- vtPression. The Russians, unlike the Czechs, have never experienced democracy. But the new generation is bored to death with the so-called dictatorship of the proletariat, and if the Czech experiment had been tolerated the risk of contagion was too great.

No doubt the Russians will find some threadbare quislings to serve their purpose (al- though it is evidently a hard search). Among the members of the Czech praesidium Bilak and Kolder look like possible candidates for a servile role, together with Svestka. the editor of Rude Pravo, whose signed editorial in Tuesday's edition of the paper reads in retrospect like the nearest thing to an apology for their intervention the Kremlin was able to extract. But whoever the Russians fashion to their needs is in for trouble.

For the Czechs are unlikely to react as the Hungarians did in 1956. The Hungarians are cast in a more heroic mould. They fought the Russian tanks with their bare fists: but hav- ing lost they fairly soon relapsed into morose acquiescence. The Czechs are already adopt- ing the posture of their legendary anti-hero Schweik, with the established government refusing to disband. The Russians may find that their tanks have not settled very much.

In other respects circumstances are vastly less propitious for the Soviet leaders than they were in 1956. Their shameful accomplices, Ulbricht (who has already hailed the rape of Czechoslovakia as 'a shining example of socialist internationalism'), Gomulka and Kadar could be in for trouble, Gomulka most of all. Changes are to be expected in the Kremlin. If Mr Kosygin, as is widely believed, led the voices of moderation his survival must be doubtful. The real power is likely to pass, for a time at least, to reactionaries such as Suslov and Shelepin.

The decision to forewarn western govern- ments on Tuesday night suggests that the Kremlin is anxious to persuade us to look upon their invasion of Czechoslovakia as a little local difficulty which should not inter- fere with the process of accommodation between East and West. The answer must be Churchill's wartime answer to the Germans `what sort of people do they think we are?'

This time there is no Suez to divert the attention of the world from events in Eastern Europe. The alienation of the Communists of the West is almost complete (and this could have important implications for the future in countries like France and Italy, where, in the past, their loyalty to a foreign power has ex- cluded them from the political process). It is a pity that President Tito has not carried out his threat to arraign the Soviet Union before the United Nations, for he was best placed to cause them the maximum discom- fiture, and that western governments had to do it. Of course the Russians will veto any Security Council resolution. But unless the Soviet Union were placed in the pillory in New York the United Nations might as well go out of business.

The icy" logic of the nuclear stalemate means that the Czechs must suffer their martyrdom unaided. In time the convergence of strategies between Moscow and Washing- ton will have to be resumed, if only because detente is infinitely more effective in eroding the Russian empire than the cold war can ever be. But in spite of the tragic develop- ments of this week the story of the Dubcek revolution remains an infinitely encouraging one, because it demonstrates afresh the end- less resilience of the human spirit and its ability to survive intact through decades of repression. That is why the Russian leaders will ultimately fail in their attempt to turn back the pages of history. That is why the Czechs will not have suffered in vain.