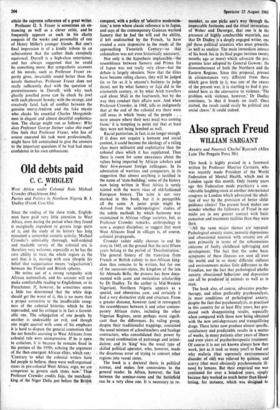 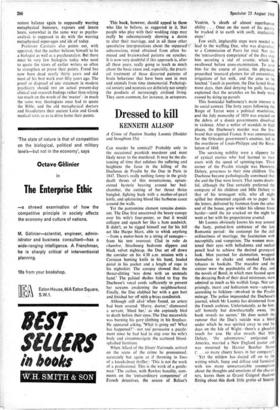 This book is- highly praised in a fore*ord written by Professor Maurice Carstairs, who Was recently made President of the World Federation of Mental Health, which met in London again this month. Only twenty years ago this- Federation Made pqchiatry a con- siderable laughing-stock at another international congress in London which advoeated the aboli- tion of war by the provision of better child- guidance clinics! The present bdok Makes one Wonder whether the followers of Freud in -our midst are in any greater contact with basic causation and treatment realities than. they were then.

--All the same major themes are repeated. PathOlOgical anxiety states, neurotic depressions and obsessional neurosis with anxiety are all seen primarily. in terms of the subconscious outcome of faulty childhood upbringing and development. The fait that the same basic symptoms of these illnesses are seen all over the world and in so many different cultures and environments makes little difference to the Freudian, nor the fact that pathological phobic anxiety, obseisional behaviour and depression

can all be produced in animals as well as in • man.

The book also, of course, advocates psycho- therapy, and often preferably psychoanalysis, in most conditions of pathological. anxiety, despite the fact that psychoanalysis, as practised in this country for at least fifty years, has pro- duced such disappointing results, especially when compared with those now being obtained with the new anti-depressant and tranquillising drugs. These latter now produce almost specific, satisfactory and predictable results in a matter of weeks, in many patients after years of illness and even years of psychotherapeutic treatment. Of course it is not yet known always how they work, just as it took so many yeati to find out why malaria (that supremely environmental disorder of old) was relieved by quinine, and scurvy (that most obviously psychosomatic ill- ness) by lemons. But their empirical use was continued for over a _hundred years, simply because they worked so much better than blood- letting, for instance, which was designed to restore balance again to supposedly warring metaphysical humours, vapours and innate heats, somewhat in the same way as psycho- analysis is supposed to do with the warring metaphysical super-egos and ids of today.

Professor Carstairs also points out, with approval, that the author believes himself to be a biologist as well as a psychoanalyst. But there must be very few biologists today who need to quote the views of earlier writers so often to strengthen or prove their points. Freud has now been dead nearly thirty years and did most of his best work over fifty years ago. The proof or disproof of any statement in modern psychiatry should rest on actual present-day clinical and research findings rather than relying too much on the words of the 'master': in much the same way theologians once had to quote the Bible, and the old metaphysical doctors and bloodletters their ancient Latin and Greek medical texts so as to drive home their points. This book, however, should appeal to those who like to believe, as suggested in it, 'That people who play with their wedding rings may really be subconsciously showing a desire to alter their marriage, and in all those other speculative interpretations about the supposed`t subconscious mind obtained from often be- mused and brainwashed patients on couches. It is now very doubtful if this approach is, after all these years, really going to teach us much about the basic cause and, especially, the practi- cal treatment of those distorted pattepis of brain behaviour that have been seen in men and animals from time immemorial. Pathologi- cal anxiety and neurosis are definitely not simply the products of increasingly civilised living. They seem common, for instance, in octopuses.