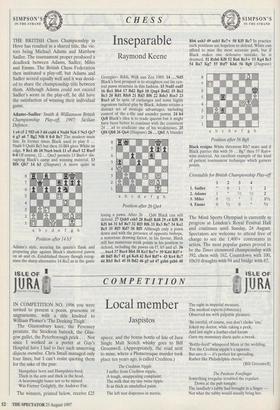 THE BRITISH Chess Championship in Hove has resulted in a shared title, the vic- tors being Michael Adams and Matthew Sadler. The tournament proper produced a deadlock between Adams, Sadler, Miles and Emms. The British Chess Federation then instituted a play-off, but Adams and Sadler scored equally well and it was decid- ed to share the championship title between them. Although Adams could not exceed Sadler's score in the play-off, he did have the satisfaction of winning their individual game.

Adams's style, securing his queen's flank and preparing play against Black's shattered pawns on a6 and c6. Established theory though recog- nises the sharp alternative 14 Re2 as in the game

Rb6 axb3 49 axb3 Re7+ 50 Kf5 Rc7 In practice such positions are hopeless to defend. White can afford to miss the most accurate path, but if Black makes one defensive mistake, he is doomed. 51 Rxh6 Kf8 52 Ra6 RcS+ 53 Kg4 Bc3 54 Raj Kg7 55 BxI7 Kh6 56 Bg8 (Diagram) Position after 56 Bg8 Black resigns White threatens Rh7 mate and if Black parries this with 56 Bg7 then 57 Ra6+ wins material. An excellent example of the kind of patient tournament technique which garners points.

1/2 The Mind Sports Olympiad is currently in progress at London's Royal Festival Hall and continues until Sunday, 24 August. Spectators are welcome to attend free of charge to see the 1,400+ contestants in action. The most popular games proved to be the Times crossword championship with 392, chess with 162, Countdown with 100, 10x10 draughts with 94 and bridge with 87.