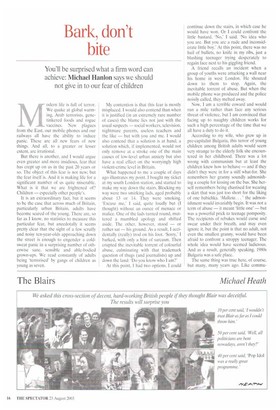 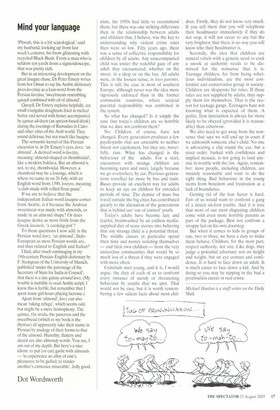 You'll be surprised what a firm word can achieve: Michael Hanlon says we should not give in to our fear of children Modern life is full of terror. We quake at global warming, Arab terrorists, genetinkered foods and rogue vaccines. New plagues from the East, our mobile phones and our railways all have the ability to induce panic. These are all new fears of new things. And all, to a greater or lesser extent, are irrational.

But there is another, and I would argue even greater and more insidious, fear that has crept up on us in the past 20 years or so. The object of this fear is not new; but the fear itself is. And it is making life for a significant number of us quite miserable. What is it that we are frightened of? Children — especially other people's.

It is an extraordinary fact, but it seems to be the case that across much of Britain, particularly urban Britain, adults have become scared of the young. There are, so far as I know, no statistics to measure this particular fear, but anecdotally it seems pretty clear that the sight of a few scruffy and noisy ten-year-olds approaching down the street is enough to engender a coldsweat panic in a surprising number of otherwise sane, sensible and able-bodied grown-ups. We read constantly of adults being 'terrorised' by gangs of children as young as seven.

My contention is that this fear is mostly misplaced. I would also contend than when it is justified (in an extremely rare number of cases) the blame lies not just with the usual suspects — social workers, television, nightmare parents, useless teachers and the like — but with you and me. I would also contend that a solution is at hand; a solution which, if implemented, would not only remove at a stroke one of the main causes of low-level urban anxiety but also have a real effect on the worryingly high violent-crime level in Britain.

What happened to me a couple of days ago illustrates my point. I bought my ticket at my south London station, and started to make my way down the stairs. Blocking my way were two smirking lads, aged probably about 13 or 14. They were smoking. 'Excuse me, I said, quite loudly but (I thought) without an ounce of menace or malice. One of the lads turned round, muttered a mumbled apology and shifted aside. The other, however, stood — or rather sat — his ground. As a result, I accidentally (really) trod on his foot. 'Sorry,' I barked, with only a hint of sarcasm. Then erupted the inevitable torrent of colourful abuse, culminating with that trademark question of thugs (and journalists) up and down the land: 'Do you know who I am?'

At this point, I had two options. I could continue down the stairs, in which case he would have won. Or I could confront the little bastard. 'No,' I said. No idea who you are. But you are a rude and inconsiderate little boy.' At this point, there was no hail of bullets, no knife in my ribs, just a blushing teenager trying desperately to regain face next to his giggling friend.

A friend recalls an incident when a group of youths were attacking a wall near his home in west London. He shouted down to them to stop. Again, the inevitable torrent of abuse. But when the mobile phone was produced and the police noisily called, they melted away.

Now, I am a terrible coward and would run a mile rather than face any serious threat of violence, but I am convinced that facing up to naughty children works for such a high percentage of the time that we all have a duty to do it.

According to my wife, who grew up in pre-capitalist Bulgaria, this terror of young children among British adults would seem very strange to the elderly folk she encountered in her childhood. There was a lot wrong with communism but at least the children knew how to behave — and if they didn't they were in for a stiff what-for. She remembers her granny soundly admonishing a couple for kissing on the bus. She herself remembers being chastised for wearing a skirt that was just too short for the liking of one babichka. 1/1alketa. ' the admonishment would invariably begin. It was not a term of abuse — it meant 'little one' — but was a powerful prick to teenage pomposity. The recipients of rebukes would curse and swear under their breath, and may even ignore it, but the point is that no adult, not even the smallest granny, would have been afraid to confront a stroppy teenager. The whole idea would have seemed ludicrous. And as a result, generally speaking, 1980s Bulgaria was a safe place.

The same thing was true here, of course, but many, many years ago. Like commu nism, the 1950s had little to recommend them, but there was one striking difference then in the relationship between adults and children that, I believe, was the key to understanding why violent crime rates then were so low. Fifty years ago, there was a sense of collective responsibility for children by all adults. Any unaccompanied child was under the watchful gaze of any adult they encountered, whether on the street, in a shop or on the bus. All adults were, in the loosest sense, in loco parentis. This is still the case in most of southern Europe, although never was the idea more rigorously enforced than in the former communist countries, where societal parental responsibility was enshrined in the system.

So what has changed? Is it simply the case that today's children are so horrible that we dare not confront them?

No. Children, of course, have not changed. Every generation produces a few psychopaths that are amenable to neither threat nor cajolement, but they are, mercifully, rare. What has changed is the behaviour of the adults. For a start, encounters with strange children are becoming rarer and rarer, largely because we go everywhere by car. Previous generations travelled far more by bus and train. Buses provide an excellent way for adults to keep an eye on children for extended periods of time. The demise of mass bus travel outside the big cities has contributed greatly to the alienation of the generations that is behind our 'out of control' youth.

Today's adults have become lazy and fearful, brainwashed by an endless mediasupplied diet of scare stories into believing that any strange child is a potential threat. The middle classes in particular spend their time and money isolating themselves — and their own children — from the very underclass communities that would be so much less of a threat if they were engaged with more often.

Criminals start young, and it is, I would argue, the duty of each of us to confront every instance of unruly or threatening behaviour by youths that we spot. That would not be easy, but it is worth remembering a few salient facts about most chil

Secondly, the idea that children are natural rebels with a genetic need to cock a snook at authority needs to be dismissed for the nonsense that it is. Teenage children, far from being rebellious individualists, are the most conformist and conservative group in society. Children are desperate for rules. If these rules are not supplied by adults, they supply them for themselves. That is the reason for teenage gangs. Teenagers hate not knowing what is expected of them. A polite, firm instruction is always far more likely to be obeyed (provided it is reasonable) than otherwise.

We also need to get away from the nonsense that says we will end up in court if we admonish someone else's child. No one is advocating a clip round the ear, but a stout order, barked with confidence and implied menace, is not going to land anyone in trouble with the law. Again, remember: most people, including children, are innately reasonable and want to do the right thing. Bad behaviour in the young stems from boredom and frustration at a lack of boundaries.

Getting rid of the fear factor is hard. Few of us would want to confront a gang of a dozen six-foot youths. And it is true that most of our most disgusting children come with even more horrible parents as part of the package. Best not confront a stroppy lad on his own doorstep.

But when it comes to kids in groups of one, two or three, we have a duty to make them behave, Children, for the most part, respect authority, not size. Like dogs, they judge a potential adversary not on height and weight, but on eye contact and confidence. It is hard to face down an adult. It is much easier to face down a kid. And by doing so you may be nipping in the bud a promiseless career in real crime.

Michael Hanlon is a staff writer on the Daily Mail.