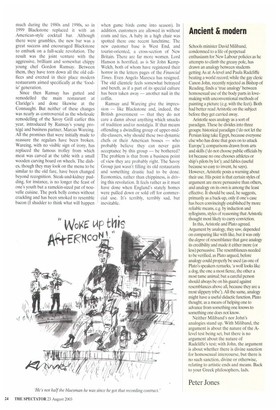 Schools minister David Miliband, condemned to a life of perpetual enthusiasm for New Labour policies as he attempts to climb the greasy pole, has drawn an analogy between students getting As at A-level and Paula Radcliffe beating a world record; while the gay cleric Canon John, recently rejected as Bishop of Reading, finds a 'true analogy' between homosexual use of the body parts in lovemaking with unconventional methods of painting a picture (e.g. with the feet). Both had better read Aristotle on the subject before they get carried away.

Aristotle sees analogy as a sort of paradigm. These he divides into three groups: historical paradigm ('do not let the Persian king take Egypt, because everyone else who has done that goes on to attack Europe'); comparisons drawn from arts and skills ('do not choose public officials by lot because no one chooses athletes or ship's pilots by lot'); and fables (useful because so easy to invent, he says). However, Aristotle posts a warning about their use. His point is that certain styles of argument are more persuasive than others, and analogy on its own is among the least effective. It should be used, he suggests, primarily as a back-up, only if one's case has been convincingly established by more reliable means, e.g. by induction and syllogisms, styles of reasoning that Aristotle thought most likely to cany conviction.

In this, Aristotle and Plato agreed. Argument by analogy, they saw, depended on comparing like with like, but it was only the degree of resemblance that gave analogy its credibility and made it either more (or less) persuasive. The resemblances needed to be verified, as Plato argued, before analogy could properly be used (as one of Plato's speakers remarks, 'a wolf looks like a dog, the one a most fierce, the other a most tame animal; but a careful person should always be on his guard against resemblances above all, because they are a most slippery tribe). All the same, analogy might have a useful didactic function, Plato thought, as a means of helping one to advance from something one knows to something one does not know.

Neither Miliband's nor John's analogies stand up. With Milibancl, the argument is about the nature of the Alevel test being set, but there is no argument about the nature of Radcliffe's test; with John, the argument is about whether there is divine sanction for homosexual intercourse, but there is no such sanction, divine or otherwise, relating to artistic ends and means. Back to your Greek philosophers, lads.