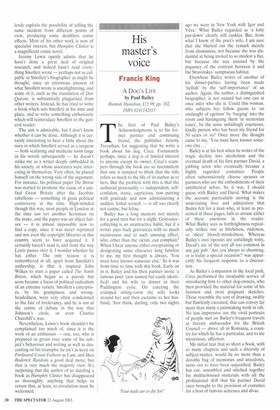 A DOG'S LIFE by Paul Bailey Hatnish Hamilton, £15.99, pp. 182, ISBN 0241142015 The first of Paul Bailey's Acknowledgments is to his former partner and continuing friend, the publisher Jeremy Trevathan, for suggesting that he write a book about his dog, Circe. Fortunately perhaps, since a dog is of limited interest to anyone except its owner, Circe's scampers through the book are so intermittent that one is tempted to think that the title refers as much to the life of its author as to hers. But the problem with this is that the authorial personality — independent, selfconfident, ironic, capricious, now purring with gratitude and now administering a sudden, lethal scratch — is all too clearly not canine, but feline.

Bailey has a long memory not merely for a good turn but for a slight. Grievancecollecting is an unattractive habit; but if a writer pays back grievances with so much incisiveness and to such amusing effect, who, other than the victim, can complain? When I hear anyone either overpraising or denigrating some character long familiar to me, my first thought is always, You must have known someone else.' So it was from time to time with this book. Early on in it, Bailey and his then partner invite 'a famous poet' (not named but easily identified) and his wife to dinner in their Paddington eyrie. On entering the cramped sitting-room the wife looks around her and then exclaims to her husband, 'Just think, darling, only two nights

ago we were in New York with Igor and Vera.' What Bailey regarded as 'a lofty put-down' clearly still rankles. But, from what I know of the poet's wife, I am sure that she blurted out the remark merely from clumsiness, not because she was disdainful at being invited to so modest a flat, but because she was amused by the piquancy of the contrast between it and the Stravinskys' sumptuous habitat.

Elsewhere Bailey writes of another of his dinner-parties having been made 'hellish' by the 'self-importance' of an author. Again, the author, a distinguished biographer, is not named but one can at once infer who she is. Could this woman, who subjects her fellow guests to 'an onslaught of egotism' by 'barging' into the room and haranguing them 'in stentorian tones', be the same unfailingly courteous, kindly person who has been my friend for 50 years or so? Once more the thought came to me, 'You must have known someone else ...'

Bailey is at his best when he writes of the tragic decline into alcoholism and the eventual death of his first partner David, a jobbing actor who eventually became a highly regarded costumier. People often subconsciously choose spouses or partners who are the embodiments of their antithetical selves. So it was, I should guess, with Bailey and David. What makes the account particularly moving is the undeviating love and admiration that Bailey felt for a man who, at least as presented in these pages, fails to arouse either of these emotions in the reader. What Bailey sees as forthrightness repeatedly strikes one as bitchiness, rudeness, or sheer bloody-mindedness. Whereas Bailey's own ripostes are unfailingly witty, David's are of the sort all too common in any gay pub. 'Are you always so charming, or is today a special occasion?' was apparently his frequent response to a discourtesy. As Bailey's companion in the local park, Circe performed the invaluable service of introducing him to other dog-owners, who then provided the material for some of his funniest and most poignant sketches. These resemble the sort of drawing, swiftly but flawlessly executed, that can convey far more than many a painstaking work in oils. No less impressive are the vivid portraits of people met on Bailey's frequent travels as literary ambassador for the British Council — above all in Romania, a country for which he has a particular, and to me mysterious, affection. My initial fear that so short a book, with so many chapters and such a diversity of subject-matter, would be no more than a dorothy bag of memories and anecdotes, turns out to have been unjustified. Bailey has cut, assembled and stitched together his multicoloured materials with all the professional skill that his partner David once brought to the provision of costumes for a host of famous actresses and divas.