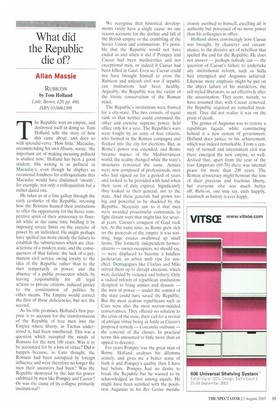 What did the Republic die of?

RUBICON by Tom Holland Little, Brown, £20, pp. 406, ISBN 0316861308 T. he Republic won an empire, and destroyed itself in doing so. Tom Holland tells the story of how this came about, and does so with splendid verve. 'How little.' Macaulay, recommending his own History, wrote, 'the important art of making meaning pellucid is studied now.' Holland has been a good student. His writing is as pellucid as Macaulay's, even though he displays an occasional fondness for colloquialisms that Macaulay would have disdained: 'snooty', for example, not only a colloquialism but a rather dated one.

He takes us at a fine gallop through the early centuries of the Republic, stressing how the Romans framed their institutions to offer the opportunity for the fierce competitive spirit of their aristocracy to flourish while at the same time bridling it by imposing severe limits on the exercise of power by an individual. He might perhaps have spelled out more clearly the failure to establish the substructures which are characteristic of a modern state, and the consequences of that failure: the lack of a permanent civil service owing loyalty to the idea of the Republic rather than to the men temporarily in power; and the absence of a public prosecutor which, by leaving responsibility for all legal actions to private citizens, reduced justice to the continuation of politics by other means. The Empire would correct the first of these deficiencies, but not the second.

As his title promises, Holland's first purpose is to account for the transformation of the Republic of free men into the Empire where liberty, as Tacitus understood it, had been smothered. This was a question which occupied the minds of Romans for the next 100 years. Was it to be accounted for by a loss of virtue? Did it happen because, as Cato thought, the Romans had been corrupted by foreign influence and were therefore no longer the men their ancestors had been? Was the Republic destroyed by the lust for power exhibited by men like Pompey and Caesar? Or was the cause of its collapse primarily institutional?

We recognise that historical developments rarely have a single cause: no one reason accounts for the decline and fall of the British empire or the crumbling of the Soviet Union and communism. It's possible that the Republic would not have ended as and when it did if Pompey and Caesar had been mediocrities and not exceptional men, or indeed if Caesar had been killed in Gaul. Even so, Caesar could not have brought himself to cross the Rubicon and unleash civil war if republican institutions had been healthy. Arguably, the Republic was the victim of the innate conservatism of the Roman mind.

The Republic's institutions were framed for a city-state. The two consuls, of equal rank so that neither could command the other and exercise supreme power, held office only for a year. The Republic's wars were fought by an army of free citizens, who farmed in the Roman campagna and flocked into the city for elections. But, as Rome's power was extended, and Rome became master of the Mediterranean world, the reality changed while the state's structures remained the same. Armies were now composed of professionals, men who had signed on for a period of years and looked to be provided with land when their term of duty expired. Significantly they looked to their general, not to the state. And these generals had grown too big and powerful to be shackled by the Republic. Necessity saw to it that men were awarded proconsular commands, to fight distant wars that might last for several years. Caesar's conquest of Gaul took ten. At the same time. as Rome grew rich on the proceeds of the empire it was winning, huge estates swallowed up small farms. The formerly independent farmercitizens — owner-occupiers, we should say. — were displaced to become a landless proletariat, an urban mob ripe for mischief. Demagogues like Clodius and Milo stirred them up to disrupt elections, which were decided by violence and bribery. Only a radical reform of republican institutions designed to bring armies and dynasts — the men of power — under the control of the state could have saved the Republic. But the most zealous republicans such as Cato were also the most narrow-minded conservatives. They offered no solution to the crisis of the state, their call for a revival of antique virtue being as futile as Cicero's proposed remedy — Concordia ordinum — the concord of the classes, In practical terms this amounted to little more than an appeal to decency.

For years Pompey was the great man of Rome. Holland analyses his dilemma acutely, and gives me a better sense of both it and Pompey's quality than I have had before. Pompey had no desire to break the Republic but he wanted to be acknowledged as first among equals. He might have been satisfied with the positition Augustus in his Res Gestae menda

ciously ascribed to himself, excelling all in authority but possessed of no more power than his colleagues in office.

Holland shows convincingly how Caesar was brought, by character and circumstance, to the decisive act of rebellion that spelled the end for the Republic. He does not answer — perhaps nobody can — the question of Caesar's failure to undertake any institutional reform, such as Sulla had attempted and Augustus achieved. Likewise more emphasis might be put on the abject failure of his murderers, the self-styled liberators, to act effectively after the assassination. They seem, naively, to have assumed that, with Caesar removed. the Republic required no remedial treatment. They did not realise it was on the point of death.

The genius of Augustus was to restore a republican façade, while constructing behind it a new system of government. Holland does justice to his achievement, which was indeed remarkable. From a century of turmoil and intermittent civil war there emerged the new empire, so welldevised that, apart from the year of the four Emperors (69-70) there was internal peace for more than 200 years. The Roman aristocracy might bemoan the loss of their precious and fractious liberty, but everyone else was much better off. Rubicon, one may say, ends happily, inasmuch as history is ever happy.