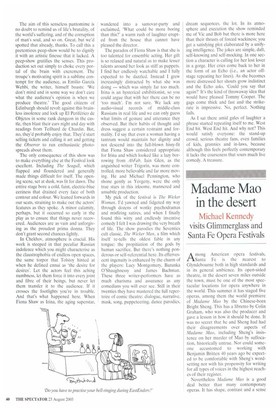 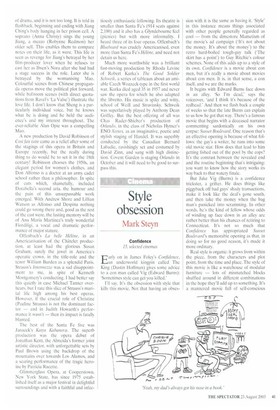 Madame Mao in the desert

Alm)"American opera festivals, Santa Fe is the nearest to Glyndebourne both in high standards and in its general ambience. Its open-sided theatre, in the desert seven miles outside the town, must he one of the most spectacular locations for opera anywhere in the world. This summer it has staged five operas, among them the world premiere of Madame Mao by the Chinese-born Bright Sheng. This has a libretto by Colin Graham, who was also the producer and gave a lesson in how it should be done. It was no secret that he and Sheng had had their disagreements over aspects of Madame Mao, including Sheng's insistence on her murder of Mao by suffocation, historically untrue. Nor could someone accustomed to working with Benjamin Britten 40 years ago be expected to be comfortable with Sheng's wordsetting nor with his propensity for writing for all types of voices in the highest reaches of their register.

Nevertheless Madame Mao is a good deal better than many contemporary operas. It has shape, contrast and a sense of drama, and it is not too long. It is told in flashback, beginning and ending with Jiang Ching's body hanging in her prison cell. A soprano (Anna Christy) sings the young Jiang, a mezzo (Robynne Redmon) her older self. This enables them to compare notes on their life, as it were, This life is seen as revenge for hang's betrayal by her film-producer lover when he refuses to cast her as Ibsen's Nora after she had had a stage success in the role. Later she is betrayed by the womanising Mao, Colourful scenes from Chinese propaganda operas move the political plot forward, while ballroom scenes (with direct quotations from Ravels 'La Valse') illustrate the love life. I don't know that Sheng is a particularly individual voice, but he knows what he is doing and he held the audience's and my interest throughout. The ever-reliable Alan Opie was a compelling Mao.

A new production by David Robinson of Cosi fan mac came as a relief after some of the stagings of this opera in Britain and Europe recently, but the really daring thing to do would be to set it in the 18th century! Robinson chooses the 1950s, an elegant period for women's clothes, and Don Alfonso is a doctor at an army cadet school rather than a philosopher. In spite of cuts which, shamefully, included Dorabella's second aria, the humour and the pain of this unsurpassable work emerged. With Andrew Shore and Lillian Watson as Alfonso and Despina nothing could go wrong there and, good as the rest of the cast were, the lasting memory will be of Ana Maria Martinez's truly wonderful a vocal and dramatic performance of major stature.

Offenbach's La belle Helene, in an Americanisation of the Chatelet production, at least had the glorious Susan Graham, surely the jewel in America's operatic crown, in the title-role and the tenor William Burden as a splendid Paris. Strauss's Intermezzo was a sad disappointment to me, in spite of Kenneth Montgomery's conducting. I had better say this quietly in case Michael Tanner overhears, but I rate this slice of Strauss's marital life high among his best operas. However, if the crucial role of Christine (Pauline Strauss) is not the dominant factor and in Judith Howarth's performance it wasn't — then its impact is fatally blunted.

The best of the Santa Fe five was Janacek's Katv,y1 Kabanova. The superb production was the opera debut of Jonathan Kent, the Almeida's former joint artistic director, with unforgettable sets by Paul Brown using the backdrop of the mountains over towards Los Alamos, and a searing performance of the tragic heroine by Patricia Racette.

Glimmerglass Opera, at Cooperstown, New York State, has since 1975 established itself as a major festival in delightful surroundings and with a faithful and infec tiously enthusiastic following. Its theatre is smaller than Santa Fe's (914 seats against 2,100) and it also has a Glyndebourne feel (picnics) but with more informality. I heard three of its four operas. Offenbach's Bluebeard was crudely Americanised, even more than Santa Fe's Helene, and need not detain us here.

Much more worthwhile was a brilliant fast-moving production by Rhoda Levine of Robert Kurka's The Good Soldier Schweik, a series of tableaux about an amiable Czech Wozzeck-type in the first world war. Kurka died aged 35 in 1957 and never saw the opera for which he also adapted the libretto. His music is spiky and witty, school of Weill and Stravinsky. Schweik was superlatively played by Anthony Dean Griffey. But the best offering of all was Chas Rader-Shieber's production of Orlando, in the class of Nicholas Hytner's ENO Xerxes, as an imaginative, poetic and stylish staging of Handel. It was superbly conducted by the Canadian Bernard Labadie, ravishingly set and costumed by David Zinn, and sung with high distinction. Covent Garden is staging Orlando in October and it will need to be good to surpass this.