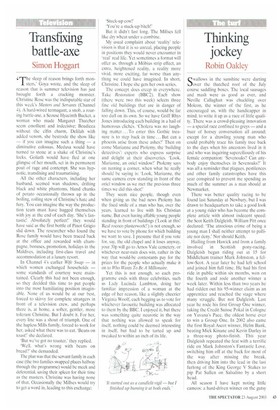 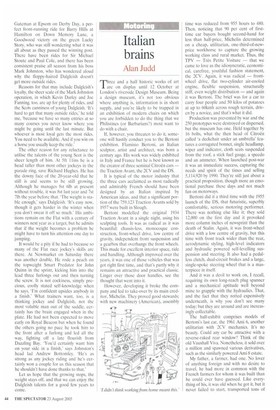 wallows in the sunshine were darting Omer the thatched roof of the July course saddling boxes. The local sausages and mash were as good as ever, and Neville Callaghan was chuckling over Molcon, the winner of the first, as he encouraged us, with the handicapper in mind, to write it up as a race of little quality. There was a crowd-pleasing innovation — a special race confined to greys — and a buzz of horsey conversation all around; except for a drawling young man who could probably trace his family tree back to the days when his ancestors lived in it and who was inquiring superciliously of his female companion: 'Sevenoaks? Can anybody enjoy themselves in Sevenoaks?' It was all a reminder that plagues, pestilences and other family catastrophes have this year conspired to prevent me spending as much of the summer as a man should at Newmarket.

There was better quality racing to be found last Saturday at Newbury, but I was drawn to headquarters to take a good look at a young rider who has become the complete article with almost indecent speed; the Scot Keith Dalgleish. William Pitt once declared: 'The atrocious crime of being a young man I shall neither attempt to palliate nor deny.' Nor should Keith.

Hailing from Hawick and from a family involved in Scottish pony-racing, Dalgleish began riding out at 15 for Middleham trainer Mark Johnston. a fellow-Scot. A year later he had left school and joined him full time. He had his first ride in public within six months, won on the fourth and rode another winner a week later. Within less than two years he had ridden out his 95-winner claim as an apprentice and reached the stage where many struggle. But not Dalgleish. Last year he rode his first Group One winner, taking the Credit Suisse Pokal in Cologne on Yavana's Pace, the oldest horse ever to win a Group One. In 2002 also came the first Royal Ascot winner, Helm Bank, beating Mick Kinane and Kevin Darley in a three-way photo-finish. This year Dalgleish repeated the feat with a terrific ride on Mark Johnston's Fantastic Love, switching him off at the back for most of the way after missing the break, then driving him into the lead in the last furlong of the King George V Stakes to pip Pat Sullen on Salsalino by a short head.

All season I have kept noting little cameos: a hard-driven winner on the gutsy Gateman at Epsom on Derby Day, a perfect front-running ride for Barry Hills at Hamilton on Down Memory Lane, a Goodwood victory on the green Lucky Story, who was still wondering what it was all about as they passed the winning post. There have been rides for Sir Michael Stoute and Paul Cole, and there has been consistent praise all season from his boss Mark Johnston, who has wondered aloud why the floppy-haired Dalgleish doesn't get more outside rides.

Reasons for that may include Dalgleish's loyalty, the sheer scale of the Mark Johnston operation, in which Kevin Darley and Joe Fanning, too, are up for plenty of rides, and the Scots canniness of young Dalgleish. 'It's hard to get that many outside rides,' he told me, 'because we have so many entries at so many courses you never know where you might be going until the last minute. But whoever is most loyal gets the most rides. You need to be available. And if you win on a horse you usually keep the ride.'

The other reason for any reluctance to utilise the talents of the young Scot is the sheer length of him. At 5ft I lins he is a head taller than most other jockeys in the parade ring. save Richard Hughes. He has the downy face of the 20-year-old that he still is and seems to be still growing. Although he manages 8st 61b at present without trouble, it was 8st last year and 7st 71b the year before that. 'The weight is stable enough,' says Dalgleish. 'It's easy now, though it gets harder in the winter when you don't sweat it off so much.' His ambitions remain on the Flat with a century of winners next year as a target, but he admits that if the weight becomes a problem he might have to turn his attention one day to jumping.

It would be a pity if he had to because so many of the Flat race jockey's skills are there. At Newmarket on Saturday there was another double. He rode a peach on the topweight Smart Predator for John Quinn in the sprint, kicking him into the lead three furlongs out and then turning the screw. It is not cockiness, simply precious, coolly stated self-knowledge when he says, I'm confident upsides anybody in a finish.' What trainers want, too, is a thinking jockey and Dalgleish, not the most voluble man out of the saddle, certainly has the brain engaged when in the plate. He had not been expected to move early on Royal Beacon but when he found the others going no pace he took him to the front after a furlong and led all the way, fighting off a late flourish from Dazzling Bay. 'You'd certainly want him on your side in a finish,' says Johnston's head lad Andrew Bottomley. 'He's as strong as any jockey riding and he's certainly won a couple for us this season that he shouldn't have done thanks to that.'

Let us hope that the growing stops, the weight stays off, and that we can enjoy the Dalgleish talents for a good few years to come.