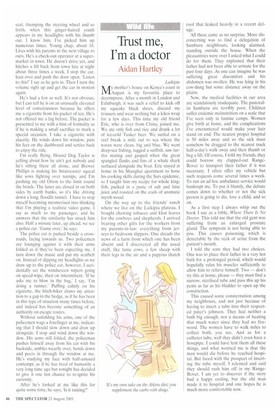 Trust me, I'm a doctor

My mother's house on Kenya's coast in August is my favourite place to decompress. After a month in London and Edinburgh, it was such a relief to kick off my squeaky black shoes, discard my trousers and wear nothing but a kikoi wrap for a few days. This time my old friend Eric, who is over from China, joined me. We ate only fish and rice and drank a lot of ice-cold Tusker beer. We surfed on a reef break a mile out to sea where the waves were clean, big and blue. We went deep-sea fishing, tagged a sailfish, saw turtles mating and gasped when the great spangled flanks and fins of a whale shark surfaced alongside the boat. Eric stayed at home in his Shanghai apartment to hone his cooking skills during the Sars epidemic, so I taught him my recipe for whole kingfish, packed in a paste of salt and lime juice and roasted on the coals of aromatic myrrh wood.

On the way up to the friends' ranch where we live on the Laikipia plateau, I bought chewing tobacco and khat leaves for the cowboys and shepherds. I arrived bearing other gifts for the workers from my parents-in-law: everything from jerseys to bedroom slippers. One dreads the news of a farm from which one has been absent and I discovered all the usual stuff, like lame cows, a few sheep with their legs in the air and a papyrus thatch roof that leaked heavily in a recent deluge.

All these came as no surprise. More disconcerting was to find a delegation of Samburu neighbours, looking alarmed, standing outside the house. When the pleasantries were over I asked what I could do for them. They explained that their father had not been able to urinate for the past four days. As one can imagine he was suffering great discomfort and his abdomen was swollen. He was lying in his cow-dung hut some distance away on the plains.

Now, the medical facilities in our area are scandalously inadequate. The pastoralist Samburu are terribly poor. Children suffer endemic malnutrition on a scale that I've seen only in famine camps. Women give birth at home, and the complications I've encountered would make your hair stand on end. The nearest proper hospital is 50 miles away and so the sick must somehow be dragged to the nearest track half-a-day's walk away and then thumb or beg a lift. Of course, I told my friends, they could borrow my clapped-out RangeRover to transport their father if it was necessary. I often offer my vehicle but such requests come several times a week. To run an ad hoc ambulance service would bankrupt me. To put it bluntly, the debate comes down to whether or not the sick person is going to die, lose a child, and so on.

As a first step I always whip out the book I use as a bible, Where There Is No Doctor. This told me that the old gent was suffering from an enlarged prostate gland. The symptom is not being able to piss. This causes poisoning, which is detectable by the reek of urine from the patient's mouth.

I told the sons they had two choices. One was to place their father in a very hot bath for a prolonged period, which would hopefully relax his muscles sufficiently to allow him to relieve himself. Two — don't try this at home, please — they must find a narrow, sterilised tube and pass this up his penis as far as his bladder to open up the constriction.

This caused some consternation among my neighbours, and not just because of having to insert a tube into their respected pater's johnson. They had neither a bath big enough, nor a means of heating that much water since they had no firewood. The women have to walk miles to collect both, you see. And as for a catheter tube, well they didn't even have a hosepipe. I could have lent them all these things, and what worried me is that the man would die before he reached hospital. But faced with the prospect of inserting the tube myself. I relented and said they should rush him off in my RangeRover. I am yet to discover if the story had a happy ending, but the old man made it to hospital and one hopes he is much more comfortable now.