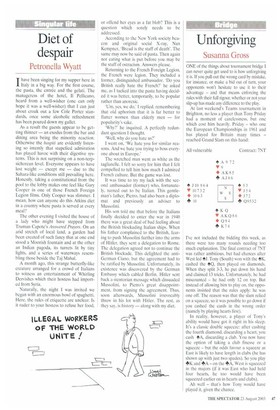 T have been singing for my supper here in 1 Italy in a big way. For the first course, the pasta, the entrée and the gelati. The manageress of the hotel, 11 Pellicano, heard from a well-wisher (one can only hope it was a well-wisher) that I can just about croak out a few Cole Porter standards, once some alcoholic refreshment has been poured down my gullet.

As a result the guests appear to be getting thinner — an exodus from the bar and dining area being the minority reaction. Otherwise the hospiti are evidently listening so intently that stupefied admiration has played havoc with their digestive systems. This is not surprising on a non-terpsichorean level. Everyone appears to have lost weight — except me — due to the Sahara-like conditions still prevailing here. Honestly, taking a constitutional from the pool to the lobby makes one feel like Gary Cooper in one of those French Foreign Legion films. Only Cooper was slimmer. I mean, how can anyone do this Atkins diet in a country where pasta is served at every meal?

The other evening I visited the house of a lady who might have stepped from Truman Capote's Answered Prayers. On an arid stretch of local land, a garden had been created of such fancy that at one end stood a Moorish fountain and at the other an Indian pagoda, its turrets lit by tiny lights, and a series of waterways resembling those beside the Taj Mahal.

A month ago, this strange butterfly-like creature arranged for a crowd of Italians to witness an entertainment of Whirling Dervishes which their hostess had imported from Syria.

Naturally, the night I was invited we began with an enormous bowl of spaghetti. Here, the rules of etiquette are unclear. Is it ruder to your hostess to refuse her food. or offend her eyes as a fat blob? This is a question which sorely needs to be addressed.

According to the New York society beacon and original social X-ray, Nan Kempner, 'Bread is the staff of death'. The same may now be said of pasta. Then again not eating what is put before you may be the stuff of ostracism. Answers please.

Returning to the French Foreign Legion, the French were legion. They included a former, distinguished ambassador. 'Do you British really hate the French?' he asked me, as I tucked into the pasta having decided it was better, temporarily, to be popular rather than anorexic.

*Um, yes, we do,' I replied, remembering that old aphorism that it is far better to flatter women than elderly men — for popularity's sake.

'Why?' he inquired. A perfectly redundant question I thought.

I went on, 'We hate you for similar reasons. And we hate you trying to boss everyone about in Europe.'

The wretched man went as white as the tagliatelle. I felt so sorry for him that I felt compelled to tell him how much I admired French culture. But the game was lost.

It was time to try my luck with the second ambassador (former) who, fortunately. turned out to be Italian. This gentleman's father, Pietro, had also been a diplomat and previously an adviser to Mussolini.

His son told me that before the Italians finally decided to enter the war in 1940 there was a great deal of bad feeling about the British blockading Italian ships. When his father complained to the British, fearing to push Mussolini further into the arms of Hitler, they sent a delegation to Rome. The delegation agreed not to continue the British blockade. This delighted the antiGerman Ciano, but the agreement had to be ratified by Mussolini. Unfortunately, its existence was discovered by the German Embassy which cabled Berlin. Hitler sent back a stentorian message which dissuaded Mussolini. to Pietro's great disappointment, from signing the agreement. Thus, soon afterwards, Mussolini irrevocably threw in his lot with Hitler. The rest, as they say, is history — along with my diet.