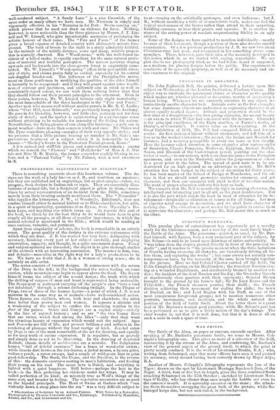 This popular place of entertainment has opportunely got a novelty ready for the Christmas season, and a novelty of the most timely kind— the Battle of the Alma. The panorama—painted, as usual, by Mr. Bur- ford himself, with figures, here a very prominent part of the subject, by Mr. Selous—is said to be based upon drawings of entire authenticity. It "was taken from the sloping- ground directly in front of the principal re- doubt" ; and it reaches to "the precise moment when the three battalions of Guards, having overcome all obstacles, are victoriously driving all be- fore them, and capturing the works" ; but some events not actually con- temporaneous have, by the necessity of the case, been brought together in the picture. Here we find Colonel Chester carried off the field ; Sir Colin Campbell cheering on his Highlanders ; the truculent Russian aim- ing at a wounded Englishman, and retributively brained by another sol- dier; the incident of the dead Russian and his dog ; the Grenadier Guards at murderously close quarters with their opponents ; General Brown brought to the ground by his horse's fall ; Sir De Lacy Evans and the Fifty-fifth ; the French steamers pouring their shells ; the French division achieving their movement for scaling the cliffs; the town of Burliuk on fire ; and Lord Raglan with his Staff, as one of the most conspicuous foreground groups ; not to mention numerous other portraits, movements, and incidents, and the whole natural dis- position of the field of battle itself. About the latter there is a great deal of Mr. Burford's wonted good painting, while Mr. Selous's part has been performed so as to give a lively notion of the day's doings. The chief wonder is, not that it is well done, but that it is done at all on such a scale in such a space of time.